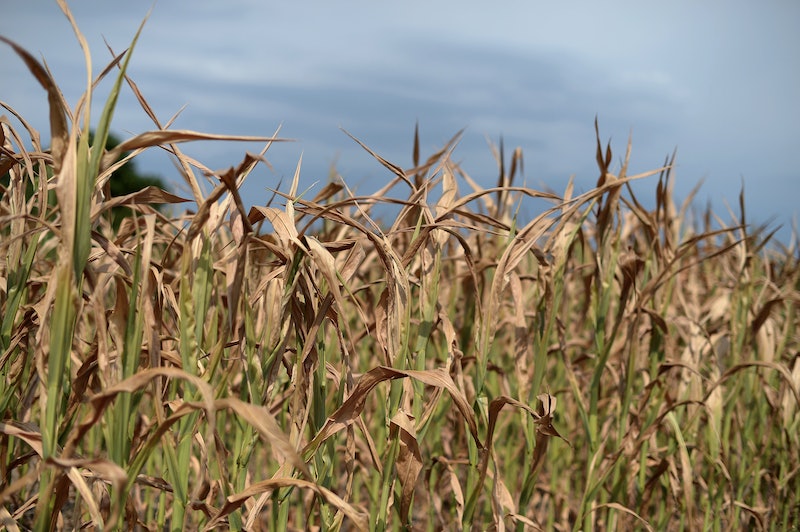 On Sunday, Hillary Clinton unveiled her ambitious climate change plan, proving that she takes the consequences of global warming seriously, and that she isn't shy about attacking Republican presidential hopefuls for ignoring science, to boot. In a Sunday campaign video, Clinton pledged to have more than half a billion solar panels installed across the country, and set a goal of having enough renewable energy to power every house in America within 10 years. It's not surprising that Clinton's advocating for climate change action, considering her super liberal leanings and work on clean energy legislation in the Senate. It also complements her gender equality platform — after all, climate change disproportionately affects women and girls across the world, including the U.S.

Clinton understands that, on top of being an environmental issue, climate change is a feminist issue. At a United Nations event in March, she said, "One area we don’t have as much data as I wish we did — and therefore don’t have the kind of clarity we need to make the case — is about the relationship between women and the environment. There is still very little sex-disaggregated data out there about these sets of issues, and that is a problem because the impacts of climate change are already shaping the lives of women and girls around the world."

Women Have Fewer Resources With Which To Adapt

While climate change will impact everyone in the world, the poor will be disproportionately affected because they don't have the resources to adapt, and most of the world's poor are women. Worldwide, women make up an estimated 70 percent of those living below the poverty line, according to Oxfam. In the U.S., the poverty rate for women is 15 percent, while it's only 12 percent for men, largely because single-parent families are at a higher risk of poverty, and most are led by women (who earn less than men). A report on gender and climate change by the World Conservation Union says: "In natural disasters that have occurred in recent years, both in developing and in developed countries, it is primarily the poor who have suffered — and all over the world, the majority of the poor are women, who at all levels earn less than men."

Women Have A High Rate Of Displacement

With climate change comes an increase in extreme weather like droughts and storms, which often forces people to flee their homes. Because they often have fewer resources at their disposal and children in their care, it's more difficult for women to find new housing. After Hurricane Katrina, there was a huge affordable housing shortage, and 83 percent of poor single mothers in New Orleans were displaced, either unable to return to the city or forced to live with family or friends.

Women Are More Likely To Die In Natural Disasters

Women and children are more likely than men to die in natural disasters, their chances as much as 14 percent higher. A paper by Soroptimist International of the Americas says, "No matter the country in which a disaster strikes, more women are at risk and continue to be at risk, during and after disasters because of existing gender inequities — they are among the poorest, lack mobility and access to resources and have increased family responsibilities." Women's responsibilities as caregivers limit their options during a disaster, and make it more difficult to evacuate.