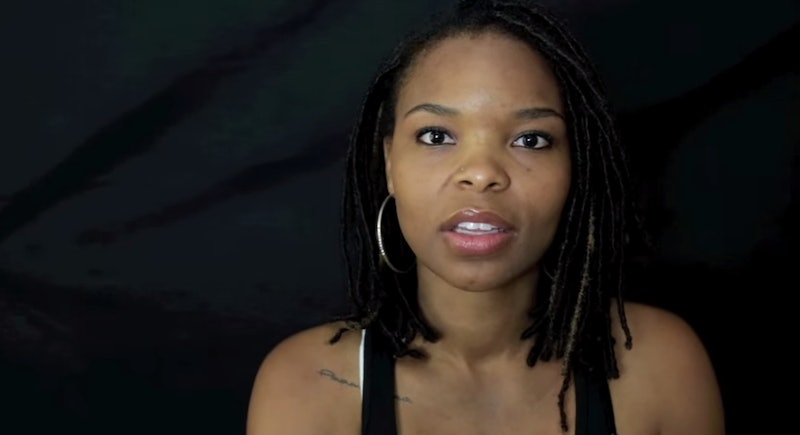 According to research, postpartum mood or anxiety disorders sadly affect 1 in 7 women pregnant and new moms, a stat we don't often talk about and too easily sweep under the rug. But this month, Jill Krause of the parenting blog BabyRabies has partnered with nonprofit Postpartum Progress to shine some much-needed light on the condition by letting the women who've suffered (and survived) tell their own tales. In a new video produced by PostpartumProgress.org, seven women share their postpartum depression stories candidly and without hesitation. In raw, emotional interviews, each mother shares just how intensely depression and anxiety enveloped them in the months after they gave birth — and they're hoping that by opening up, they'll encourage others who suffer to seek help, too.

Postpartum depression is often confused with what's commonly called the "baby blues," but in reality, PPD is far more serious. The "baby blues" are typically defined as lasting between one and two weeks and involve mood swings, irritability, and loss of sleep. In contrast, PPD involves all of those symptoms and then some, but all with much greater intensity. According to the Mayo Clinic, the symptoms of postpartum depression include loss of appetite, difficulty bonding with your baby, and incredible feelings of sadness. And these aren't just fleeting moments of insecurity, either — they're crippling lows.

As one woman shares in the video, these lows are often accompanied by thoughts of suicide.

Others struggled with intense mood swings and anger issues — and candidly admitted just how far this really went.

"I really wanted to act out this anger on inanimate objects, or on my husband. It was such a weird feeling."

One mom even described the chronic anxiety that would follow her throughout her day, preventing her from feeling "normal."

"My stomach always felt like when you miss a step when you're going down the stairs and your stomach jumps."

But in every case, there was a light at the end of the tunnel.

"Once I did get help, I knew I can always be the mom that I wanted to be."

And that was a feeling almost beyond words.

As for their advice to other moms who may be suffering the same symptoms? Whatever you do, don't give up hope — help is out there.

"You will get better, you will feel better. You feel right now like you're going to feel like this for the rest of you life, but it does get better."

Speaking with The Huffington Post last week, Krause said, "We are working to erase the stigma of perinatal mood and anxiety disorders, and to let people know where moms can start to find help. And nothing gets that point across more than the inspiring message found in the video's YouTube description, which reads: "We are strong, we are fighters, we are good moms, and we are here for you if you are struggling, too."

If you or someone you know may be suffering from Postpartum depression, call your doctor immediately. You can also find support on PostpartumProgress.org, which is loaded with helpful resources and information to learn more.