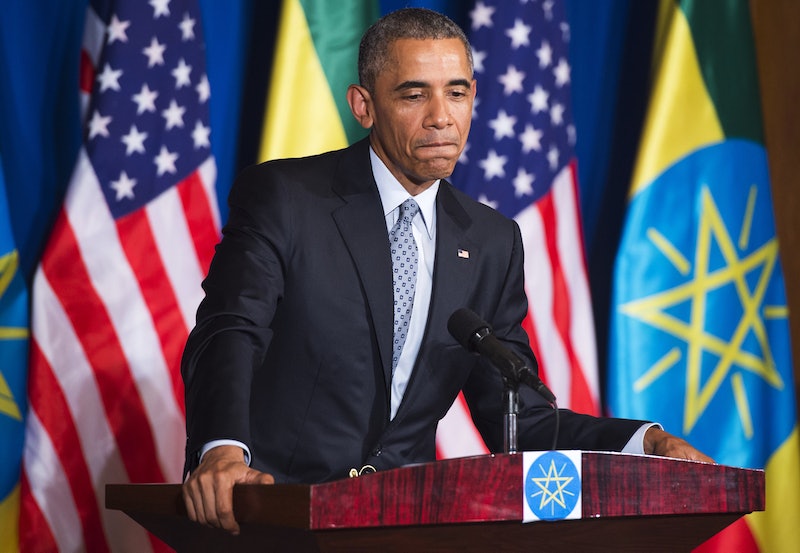 Let's face it, politicians say some cringe-worthy things. Mike Huckabee compared the Iran nuclear deal to the Holocaust. Donald Trump has said ... well, many startling things since announcing his candidacy. In fact, with these two giving each other a run for their money, not to mention the many, many other GOP candidates, 2016 is shaping up to be the most quotable election ever. In the midst of all these regrettable yet memorable statements, though, there are still plenty of times that politicians have perfectly said what we're all thinking. Take, for example, President Obama's response to Trump and Huckabee.

At a press conference on Monday, the president said that Huckabee's comment "would be considered ridiculous if it weren't so sad." He went on to accuse both Huckabee and Trump of using their sensationalist statements as a way of getting attention in a crowded field of Republican candidates.

As Trump's success in the polls suggests, candor can strike a chord with the public during an election. It's a shame that in this election, that candor has often been offensive, discriminatory, and downright politically incorrect. Instead of speaking their minds to get attention, the current candidates should take a note from some of their more preach-emoji-worthy counterparts.

1. Obama On The Dysfunction Of Congress

I want to especially thank all the members who took a break from their exhausting schedule of not passing any laws to be here tonight.

Obama made this funny jab during the White House Correspondents' Dinner earlier in 2015. Congress is planning to respond, but first they're taking a recess.

I have left orders to be awakened at any time in case of national emergency, even if I'm in a Cabinet meeting.

Sleep waits for no one, not even the president's Cabinet. Fortunately, we don't all have to wake up for national emergencies.

Slade, a former leader of the Florida Republican Party, was referring to Florida Gov. Rick Scott (pictured above) — though this same quote could certainly apply to any number of politicians.

President Truman made several memorable statements throughout his career, and this one definitely hasn't lost its relevance.

5. Bill Clinton On The Evening News

Half the time when I see the evening news, I wouldn't be for me either.

In other words, former President Clinton knows how you feel when you look in the mirror after a long night of partying.

I must confess I really did not want to be here tonight. But I knew I had to come.

Obama didn't want to be at the 2009 White House Correspondents' Dinner any more than you want to leave your Netflix marathon this weekend.

I supposed I could have stayed home and baked cookies and had teas, but what I decided to do was to fulfill my profession, which I entered before my husband was in public life.

Regardless of your political preferences, there's no denying that Clinton has a way with feminist words, speaking her mind and the mind of feminists everywhere.

That takes me back to another modern day poet by the name of Jay-Z in one of the songs he wrote: "It's funny what seven days can change. It was all good just a week ago."

Whether they're talking about Congress, their platform, or life in general, politicians can be off-the-cuff without being offensive. It's time to celebrate this sort of genuineness instead of the outrageousness that has been making other headlines lately.