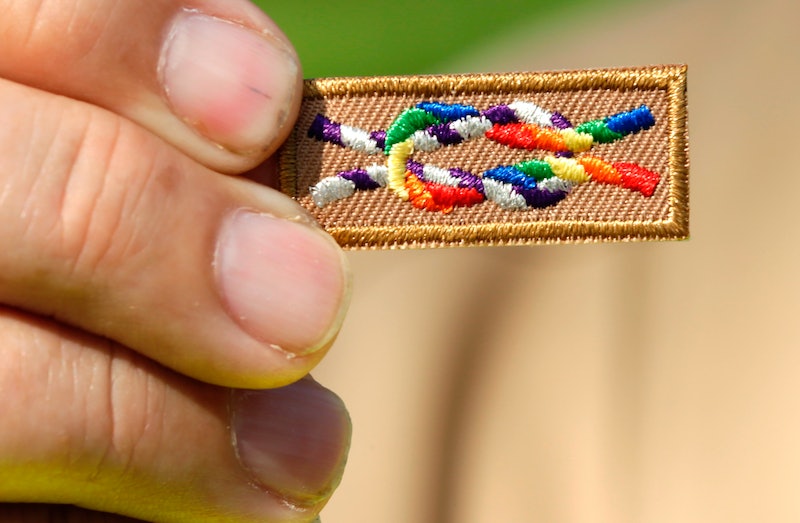 After a long, contentious debate, the Boy Scouts of America ended its ban on gay leaders with a momentous vote Monday evening. And while it's a huge step for equality among those who want to serve in a leadership capacity within the organization, it's so much more than that. In fact, there's a whole host of benefits now that the BSA's ban has been lifted. The ban was hurting the adults, yes, but the children were being unfairly punished, too. Now, boys won't be deprived of learning from excellent role models just because of their sexual orientation, and LGBT scouts will be able to find mentors and support when they most need it. Robert Gates, the president of the BSA, admitted that this has been a controversy for longer than it should have, saying:

For far too long this issue has divided and distracted us. Now it's time to unite behind our shared belief in the extraordinary power of Scouting to be a force for good.

But there's still a huge issue, as there always seems to be when the nation tries its hardest to make a step toward progress. Although the BSA will no longer allow discrimination against its paid workers or at BSA-owned facilities, local troops get to decide if they'll allow openly gay leaders. Sounds like the familiar "leave it up to the states" trope so often utilized by conservative politicians who want to appear somewhat moderate but actually aren't at all. So there's some progress, but it's not enough.

The other big issue? It doesn't seem like the BSA actually voted to lift the ban because they believed it was the right thing to do. Earlier in July, when an executive committee recommended that the organization allow gay leaders, a statement from the Boy Scouts made clear that it was proposing the change as a "result of the rapid changes in society and increasing legal challenges at the federal, state, and local levels." So the organization didn't want to get sued, likely because it knew it would lose.

For a long time, it wasn't just discrimination against gay adults. It wasn't until 2013 that the BSA allowed LGBT youths to participate. And after the scouting group's decision to allow gay and transgender children, the Associated Press reports that conservatives created a Boy Scouts offshoot called Trail Life USA, which now boasts about 25,000 members; its own badges, ranks, and uniforms; and the right to discriminate against whomever it wants.

But for their part, gay equality advocates and LGBT scouts and former scouts are staying positive, viewing the change as at least a step in the right direction. Zach Wahls, executive director of Scouts for Equality, pointed out that it's "disconcerting" that local troops get to continue to ban gay leaders, but he told The Washington Post:

What this means is that gay adults who want to get involved, and there are lots of them, they can put the uniform back on, and they can serve openly and honestly in an inclusive unit that will accept them. I couldn’t be happier about that.