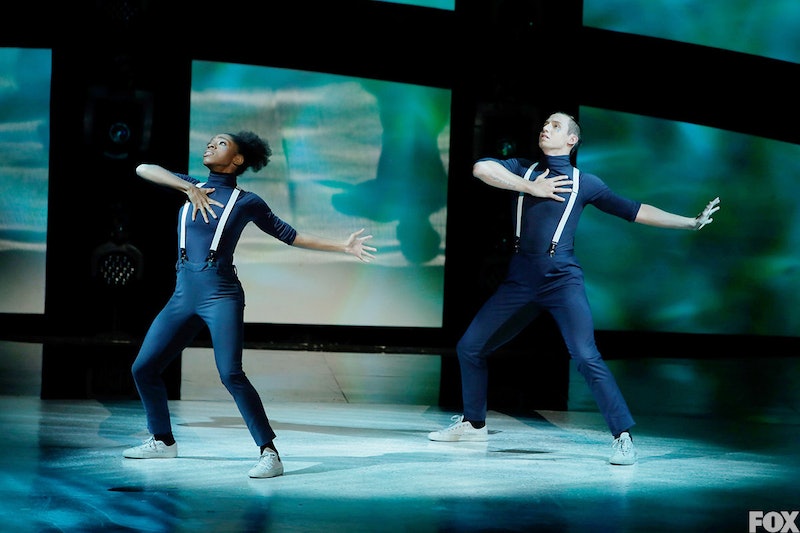 Thank goodness that America's So You Think You Can Dance fans are smarter than the judges on the hit Fox series. On Monday night's episode which features the Top 18 dancers performing some stellar and some pretty terrible routines, the Twitter Fan Vote saved Team Stage dancer Kate and Team Street dancer Ariana from elimination and rightfully so. Kate is easily one of the best stage dancers this season and Ariana deserves way more respect and way more of the spotlight than she has been receiving throughout Season 12. Unfortunately the judges were nowhere near as smart with their choices on who to save. While they rightfully picked Edson Juarez to keep dancing on the series another week over fellow contemporary dancer Moises, the judges chose to save Asaf the Hebrew breaker over his definitely more versatile b-boy counterpart Burim. What the heck was going through their minds?

The only thing I can think of is ratings. Perhaps they believed that ratings-wise, Asaf would pull in more voters than Burim, despite Burim proving that he could pick up choreography and grow better and faster than Asaf. In the previous week's rehearsal footage, we saw Asaf getting frustrated with his lack of training and the difficulty he faced picking up choreography. He once again had trouble picking up Jean Marc Generaux's Cha Cha steps. To be fair, Burim felt equally frustrated trying to pick up Monday night's African Jazz choreography. But the difference between the two dancers was that Burim kept pushing through his limitations and pulled out a great performance, unlike Asaf's Cha Cha which was dreadful.

The audience clearly knows that Asaf is not going to go all the way on the show. And he's clearly not their favorite dancer (at least not at the moment). So why save him over Burim who could gain the audience's favor as he continues to get better and stronger in other styles of dance? I'm still flabbergasted, but the silver lining is this: At least the female dancers get to fight on another day.

More like this
Travis Barker Has Been Hospitalised In California With Reports Of Pancreatitis
By Sam Ramsden
How To Listen To The 'Love Island' 2022 Soundtrack
By Liv Facey and Sophie McEvoy
What’s New On Netflix: Lana Condor’s Ghostly Comedy & A Sexy Reality Series
By Arya Roshanian
Yes, You Can Really Charter Below Deck Med’s New Superyacht, Home
By Brad Witter
Get Even More From Bustle — Sign Up For The Newsletter