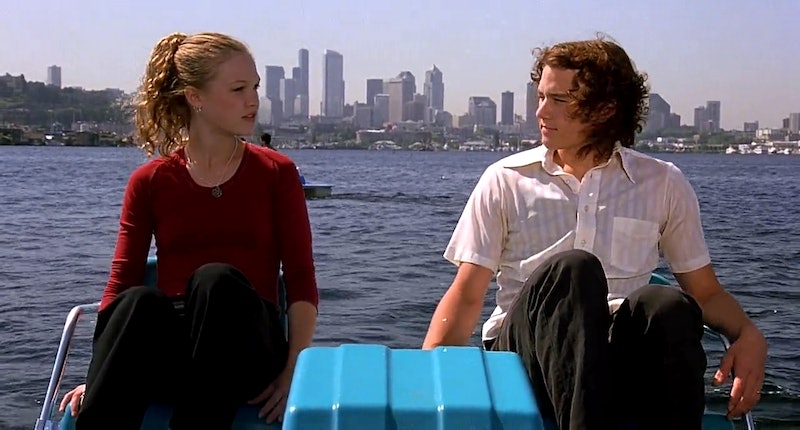 When it comes to teen movie classics, 10 Things I Hate About You is pretty much as perfect as it gets. It's got witty banter, hilarious characters, and an unlikely romance that manages to feel genuine and sweet rather than cringe-worthy. Plus, it's based on The Taming of the Shrew and there are copious Shakespearean references throughout the movie for all us literature nerds — although, like Kat Stratford, I do prefer Sylvia Plath to the Bard. So upon moving to Seattle this spring, one of my top priorities was to visit some of the 10 Things I Hate About You filming locations.

While it turns out scenes at the Stratford home and the fictional Padua High School were actually shot in Tacoma, Wash., the filmmakers did a pretty good job of shooting some of the most iconic scenes at actual beautiful Seattle landmarks. And they thankfully avoided a cliche moment of having Kat and Patrick share their first kiss atop the Space Needle — because everyone knows it's so much sexier to have a paintball war in Gas Works Park.

Sadly, since 10 Things I Hate About You released in 1999, a) I officially feel really old and b) several of the fine establishments shown in the movie have gone out of business — most notably, the bookstore where Patrick tells Kat he's misplaced his copy of The Feminine Mystique. Luckily, plenty are still around and I took myself on a tour all over Seattle with my camera in hand (actually it was my iPhone, but camera sounds more official).

Let's take a walk down memory lane for some of 10 Things best moments and the Seattle locations that served as their backdrops:

On a clear day, there's no better place than Kerry Park to get a view of the Seattle skyline and Mount Rainier. It's located in the Upper Queen Anne neighborhood of Seattle, which is largely residential and one of the fanciest areas in the city. Due to its small size (1.26 acres), the park tends to get crowded with both tourists and locals, but it's considered the best outdoor location to get a panoramic view of the city, so I get it.

My photos aren't bad (if I do say so myself), but Kerry Park looks pretty amazing with 10 Things I Hate About You written on it. How could I really compete with that? Of further note, I'd totally forgotten that "One Week" by the Barenaked Ladies was the song used for the opening credits. Talk about a quintessential '90s group... whatever happened to them, anyway?

Bianca & Cameron Plot Against Kat: The Fremont Troll (Under The Aurora Bridge)

The Fremont Troll, a mixed media statue under the Aurora Bridge, wasn't built until 1990 but it didn't take him long to become a Seattle icon. In his left hand, he's holding a Volkswagen Beetle with a California license plate — a joke from the artists due to his location below the roadway. The Fremont neighborhood is known for its artsy and funky vibe, so Bianca must have felt a bit out of place there. Its biggest shopping center is The Fremont Vintage Mall, which wouldn't be ideal for adding more Skechers and Prada backpacks to her closet. Tourists flock to the Troll to take their photos on him and there are no rules, so people climb the troll pretty freely, but this can potentially be dangerous because I witnessed a teenager fall right off the wrist portion (he was alright, so feel free to laugh).

In 10 Things, Cameron and Bianca stand in front of the Troll as they brainstorm ways to find a guy for Kat. Apparently the Troll didn't really get their creative juices flowing, because their next course of action was to ransack Kat's room for ideas of what type of guy she may be into (spoiler alert: the answer was Patrick Verona). But maybe the famed troll will work its wonders on you?

After Kat flashes the soccer coach to get Patrick out of detention (budding teen love at its finest), they go paddling on Lake Union. Swoon. As you can see, Lake Union is just as beautiful in real life, but you know what would make it even better? A perfect Aussie to paddle with.

Although you can't paddle in a boat exactly like the one Kat and Patrick used, people rent stand-up paddleboards for less than $20 per hour and kayaks are also available to rent for between $15 and $24 per hour depending on whether you choose a single, double, or triple. Although I haven't been out on the water, on a pretty day you can see many people out on their own boats or rented paddleboards and kayaks. So you could kinda have a similar date with your own Patrick Verona.

As if paddling on Lake Union wasn't romantic enough, Kat and Patrick's next stop is Gas Works Park for a serious game of paintball. Sadly, these hay bales and paint-filled balloons seem to have been nothing more than a plot device, because Gas Works Park itself looks far more like my own photo than what we saw in 10 Things. The park is open to the public all year and it's a popular location for picnics and outdoor drinking — not so much for paintball. It's still pretty cool though, because it's located on the site of the former Seattle Gas Light Company plant and pieces from the plant are interspersed throughout the 19 acre park. Still, I'm a little bummed that I'll have to Google paintball locales for when I need a perfect date spot to bring my non-existent perfect guy.

The Site Of The Prom: Paramount Theatre

This is a pretty swanky venue for a high school prom. We all remember the drama that ensued, and this is the one scene in the film where I give major props to Bianca for punching Joey not once but three times. Still, the even better moments were courtesy of Mr. Stratford before and after prom — first when he wordlessly slammed the door in Joey's face when he showed up on their doorstep, and the day after when he asked Kat if the dance was "hoppin'".

These days, it looks like you're more likely to catch Wicked at the Paramount than a set from Bikini Kill, but it's still a pretty sweet place to hang.

As much as I enjoyed traveling all over Seattle taking these photos, I have to admit that the true highlight of this endeavor was re-watching 10 Things not once but twice, and having the excuse that it was for professional reasons.