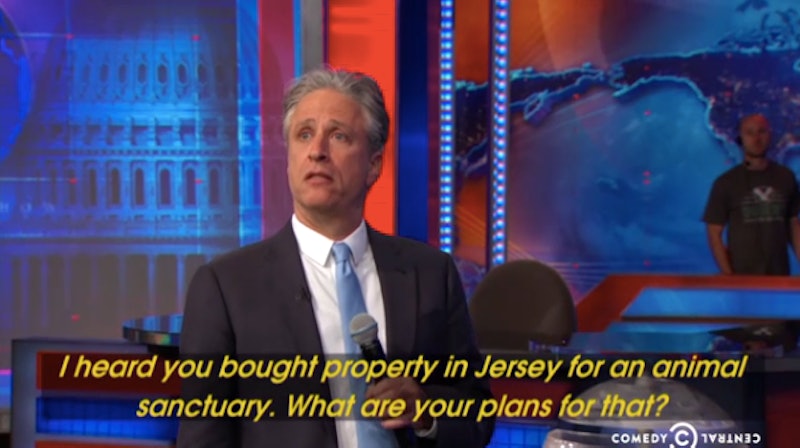 On Monday, The Daily Show released an online clip of the episode's pre-show Q&A, during which host Jon Stewart answered yours and everyone else's undying questions. Stewart has led Comedy Central's flagship series for 16 years, which means he's definitely amassed a ton of experience and perspective on his success and the show. The clip offered a great peek into what actually goes on during the show's taping, and given that you have less than two weeks to see Stewart live, in person, and manning the Daily Show desk, this might be the only pre-show experience you'll ever get.

As he paced up, down, and across the soundstage, Stewart held an in-person AMA and allowed audience members to pitch him their most pressing queries. The people didn't disappoint, touching upon key topics like Stewart's favorite unaired bit and that random purchase of an animal sanctuary in New Jersey. Obviously, Stewart is a comedian so his answers went the humorous route, but when asked about his post-Daily Show plans, he seemed to have a very clear idea on what that might be.

Is There A Piece Of Advice That You Would Give To Yourself When You First Started Doing The Show?

There's gonna be a guy in Washington Square Park. He's going to sell you some weed. Don't buy it.

Which Public Figure Has Been The Biggest Source Of Material For You?

Do you watch the show? George W. Bush did not want to invade Iraq. And then I called him and said, "Do a brother a solid."

What's The Least Fun Aspect Of Being The Daily Show Host?

The worst part about any job is that they make you go there. People say to me sometimes they go like, "When you're on vacation, does a story ever happen and you say to yourself, 'Ooh I wish I was at work?'" Never!

I Heard You Bought Property In Jersey For An Animal Sanctuary. What Are Your Plans For That?

The plans for the animal sanctuary are to bring animals there and trick them into thinking it's a sanctuary. And then just have a giant barbecue.

Are We Ever Going To See The Return Of You As A Stand-Up Comedian?

That's how I started and that's, I'm sure, that's how I will end. You know what I mean? Eighty years old, standing on stage going, "Ehh? Come on!" Guys, let me make something clear. I'm not dying.

Check out the full Q&A session below.

More like this
John Mulaney & Olivia Munn's Relationship Timeline Features The Comedian's First Father's Day
By Jordyn Tilchen
ITV’s Six Four Is Based On A Best-Selling Japanese Mystery Novel
By Sophie McEvoy
What Is the Net Worth Of Each 'Stranger Things' Season 4 Cast Member?
By Hugh McIntyre
20 Photos Of "Beefy" Jeremy Allen White To Tempt You To Watch 'The Bear'
By Radhika Menon
Get Even More From Bustle — Sign Up For The Newsletter