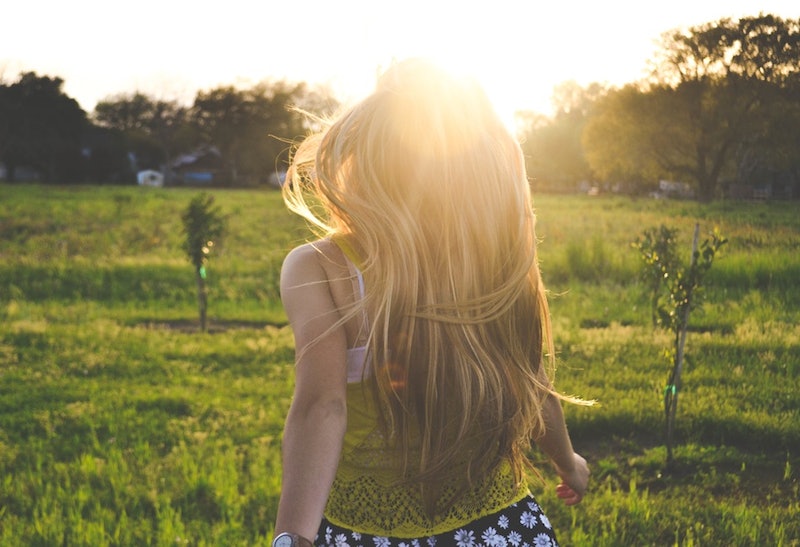 The science of happiness is an increasing field of study. We're discovering that a happy life equals a healthy and fulfilled life, and that it doesn't come from the places we'd necessarily expect. Wealth, for instance, doesn't buy happiness — which you should know if you ever read a fairytale in your life — and we now have scientific studies of mood and wealth correlation to prove it. The real ways to hack into your happiness potential? Science says it's surprisingly easy: exercise, get enough sleep, talk to your friends about your deepest fears, and give that old lady a hand across the road.

Wait, really? Yep. Mood doesn't just descend on us randomly when we wake up in the morning (unless we have mood disorders, which is another area of research entirely). Human happiness is directly related to our behavior and experiences, and shaping those can be one of the most psychologically profitable experiments you ever do on yourself.

If you really want to make a science out of it, keep a mood journal as you commit to all seven of these practices. Rate your mood over the course of ten days — science says the chances are exceptionally high that by the end, you'll have experienced more moments of sheer grin-inducing cheer than you did before. Sounds good to me.

Humans are social animals, and it seems that relationships are an exceptionally strong way of cementing our well-being and overall mood. A 2002 study of students who rated themselves as exceptionally happy showed one factor as most important above all: a tight-knit set of relationships with peers and family.

But it's not enough to just have a lot of friends — it's also necessary to develop them into intimate bonds, with serious trust and a lot of sharing of personal information. The accumulation of new Facebook friends isn't nearly as important to personal wellbeing as it is daring to be vulnerable and deepening existing relationships. Unsurprisingly, we still feel lonely and isolated when surrounded by superficial connections.

Yes, your mother is right. You are cranky as hell without the right amount of sleep, and it's possibly taking a toll on your mood when you're made to suffer through it repeatedly. A 2015 study surveyed 7000 American adults for their sleep length and average feeling of wellbeing, and guess what? The longer they spent in the sack snoozing, the better they felt.

There's a catch, though: the research wasn't able to figure out which one came first, the chicken or the egg. Do happier people get better sleep, or is happiness a result of better sleep? Either way, it seems like good sleep is a habit of happy people — so go ahead and hit the snooze button.

3. Good weather? Get outside.

Twenty minutes outside in sunny weather — yes, that's all — has been shown to boost mood and make you feel happier all day. It's a small enough amount of time that it can be fitted into a 9-to-5 schedule, but the results are, as they say in science, significant.

And if you're interested, there's actually an optimum temperature for human happiness. Obviously it's an average — I love roasting in hot temperatures, while my husband reacts to heat like a frazzled polar bear — but maximum happiness is apparently achieved at just 57 Fahrenheit. I guess we all like snuggling.

There's a reason why acts of spontaneous kindness go viral so quickly: humans get a mood boost from doing good. A 2010 study measured the moods of a study group as they either committed acts of kindness over ten days, did something new, or changed nothing. After the ten days were up, the results were pretty clear: doing an act of kindness once a day was a significant and lasting mood boost. So volunteering, altruism, and helping those around you is going to give you benefits as well.

And, incidentally, it's in your best interests emotionally and health-wise as well; a 2013 survey of past studies on altruism and health showed that generosity and its resulting happiness may also be linked to physical resilience to disease.

You knew this one was coming. Remember Elle Woods' immortal (and, it seemed, ridiculous) idea that an exercise instructor couldn't be a murderer because "Exercise gives you endorphins. Endorphins make you happy. Happy people don't shoot their husbands, they just don't"? She was onto something. Exercise is particularly recommended for people suffering from depression and other mood disorders, as the endorphin high does actually improve mood.

The endorphin rush produced by exercise is actually meant to dull pain and reduce the impact of the body's stress response — but its wonderful side effect is euphoria, and regular exercise (perhaps 20 minutes a day) prolongs that effect.

6. Give and receive hugs.

If you haven't heard the "eight hugs a day" mantra, consider this an introduction to what's meant to be a life-changing idea. At a 2011 TED conference, neuroeconomist Paul Zak raised the idea of boosting moral behavior and happiness by raising the levels of oxytocin in the human body. Known as "the cuddle chemical," it's also intimately related to human happiness — and Zak prescribed eight hugs a day to get it pumping and make ours a happier, better world.

Hugs, it seems, aren't just a good pastime; they're a genuine mood-boosting tactic. Hugging releases oxytocin to make us bond with the hugger, which lowers our stress and lifts our overall mood. So hug a stranger today! (Just ask first.)

This may be a surprising one, but being engaged in any political activity, and therefore feeling like you're contributing to the bigger picture, has been linked to higher happiness levels. Activists aren't just putting on those smiles as they hand out leaflets — they're genuinely feeling more positive about life.

But why gender equality? Because it appears that a society in which women enjoy greater equality improves overall happiness levels — not just for women reaping the rewards of greater empowerment, but for men, too. A whole lot of factors feed into this happiness improvement, from lessened economic stress when women can work to higher overall education levels, but it's definitely something to aim for. So those are two excellent reasons to go to your nearest feminist action group — and take your male friends along, too. You'll all feel better while you're making a better world.

More like this
How Ovulation Affects Your Sense Of Smell, Libido, & More
By JR Thorpe and Lexi Inks
An Expert Weighs In On The Viral Raw Carrot Salad Trend
By Alexis Morillo
Courteney Cox & Laura Dern Proved Their BFF Status With Matching Tattoos
By El Hunt
How Many Burpees Should You Do Per Day? Here’s What Fitness Trainers Say
By Carolyn Steber
Get Even More From Bustle — Sign Up For The Newsletter
From hair trends to relationship advice, our daily newsletter has everything you need to sound like a person who’s on TikTok, even if you aren’t.