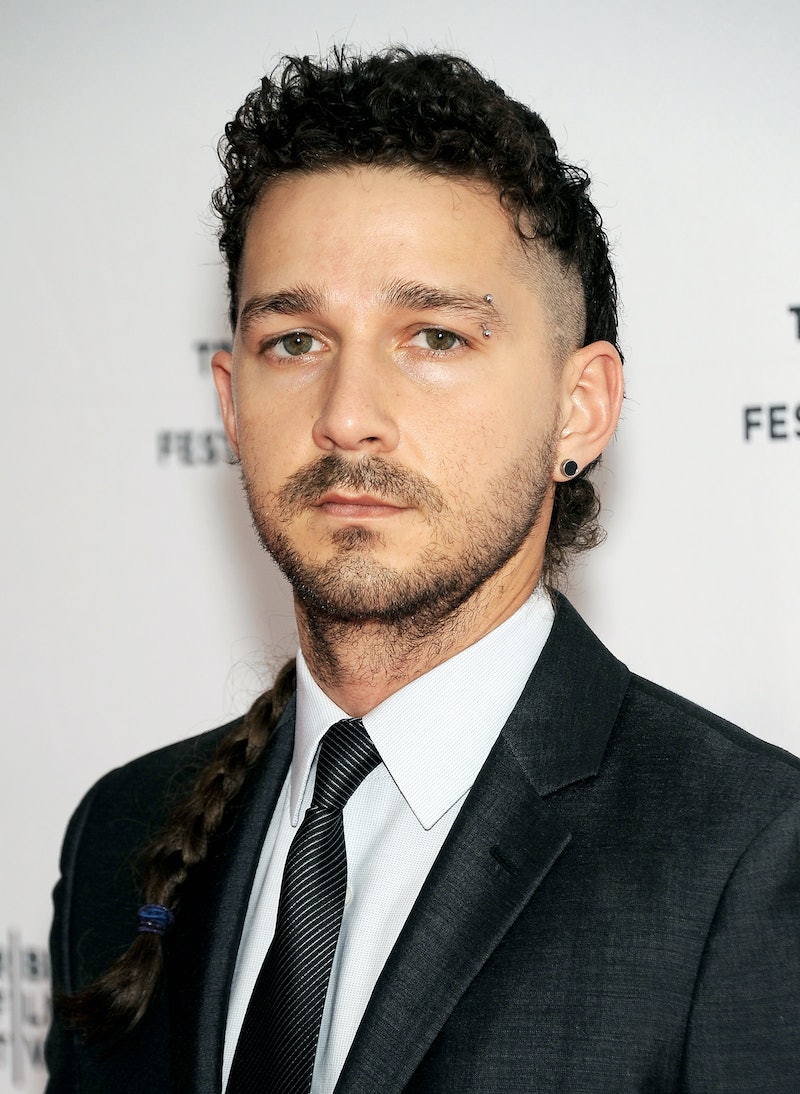 Shia LaBeouf, famous for being either a genially crazy buffoon or bizarrely insane depending on your choice of news outlet, has been shown in a video fighting with his girlfriend, Mia Goth, in Germany this week, and we need to talk about what he said. While the causes of the fight itself are unclear, and LaBeouf is slightly slurring his speech, it's still possible — and necessary — for us to address what came out of his mouth while being recorded. Because, even in complete isolation from any context, four sentences in particular are so chilling and deeply messed up that they demand a discussion.

The video obtained by Entertainment Tonight shows the two outside a German hotel, late at night, getting out of a cab and fighting. LaBeouf says several alarming sentences in quick succession. First he says to Goth, “I don’t want to touch you. I don’t want to be aggressive.” This is quickly followed by "This is the kind of sh-t that makes a person abusive." Once he's driven away as a passenger, he tells the strangers filming that “I don’t want to hit a woman, but I’m getting pushed" and that he "would have killed her." Let that just sink in for a minute. LaBeouf and Goth have not issued statements to the media about the incident, and neither of their representatives responded to requests for comment by press time.

It's not a type of world view that will be foreign to many women. Over 38 million American women have experienced violence from their intimate partners in their lifetimes, according to the Center for Disease Control And Prevention, and it's estimated that it will happen to over four million women every year. Those words by LaBeouf point to an extremely troubling set of ideas about women and the choices behind physical abuse — and it's clear that they need to be understood in the clear light of day.

"I don't want to hit a woman, but I'm being pushed"? Think about the power dynamics in that sentence, the mix of supposed agency and inevitability.

But he didn't actually hit her, you might say. He left. What's the issue?

Here's the problem, and it's a big one: LaBeouf is implying in the video that it's possible to goad somebody into abusing them. Based on his words, there's some kind of "line" that can be crossed by a person, and that crossing it explains why somebody would hit them. Get in a person's face? Refuse to stop doing something that pisses them off? Congratulations: you've "pushed them too far," and now you've been hit.

This is a common myth about abuse that pins the blame for abusive behavior in one place: the person who's being abused. "I don't want to hit a woman, but I'm being pushed"? Think about the power dynamics in that sentence, the mix of supposed agency and inevitability. It suggests that almost all the power in the situation lies with the abused person, because they can decide to stop at any time. The abuser, meanwhile, is beyond the point of self-control. This is a completely false image of agency.

I don't care if a person acts like an utter bitch for 16 hours: there is no situation, none whatever, in which a person deserves to be abused or fear being killed. And telling them it's their fault? At best, it's a d*ck move; at worst, it's part of a serious cycle of abusive blame and shame.

Abusers are not the victims of pressure that suddenly make them explode. They are not "pushed" to a point where they can no longer make the decision to act like decent human beings. They do it on purpose, and making us feel like it's our fault is part of the abuse.

Moving the blame for abuse from the person with the fist to the person with the bruise is an integral part of many abusive patterns, as reported by Women's Aid. The abuser may even "forgive" the abused person for prompting them to commit such heinous behavior. This blaming can take heavy root in the abused person's mind, and transform into an incredible sense of shame and guilt, according to the Australian Institute Of Family Studies. Convincing yourself that your suffering is all your own fault, and that it can be fixed if you somehow do better is a key component of abusive control.

Shame, according to mental health studies provided by Mental Healthy, prevents abused people from seeking help or confiding in professionals, or even confronting the fact that an abusive pattern exists. This is what LaBeouf, willing or not, was perpetuating: the idea that "this [Goth's behavior] is the sh*t that makes a person abusive." That it's her fault, and he's just an innocent victim. To which I say: f*ck off. Abusers are not the victims of pressure that suddenly make them explode. They are not "pushed" to a point where they can no longer make the decision to act like decent human beings. They do it on purpose, and making victims feel like it's their fault is part of the abuse.

This has to stop, because it's highly dangerous. It's how we come to this statistic from the National Network to End Domestic Violence: three women in America are murdered by a current or former male partner every day.

But how can we make it stop? The first step is facing the shame of abuse head-on and publicly. The 35 women accusing Bill Cosby of sexual assault on the cover of NY Mag this week are making the communal decision to stop blaming themselves and step into the spotlight. In response to the allegations of rape and sexual assault, Cosby’s lawyers released this statement in 2014:

When a 2015 report from the Associate Press unveiled documents from a 2005 deposition in which Cosby admitted to obtaining quaaludes to use to have sex with women, his lawyers released another statement:

Much like the Cosby case has sparked a larger dialogue about sexual assault, it's my hope that, perversely, LaBeouf's statements and why they're horrible might go viral, raising awareness that the abusive cycle is not only common, but completely unacceptable. Best use that fame for good.