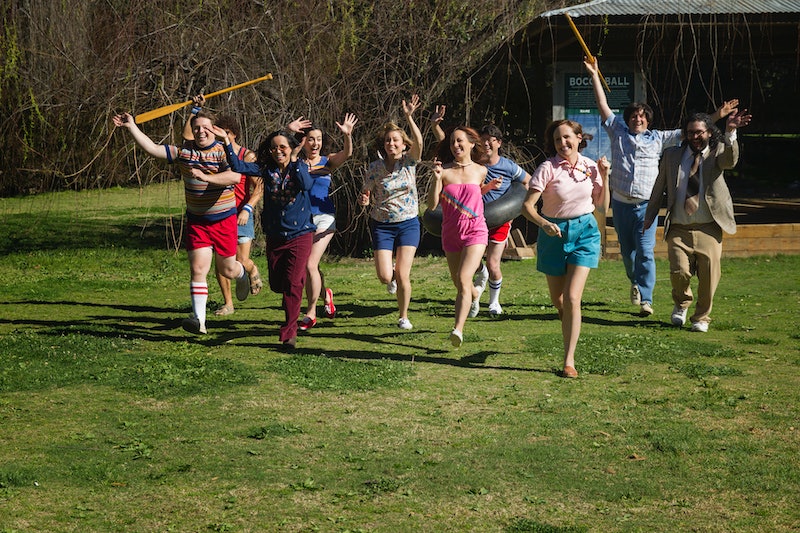 I think you can divide the world into two types of people: those who loved going to summer camp, and those who loathed it. I was in the latter group. I worked hard in school and thought I deserved to do nothing in the summer. My parents disagreed, but when my day camp called them to tell them that they found me at the mall instead of the required music session, they relented. That doesn't mean I don't have a deep, abiding love for Wet Hot American Summer. So Netflix's prequel series, Wet Hot American Summer: First Day of Camp, gives me the feeling of returning to the beloved summertime oasis that I never had. And, like a real camp, there going to be a few new faces mixed in with the old — all the old! — ones. So, who makes a cameo in Wet Hot American Summer ?

I'll give you a hint: there are a lot of comedians. But there are a few surprising faces in there, too. You get the feeling that everyone just wanted to work with all the funny people involved — any actor would really kill to do a cameo in the series. There are a ton of cameos, and I don't want to spoil all of them, so here are a few I was able to root out just from the two trailers that the series put out before its July 31 release.

There are tons of exciting newcomers who are in roles bigger than cameos. Since they include Kristen Wiig, Jason Schwartzman, Michaela Watkins, John Slattery, Lake Bell, and Jordan Peele, I'm really glad they have more to do than just walk on for a few seconds, stick around for one joke, and leave. This cast was already stacked, and now it's just kind of ridiculous how many people are in it.

I think there's a contest between Chrises Pine and Hemsworth to see how many comedic roles they can sneak in between their leading action-hero gigs. Hemsworth is in the most recent versions of Vacation and Ghostbusters, and Pine had Into the Woods, Horrible Bosses 2, and, now this, where he gets to be some kind of cool, mysterious guy.

Is there some kind of Netflix exchange program? Arrested Development really kicked the Netflix original programming into high gear, so it makes sense that Wet Hot American Summer would import one of its stars. Let's hope a cast member from Orange Is the New Black isn't too far behind — to me, summer camp and prison were basically the same thing.

This also makes sense. All comedians this day and age love Weird Al. I bet he loves Wet Hot American Summer. And it's always nice to see him turn up.

Was he not in the original? (There's so many of them, it's hard to keep track.) He's not, but his '80s aesthetic fits right in, so it's like he should have been. I consider this correcting a past wrong.

Kenny is a member of The State comedy troupe, like Wet Hot director David Wain and actors Michael Showalter, Jo Lo Truglio, Michael Ian Black, and Ken Marino, so she was bound to turn up at some point. And, if you haven't seen any of The State, that means there's way more comedy out there that you should look up and start watching right now. I'm serious; it's hilarious.

Obviously. Now, when I see that there's a brilliant comedy coming to TV, I just sort of expect John Hamm to pop up it in it — call it the Kimmy Schmidt Effect. Knowing that Slattery is in the cast makes it a given. But, if it were up to me, Hamm would cameo in every TV show ever, so I'm glad he's turning up in Wet Hot American Summer.