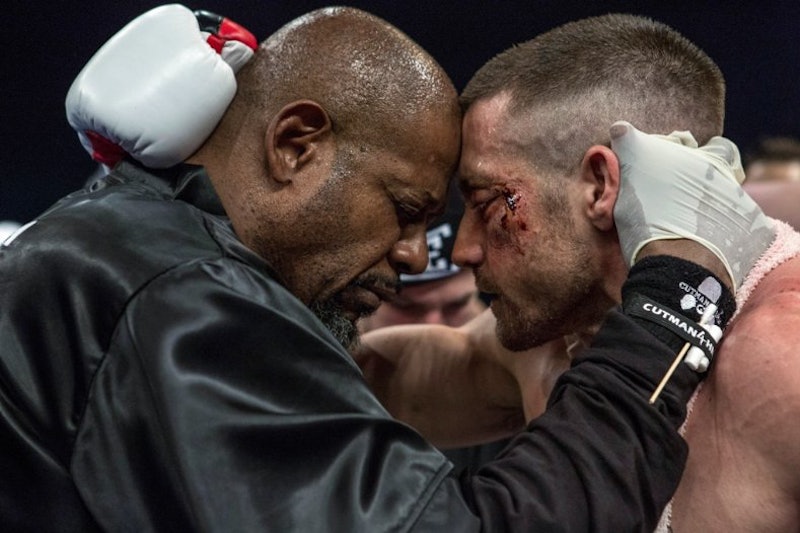 If you go to see Southpaw, the Jake Gyllenhaal boxing film that opened last week, you'll notice something striking at the end of the film. The movie finishes with a brief dedication to James Horner, one of the most prolific composers working over the past 40 years, and the man responsible for the Southpaw score. Despite his high-profile resume, though, audiences will likely still leave wondering, whoo is James Horner?

If you know Titanic, you know his work. The late composer, who died tragically earlier this year in a plane crash, is perhaps best-known for "My Heart Will Go On," the Academy Award-winning song he wrote for Celine Dion. During his life, Horner racked up no fewer than 50 awards for his music, including two Oscars, two Golden Globes, and countless ASCAP and Academy of Science Fiction, Horror, and Fantasy prizes. And despite his untimely death, Southpaw isn't the last time you'll hear his magnificent work. Antoine Fuqua, the film's director, learned earlier this month that Horner had secretly written the score for his upcoming Magnificent Seven remake. He had already committed to working on the film many months back, but according to Movies.com, Horner was so inspired when he read the script that he began writing music for the film immediately. Wanting to surprise Fuqua, he finished an entire score before his death, based off the script alone.

Horner was also inspired by Southpaw — Fuqua reports that the composer paid his entire crew out of pocket because the film's budget was so tight Fuqua had no funding remaining for the score. He was known for his seemingly supernatural sense of what a film needed, and the resulting score for Southpaw , which The Hollywood Reporter described as running the gamut from “moody to rap," is the perfect example.

Below, seven examples of his previous work that even better show off how Horner was one of the most productive and most sensitive composers of contemporary film.

It's eerie, haunting, terrifying — in short, everything that the Sigourney Weaver franchise was, too. Equal parts loud crashes and delicate violins, Aliens only leaves me wishing Horner had scored the original Alien film, too.

I'll take "If We Hold On Together," the Diana Ross-sung Land Before Time theme song, over "My Heart Will Go On." Any day. It's shamelessly sappy, but it perfectly suits the dinosaur tearjerker it appears in.

It starts with a low rumble. Then the brass section comes in. An appropriately majestic, triumphant melody for a film that tells the true story of a NASA mission that almost went horribly, horribly wrong. Tom Hanks stars in Apollo 13 as the mission's commander, Jim Lovell, who lands the space craft safely after delivering the iconic line, "Houston, we have a problem." Horner's score is perhaps not as deeply ingrained in the popular imagination as that quote, but it still holds up 20 years later.

It seems that 1995 was a pretty big year for Horner, who, in addition to Apollo 13, scored Braveheart, Jumanji, and Balto. Like The Land Before Time, Balto was one of those films that left an indelible mark on my childhood. In retrospect, its blend of live-action and animation is a bit unnerving, and as far as animal quests go I still prefer The Lion King, but it possesses a nostalgia factor I have to respect. And the score is sublime.

For all his work on animated films like The Land Before Time and How The Grinch Stole Christmas, Horner definitely found his niche with the grand epic. The score for Troy demonstrates this as well as Titanic, Apollo 13, and Aliens before it. It's definitely emotionally manipulating, but I can't imagine these films any other way.

Jodie Foster, Peter Sarsgaard, Sean Bean — James Horner? The composer finds his way alongside the most recognizable names in film time and time again, and even though Southpaw audiences might not immediately recognize him by name when the closing credits of this drama roll, they'll certainly have heard his work before.

Every year seems like it was a big year for Horner (even 2015, since he has multiple films coming out posthumously), and the early 2000s were a frenzy of big-name films from Flightplan to The New World to Mel Gibson's Apocalypto. But Horner set the Apocalypto score apart from his previous work with its seamless blend of nature sounds alongside a melodic backdrop, setting an immersive aural scene for the already visually grand film. About a minute into the first track, a low, droning voice enters the scene, heralding the human presence about to enter.

Over four decades, Horner's music was present in countless great films, from historical dramas to thrillers to animation. After his death, commemorations and homages from family, friends, and co-workers flooded the media, demonstrating the wide reach his music had. Luckily, there's still a bit more to come with The Magnificent Seven later this year.