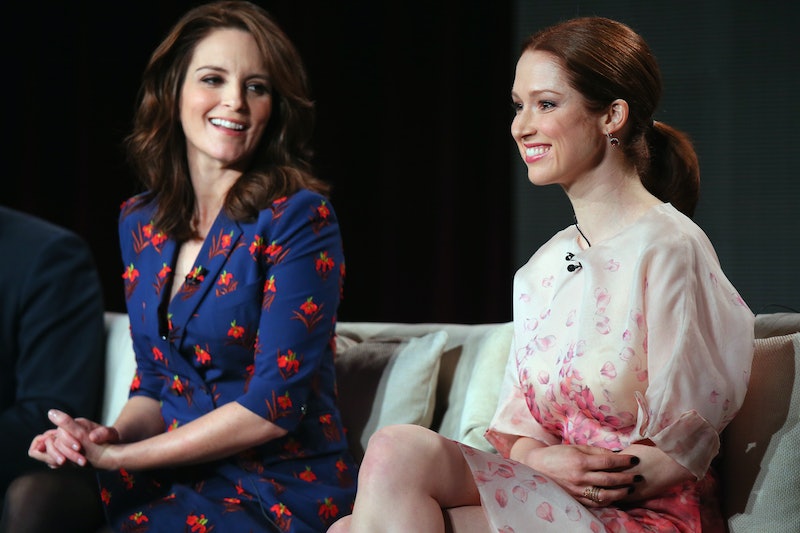 This year Ellie Kemper took the world by storm for her title role in the Netflix series, Unbreakable Kimmy Schmidt— and, though we're still far off from its premiere, I'm pretty sure it's safe to say Kemper will repeat the trend with Unbreakable Kimmy Schimdt Season 2. Not only does the show have the powerful writing of Tina Fey behind it, but it's also got a strong cast, a ton of critical acclaim, and, most importantly, a promising Season 2 plot. Case-in-point: During Tuesday's Television Critics Association press tour panel, Fey spoke on Unbreakable Kimmy Schmidt 's growing popularity, as well as some possible changes the series plans on making for the next season.

Spoiler alert, there aren't many. Don't fix what ain't broke, you know?

Even though the show has more wiggle room to play with plots and characters in its second season, Fey stated during the panel that she doesn't want to stray too far from what made the show great in the first place, which is its playful tone. But, just because the show will keep its PG rating doesn't mean Kimmy won't face a few obstacles along the way. As Fey explained, according to The Hollywood Reporter :

Just because we ended season one with the trial, she would love to put that behind her, but some new obstacles may present themselves before she can go on and live a fully realized life. She's sort of in a big hurry to get everything she wanted out of life and hitting some speed bumps along the way.

So the big question here is... what obstacles lie in store for Season 2?

Dong Is Married To Another Woman

In the Season 1 finale, Dong revealed to Kimmy that he married Sonya from GED class to avoid being deported. Talk about a tough pill to swallow! This will definitely cause a strain on Kimmy's newly romantic relationship with him, to say the least.

Not only did she lose her boyfriend, but odds are she probably doesn't have a job either. Since Jacqueline returned to South Dakota, Kimmy could be out of a nannying job next season.

And, if Kimmy is unemployed... no job means no money. How would she pay her rent? That'd be sure to cause a strain between her and Titus. (Also, there's the possibility she could get dragged into some more drama with him now that his long lost wife in back in the picture....)

It's no secret that Kimmy's step-father and sister were a little kooky... but what about her mother? According to Kemper during the TCA panel, we will meet Mrs. Schmidt next season. That face to face reunion will definitely pull some heartstrings.

Kimmy's Secret Is Out

After the televised trial, everyone knows Kimmy is a mole woman — including her new friends. She'll no longer be able to live under the radar, which could be a scary thought.

Dealing With The Aftermath Of Her Imprisonment

Speaking of problems, last season Kimmy was dealing with some major PTSD following her imprisonment, which included her sleeping with a knife — amongst other things. This is something she will probably be deeply dealing with as Season 2 premieres.

Starting Over From Scratch... Again

When she moved to NYC, Kimmy vowed to create a new life for herself. But, now that the trial is over, Kimmy has to start over again — and this isn't necessarily a bad thing. She can finally start living her life, which is both refreshing and scary.

Unbreakable Kimmy Schmidt Season 2 is set to premiere in full on Netflix sometime in late 2015.