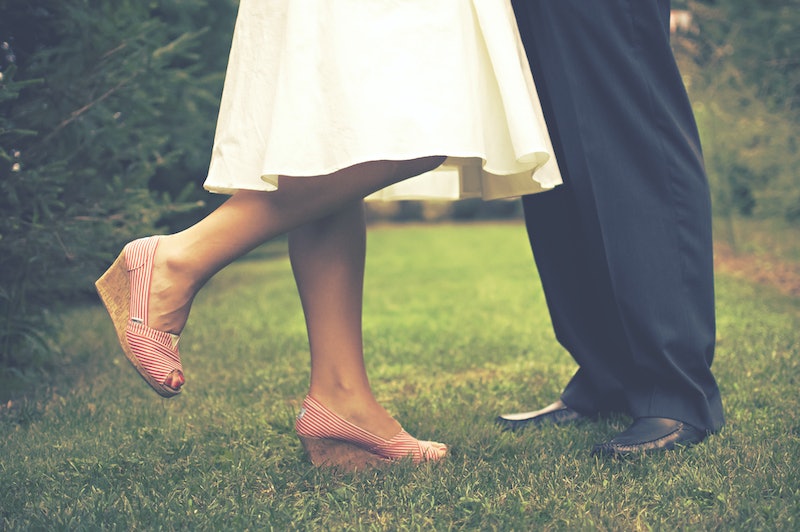 As someone who’s attended her fair share of weddings over the years, I can say one of the most daunting aspects of attending a wedding is deciding what the hell I'm going to gift the bride and groom. Other than my presence, of course. If your friends or relatives are millennial babies, then chances are you’re better off skipping the appliance section at the store and heading to the ATM to take out a Benjamin or two, because according to wedding experts, millennials want cash for wedding gifts.

As reported by The New York Times, wedding experts like Nina Vitale, who oversees weddings at the Mirbeau Inn & Spa in Skaneateles, New York, are changing traditional wedding settings in order to suit this generation of marrying couples. Gone are the days when guests place their gifts on a gift table. In place, Vitale has set up cardholders due to the fact that more people give cash or gift cards. Casey Resse, a hotel wedding specialist in Chattanooga, Tennessee, even told The New York Times that nowadays, gift tables usually go empty and that, “one couple posted on their wedding website that they would rather receive monetary donations than anything else.”

According to Jason Dorsey, the chief strategy officer and a millennials researcher at the Center for Generational Kinetics in Austin, Texas, since most millennials are choosing to get married later on in life, chances are, they already own their own houses, which are complete with the typical furnishings. Because of that, they don’t need to register for things such as coffeemakers and place settings because they probably already have them.

More millennials are cohabiting before marriage than ever before. Arielle Kuperberg, an assistant professor of sociology at the University of North Carolina at Grennsboro, whose current research includes cohabitation and marriage since the 1940s, says that because millennials are older when they get married, they’re in the “independent life stage.” Because of that, asking for cash is just more practical.

“[Millennials] ask for cash because they often have no savings and may want to buy a new home together or be prepared for an emergency situation,” Kuperberg says to the New York Times.

Because wedding-gift giving can be stress-inducing and millennials are a different kind of bunch, here are some etiquette tips for gift giving, according to wedding experts.

How Much To Spend:

What Experts Believe You Should Spend: It’s pretty agreed upon by wedding experts that the closer you are to the bride or groom, the more you’re expected to give. Obviously. I mean, you’re not going to be shelling out a couple hundred bucks for that cousin who you may or may not get along with when you gave your own sister one of those “sentimental” gifts. Not that there’s anything wrong with that of course. But there’s another time and place for that, and as some wedding experts would say, it’s not at a wedding.

In fact, Kristen Maxwell Cooper, deputy editor of notable wedding site TheKnot.com, has guidelines for how much you should be spending on wedding gifts:

How much people actually spend: According to a 2013 American Express survey, when it comes to spending on wedding gifts for the various people in one’s life, people actually seem to follow the spending guidelines. For a close family member, people will spend an average of $179 on their wedding gift. They will spend an average of $119 on a close friend, $114 on a relative, $79 on a friend and $66 on a coworker.

So we all now know that millennials would prefer cash. But what happens if a couple has a registry in place? Is it OK then? According to wedding etiquette expert, Lizzie Post, it totally is! Post says to Time.com, “I don’t think anyone is going to turn down cash. At the end of the day, if they have cash leftover, then they can go get the wedding registry items they didn’t receive.”

If It’s A Destination Wedding, Adjust Your Budget Accordingly

Destination weddings have become increasingly popular over the years for the fact that it provides couples with a cheaper alternative to getting married than at home. But with destination weddings, there may be extra costs for guests to actually travel and stay there. Because of that, it’s okay to adjust your wedding gift budget. Nancy R. Mitchell, a protocol and etiquette consultant says to Time.com, “You should never feel bad if travel costs impact your gift budget. If you’re spending money to be there on their day, that is a huge contribution already. It is more important that you give within your means.”

If you're part of the bridal party, chances are, you're probably already spending a good amount of money as well as time for the wedding. As etiquette will have it, that doesn't mean you are exempt from the gift giving. When it comes to weddings, time isn't necessarily more valuable than treasure. In fact, according to The New York Times wedding columnist, Peggy Post, bachelorette parties and bridal showers are actually optional and completely up to the bridesmaids. Gifts, however, are not. Since being part of the chosen few for a bridal party is not only an honor but a huge burden on your bank account, try pooling together with other bridesmaids. Commemorative or sentimental gifts can be a great option that could mean much more to the couple than something a couple hundred dollars will buy.

What happens if you're looking through the registry and are not finding anything that you want to buy? According to Jodi R.R. Smith, the owner of Mannersmith Etiquette Consulting, do what you want. Smith says to RealSimple.com, “Registry items are merely suggestions not obligations.” So don't feel like you're restricted by what a couple thinks they want.

Kristen Ley Green, a wedding specialist behind wedding PR and marketing company Something New For I Do, and fellow millennial newlywed offers Bustle readers this tip: "Finding an item on the registry that is in your budget without looking cheap can be difficult. A money savvy way to buy the couple something they want without breaking the bank is to pick out an item that is about two-thirds worth of the amount you have to spend, and then use the remaining one-third to buy smaller items that go with it. For example, if a bride registers for expensive bakeware, buy her one of the smaller items (like a cake plate) and then get her an inexpensive cake decorating kit to go with it. If the couple registers for grilling items, go for the utensils they need and then supplement with gourmet seasonings, sauces and dry rubs."

The common belief is that people have up to one year’s time to send off that wedding gift. But Peggy Post says to FoxNews.com, that not good wedding etiquette. In fact, Post says that's a myth. “One year is actually really long. Try sending the gift as close to the wedding as possible. It’s good manners.”