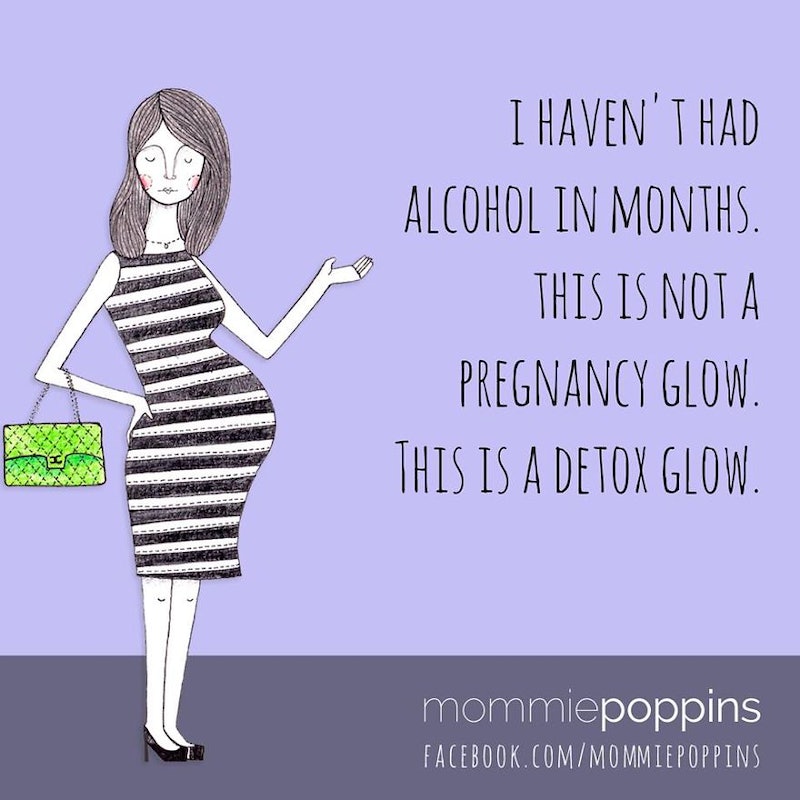 There's no denying pregnancy is an insanely awesome experience. I mean, you're growing a human inside of you — that's some pretty intense sh*t right there. But ask any woman who's been pregnant before what her honest thoughts are about it, and she'll likely give it you straight: pregnancy kind of sucks. Like, a lot. There's the feet swelling; the constant peeing; the fact that basically, NOTHING. EVER. FITS.; and oh yea, the nausea. (Need I go on?) The Facebook page Mommie Pickles has dropped some seriously hilarious pregnancy memes to call out all those little pregnancy truths no one talks about enough — and each one is more awesome than the next.

The hilarious mind behind it all is Meghna Shah, who teamed up with an artist at Handmade by Ridhika to share her tiny little truth bombs about pregnancy with the world. As Shah tells Bustle, the idea came to her when she first became pregnant with her now-4-month-old son last year. "I realized quickly that pregnancy is really hard," she says. "You go through all these physical and emotional changes that are difficult to understand, and since alcohol is not an option, having a sense of humor is sometimes the only way to get through the day."

Yep — having a sense of humor is definitely Shah's forte. Here's a quick sampling of the more popular memes on her Mommie Pickles page, which the mom of one officially launched just last month.

First up? The myth that everything is super magical during pregnancy when, in fact, you can't stop farting, and you pee more times a day than your 85-year-old grandpa.

And let's not forget that giving up alcohol for 9 long months is super super hard, you guys. But hey, at least it has some benefits...

Shah also calls out just how weird sonograms really are — and how no one really admits they can't see a damn thing on them.

Oh, and can we talk about that fun moment in time where you haven't exactly "popped" yet, but are definitely spilling out of your jeans everywhere — causing everyone around you to get awkward since they don't know how to treat you?

And how when it comes time for "birthing class," nobody ever really gives it to you straight.

Of course, pregnancy isn't all bad. Let's not forget the unexpected perks that come along with it...

Once her pregnancy was in the rearview, Shah quickly learned that she had a whole new phase of life to provide her with comedic material: parenthood. "I felt like pregnancy was the hardest thing I have ever done," she says. "But after my son was born, I realized that being a new mom is even harder! Life just keeps getting more confusing and more overwhelming." (Not to mention more hilarious.)

So went the inspiration behind Mommie Pickles, a fictional character she describes as "a sassy new mom" with a unique, relatable, and funny take on all things pregnancy and motherhood-related. Shah says that her hope is to give fellow moms and moms-to-be some much needed comedic relief during their otherwise hectic day. "Often only the glamorous aspects of pregnancy and new motherhood are shared," she says, adding that moms can be super hard on themselves through it all. "Every little and big thing you do will make you doubt yourself, because you want to give the best start to your child. In that struggle, we forget to laugh and have a sense of humor about things. Laughing doesn’t make it all easier, but having a sense of humor helps me think more rationally and serves as my reality check."

UPDATE: This post previously referred to Meghna Shah's Facebook page as Mommie Poppins. Since publication, the name of the page has changed. You can now find it at Mommie Pickles.