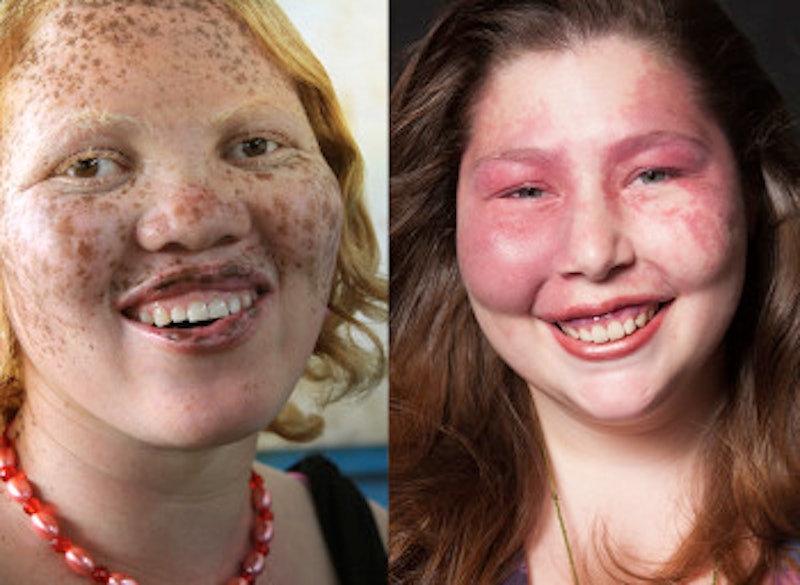 "Often, when I'm photographing someone with difference, someone will come and see the photographs and say,'You're really capturing their inner beauty," Rick Guidotti, the subject of the new documentary On Beauty , proclaims in one scene of the film. "And I'm like f*ck inner beauty, these kids are gorgeous."

On Beauty lets us look through the former fashion photographer's lens after he changes his artistic trajectory to document people with genetic conditions. It's a reminder that what we perceive as beautiful is framed by the images that surround us, and it asks a simple yet powerful question: What if we ignored those images and made our own?

After watching the film and having an interesting phone conversation with the film's director, Joanna Rudnick, I gained a clearer understanding of how On Beauty manages to compellingly present several perspectives in a short 30 minutes. Rudnick first saw Guidotti's work at a Genetic Alliance conference in 2009, where she was debuting her first film. In the Family was about confronting an unseen genetic condition, and seeing Guidotti's photos at the conference started her thinking about conditions that make people visibly different.

She followed Guidotti for five years documenting his work, particularly his photos of Sarah Kanney and Jayne Waithera. Kanney has Sturge-Weber syndrome, a condition that left an enormous port wine birthmark on most of her face. Waithera was born with albinism and subsequently abandoned by her mother, a common fate for East Africans with the condition. In fact, having albinism in that part of the world is not only othering, it's dangerous. Those with albinism risk being kidnapped or dismembered, as their body parts can fetch top dollar for use in ceremonies by witch doctors.

Their stories are compelling, but as Rudnick was filming them, she said she was also thinking deeply about her own difference. A breast cancer survivor, Rudnick underwent a bilateral mastectomy. Suddenly, On Beauty became a film about difference that includes the experiences of the director, subject, and the subject's subjects.

Jayne Waithera and Sarah Kanney, two subjects of the film On Beauty.

"While I was pregnant with my second child," Rudnick says during our phone call, "I was diagnosed with breast cancer and had a double mastectomy. I started asking questions like, 'What does it mean to be different, to feel different? What does it mean about the standards we live up to?' Like everybody else, I suffered from the same challenge of how to accept myself and think about myself."

That idea is exactly what's behind On Beauty. Guidotti was once a fashion photographer for clients like Elle, Harper's Bazaar, and Yves Saint Laurent. At a certain point, though, he became completely disenchanted with the fashion industry's narrow view of beauty. After a chance encounter with a woman with albinism, Guidotti decided to change direction and focus on photographing those who don't fit any of society's molds. His foundation is called Positive Exposure, and his work is at the center of On Beauty.

Rudnick says it's Guidotti's ability to see people clearly despite their differences that makes the film so poignant. “When I was with Rick at a genetic conference, an individual who had short stature walked in — he had a form of genetic dwarfism," Rudnick remembers. "And when this individual walked in, Rick didn’t miss a beat. He was like, ‘Hey, how ya doin?’ And I could absolutely see that there was no difference. There was none of that feeling of 'oh my god, I can't stare, that person is so different from me.' There was none of that fear. And that's how Rick sees people."

Watching the film, it's clear that Guidotti's positive attitude and energy went a long way to make people not only feel comfortable, but actually visible. Through his photographs, his subjects could leave behind the stigma of being another person with another condition, and reclaim their individuality.

The film is in limited theatrical release, and opened in New York City on July 31. After that, Rudnick hopes that it will find its way to a network. For her, the film is a short conversation starter, meant to spark ideas in people's heads about what it means to be different.

“Why do we stare? Because we’re so unused to seeing it. And, another thing is that we don’t feel like we have permission [to ask]," Rudnick says. “The message is really universal, and we want it to be a conversation: What can we personally do to make change? How can you treat people with love, and love yourself? This idea should be extended to anyone. Rick looks at people through that lens. And he wants to give the audience permission to look, too."