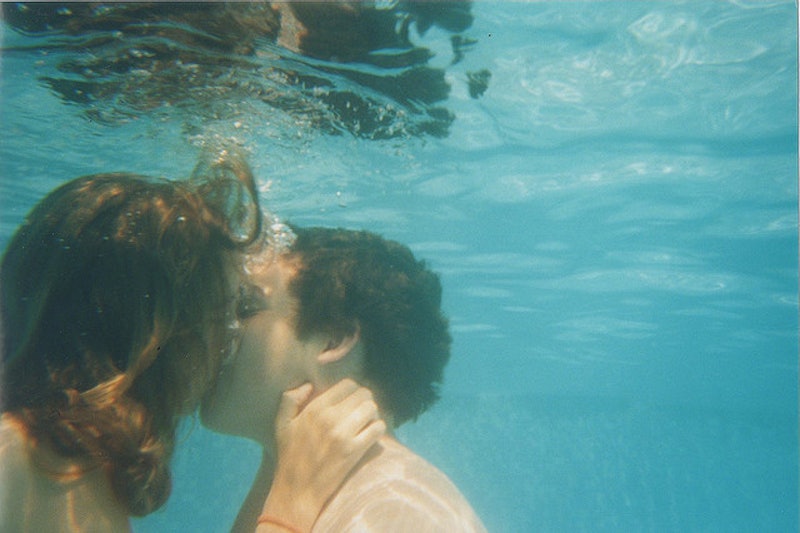 I don't think any sentient being out there who has seen (or, better yet, experienced) Notebook-caliber kisses could possibly argue that kissing is anything other than inherently romantic and sensual. Like, you're putting your tongue in someone's mouth; what could be more intimate and arousing? But according to a new anthropological study, half of the world doesn't think kissing is romantic. A majority of the world's 168 countries do not engage in "romantic-sexual kissing." Cue the gasps and jaw drops.

The researchers wanted to figure out if romantic kisses — which are frequently depicted in a wide range of literature, art, and media — are actually universal to all humans, regardless of location and culture. While there was evidence of romantic kissing in 77 countries, the remaining 91 (aka 54 percent) don't smooch in a sexy way.

Unsurprisingly, romantic kissing is common in most cultures in regions like North America, Europe, Asia, and the Middle East. But if you venture to Central and South America or sub-Saharan Africa, it's unlikely that you'll see anyone getting their makeout on. While the researchers did find a "significant" link between "elite" societies and romantic kissing, they also noted that "cultural repression" wasn't to blame for the lack of sexual kissing in certain parts of the world.

"We suspect that perhaps Western ethnocentrism — that is 'the belief that a behavior currently deemed pleasurable must be a human universal' — may be driving the common misconception that romantic–sexual kissing is a (near) universal."

Basically, the high volume of kissing we see in Western media (even as I wrote this, Soulja Boy's "Kiss Me Thru The Phone" came on shuffle) may cause us to wrongly assume that liking to smooch is something innate in all humans, when in fact, it's not at all.

Hey, to each their own. If you like to kiss, go for it. If not, don't. It's that simple. If you're curious, here are five more weird facts you might not have known about kissing.

1. Two-Thirds Of People Tilt Their Heads To The Right When They Kiss

Have you ever been totally thrown off when kissing a new partner because he or she went the "wrong way"? That's probably because most people, eerily enough, do it the same exact way. A German researcher observed 224 couples and concluded that this odd "head-motor bias" may even have roots in the womb, which is equal parts fascinating and terrifying.

Not in a row, unfortunately. The average amount of time a person spends locking lips is 20,160 minutes, which comes out to two full weeks of passionate tongue-wrestling. If it were up to me, it'd be more, but to each their own.

3. The Kissing World Record Was Set On Valentine's Day 2013

How adorable is that? The Guinness World Record holders, a couple from Thailand, smooched for 58 hours, 35 minutes, and 58 seconds. Translation: For more than two whole days, these two love birds did not stop kissing each other, presumably not even to eat, pee, drink water, or ... breathe?! Mad props.

4. The Average Woman Will Kiss 15 Men Before Finding "The One"

Oops, looks like I'm messing with the curve, because I'm pretty sure I've kissed, like, quadruple that number. The 2014 study, which was commissioned by eHarmony, also found that men will kiss one more person — 16 — on average before finding his ideal partner.

5. Kissing Is A Stress Reliever

A 2009 study found that, in both sexes, kissing releases chemicals that ease stress hormones. After swapping spit for 15 minutes, participants' cortisol levels dropped, which is an indication that their stress levels declined. The same study measured oxytocin levels — which affect feelings of bonding — but there was some gender disparity there. Men had higher levels of oxytocin levels after kissing, while women's levels were lower. So kissing might be more likely to make men feel a stronger bond with their partners, but the same apparently can't always be said for women.

More like this
The Best Time To Date After A Breakup, According To Experts
By Bustle Editors
Virgo & Sagittarius Zodiac Compatibility, According To Astrologers
By Kristine Fellizar
7 Women Share Their Best Orgasm Stories
By Lexi Inks
Expert Tips For Being On Top When You're Plus-Size
By Lexi Inks
Get Even More From Bustle — Sign Up For The Newsletter