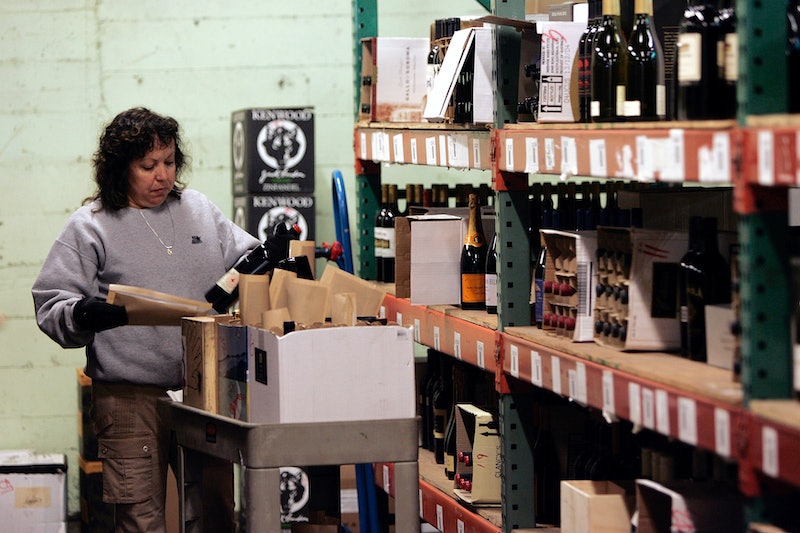 On my 21st birthday, a friend of mine gave me a card that showed a well-groomed woman in pearls and a silk dress smiling over her shoulder while coyly sipping a glass of wine. The caption, “Wine: How classy people get wasted”, has become a cliché.

But fermented grape juice hasn’t always been associated with sophistication, or with women, and our blasé attitude toward middle-class female wine drinkers might downplay a new demographic of alcohol-abusers—or so goes the argument in Gabrielle Glaser’s new book, Her Best-Kept Secret: Why Women Drink— And How They Can Regain Control (Simon & Schuster).

Glaser doesn’t need to convince me that vino isn’t always classy. The very first thing I remember getting wasted on was something called “wine product.” (I promise it was one of the less revolting drinks available at the local deli that didn’t card.) I’ve also drunk wine that comes in a cardboard box. With a straw.

But today, according to Glaser, wine is more than just another way to get buzzed: It’s “a respectable antidote to modern stress—especially for women.”

To many, wine appears safer and more sophisticated than spirits. But with wine’s average alcohol content creeping ever upwards, we may need to take another look at our habit. (I’ll confess I was surprised to learn that half a bottle of 14.5 percent ABV wine contains more than five units—meaning that splitting a bottle over a two-hour dinner constitutes a “binge”, according to the Centers for Disease Control and Prevention.)

Plenty of research has focused on binge drinking among adolescents and college students, but middle-aged women are Glaser’s primary concern. Wine may be difficult to resist for women struggling with midlife issues like losing their parents and balancing the needs of their children and their career.

“The drinking mom has become a cultural trope,” Glaser writes. “In Portland, Ore., where I lived for six years, I would watch most Sunday nights as a neighbor deposited two giant Merlot bottles in my recycling bin…. In New York's Westchester County, where I had lived previously, women would pass around a flask at dreary school functions. Alcohol and motherhood were intertwined, so much so that after I had my third daughter in the anxious autumn after 9/11, I received bottle after bottle of wine as baby gifts.”

But the woman wino, argues Glaser, is a relatively recent phenomenon.

In mid-twentieth century America, wine “was considered the drink of poor immigrants and Skid Row drunks…. Wine also felt off-limits to women. It was consumed mostly in restaurants, where waiters offered men the wine list, the first taste and the cork.”

Women’s rising representation among alcohol abusers can be partly attributed to increased gender parity. Rick Grucza, who studies alcohol abuse at Washington University School of Medicine in St. Louis, correlates women's drinking to their greater presence on college campuses, where they learn to binge-booze like the boys.

Targeted marketing campaigns have also helped turn women (specifically, mothers) into avid wine-swillers. MommyJuice Wines urges mothers: “Tuck your kids into bed, sit down and have a glass of MommyJuice because you deserve it!” Mommy’s Time Out also appeals to stressed out moms: “You Deserve a Break: Take a Mommy’s Time Out!”

Women don’t just drink different kinds of alcohol—our bodies also process the stuff differently. It may be even more important for women who abuse alcohol to seek help, because our physiology makes us more vulnerable than men to its dangerous side effects. Not only do we tend to have a smaller body mass, but we also have more fat, which retains alcohol, and less water, which dilutes it. So not only do we win at getting drunker faster (which comes as no surprise to anyone who’s attended a co-ed college), we also beat men when it comes to developing alcohol-related liver and brain damage.

We have a new kind of alcoholic on the block, and she doesn’t fit the stereotype. But that doesn’t make her problem any less real.