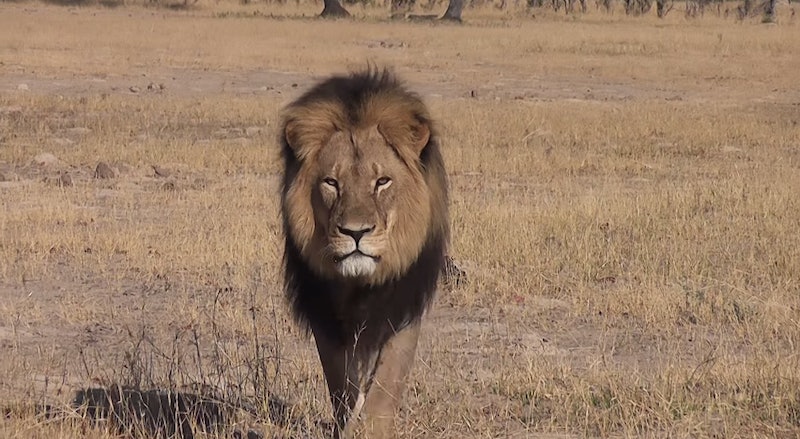 The world has become outraged at the death of Zimbabwe's Cecil the lion, who was killed by American dentist Walter Palmer during a hunting expedition earlier this month. In a statement, Palmer admitted to hunting the lion but maintained he believed the trip to be legal, blaming his guides for mishandling the hunt and its permits. Still, various Cecil the lion petitions have circulated online, asking for different forms of justice for the prized animal.

Palmer's current whereabouts are unknown, and he has yet to be officially charged by Zimbabwe or the United States. Two local guides, Honest Trymore Ndlovu and Theo Bronchorst, are set to appear in Zimbabwean court Wednesday and could face up to 15 years for allegedly luring the lion outside of Hwange National Park, located on the west side of the country. The 13-year-old lion was initially injured and hunted for 40 hours before being finished off with a rifle shot, authorities said. Cecil's body was found skinned and beheaded.

One petition on behalf of Cecil asks Zimbabwe President Robert Mugabe and the government to bring charges against Palmer and ask for his extradition to the African country. Another Cecil the lion petition targets Zimbabwe's issuance of hunting permits for endangered or threatened animals. As of late Tuesday evening, more than 230,000 people signed to ask Mugabe to stop the government from allowing these controversial permits.

According to the second petition's author Ruth McD, Cecil's legendary reputation began roughly three and a half years ago, when the lion lost control of his pride after younger males ran him out. But Cecil later teamed up with another lone male lion named Jericho to take control of two prides. The petition argues that with Cecil gone, Jericho will likely lose dominion over the two prides and the lives of the prides' cubs will be in danger since new males will only want their own offspring.

The story of Cecil's life and death could make a difference in how wildlife is toured and hunted in Africa. The Internet has proven powerful in enacting change, and these online efforts shouldn't be taken lightly.

More like this
What To Know About Martin Bashir After Watching 'The Crown'
By Bustle UK
Read Dan Levy's Heartbreaking Message After The Club Q Shooting
By Stephanie Topacio Long
Iran Has Issued A Death Sentence Over Mahsa Amini Protests
By Catharina Cheung, Darshita Goyal and Maxine Harrison
The 5 Best Brushes For Short-Hair Dogs
By Tiana Crump
Get Even More From Bustle — Sign Up For The Newsletter