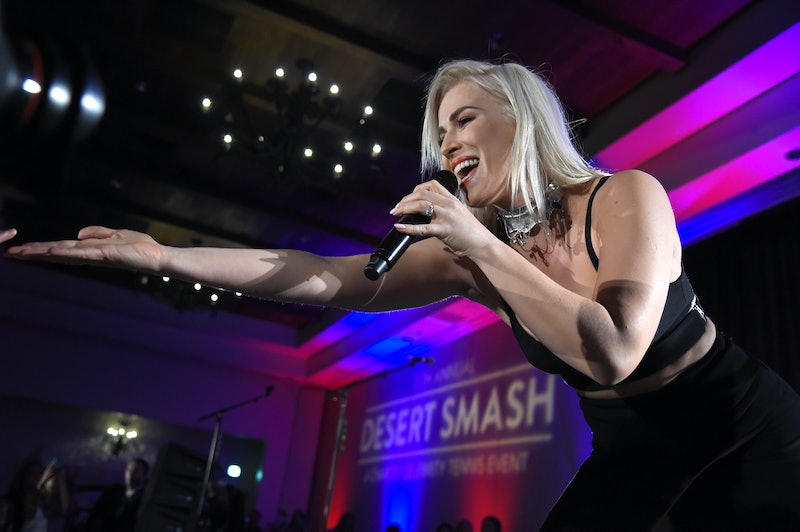 Back in the early 2000s, you couldn't go anywhere without hearing a song by Natasha Bedingfield. "Unwritten" became a huge hit, the theme song to the MTV reality series The Hills, and it was nominated for a Grammy. "Unwritten" is officially 10 years old, so what is Bedingfield up to these days? She's still singing and performing, as well as acting in guest appearances on TV shows. "Unwritten" and her 2008 hit "Pocketful of Sunshine" both remain iconic songs, which are enduring in pop culture with appearances in The Sisterhood of the Traveling Pants, Because I Said So, Easy A, and The DaVinci Code (seriously).

Recently, Bedingfield posted photos of her pink hair on Instagram and her fun times partying it up with Jennifer Lopez (yup, they're friends) for the pop star/actress' 46th birthday on the water in the Hamptons in New York. She's also attended Wimbledon, has a cute dog, and hanging out with folks like Timbaland and Derek Hough. I'd say Bedingfield is still having an awesome time without having a song dominating the airwaves, but that doesn't mean she's stopped recording. The "Unwritten" singer is still making music and announced an album called The Next Chapter in 2012, but has yet to be released.

Here's what else Bedingfield has been up to.

Bedingfield released the albums Pocketful of Sunshine in 2008 and Strip Me in 2012. She released songs on The Pirate Fairy soundtrack and a track named "Hope" for Philosophy Skin Care in 2015. She collaborated with the band A Simple Plan for a song called "Jet Lag" in 2011 and the band Lifehouse on a track named "Between the Raindrops." Bedingfield also wrote a song for Filipina singer Charice, composed a song named "Non mi ami" by Italian singer Giorgia.

Since 2007, Bedingfield has been an international ambassador for a charity called Global Angels, a children's foundation which was founded by her mother Molly. “I may be in a privileged position, but I am still aware that there are people around the world, particularly children, who live in conditions that would horrify us," she is quoted saying on her ambassador page. "They need our help."

In 2012, Bedingfield performed at the VH1 Divas concert special. Last year, she sang a song called "Love Song To The Earth" at the United Nations Equator Prize Gala.

Bedingfield made her debut as an actress in the James Bond video game From Russia With Love. She went onto make appearances in Degrassi: The Next Generation, The Naked Brothers Band's Christmas Special, Lipstick Jungle, True Jackson VP, and Web Therapy.

She also appeared as a guest judge on New Zealand's The X Factor with her brother Daniel (his big single was "Gotta Get Thru This"). In 2011, she appeared on Dick Clark's New Year's Rockin' Eve.