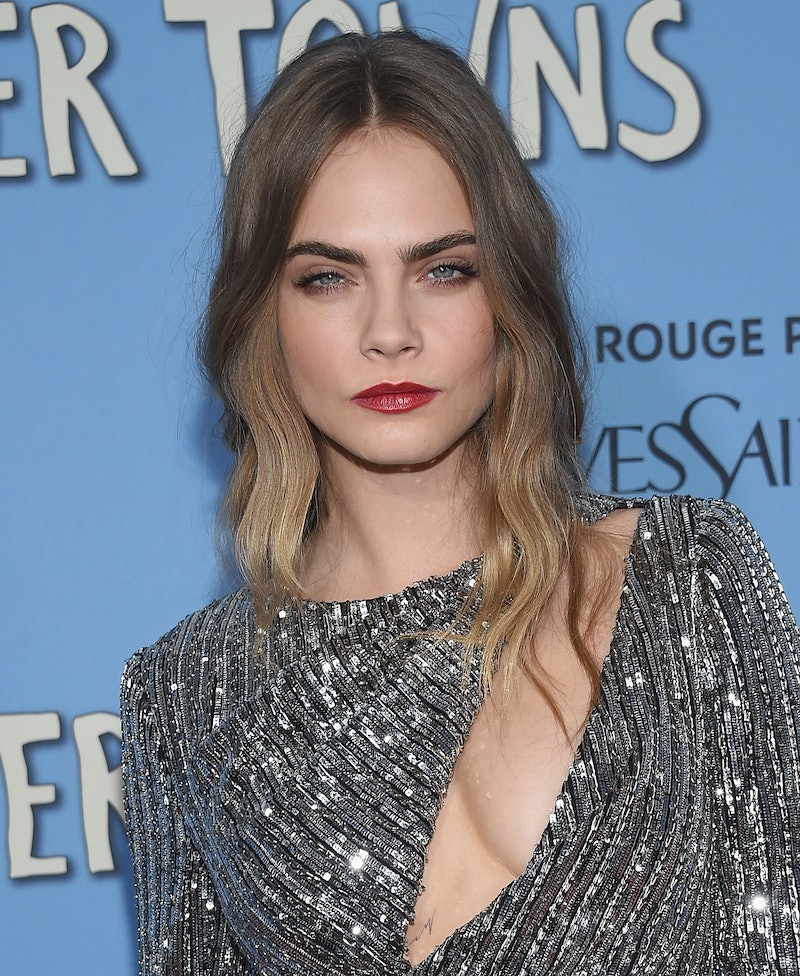 Cara Delevingne is rarely afraid to speak her mind. The actress and model has long been known for letting her personality show, just like her fantastic, famous eyebrows. And during a press tour for her big movie role in Paper Towns, the 22-year-old did not disappoint. Cara Delevingne shut down patronizing interview questions with her wit and sarcasm.

Delevingne's interview with Good Day Sacramento was off to a rocky start from the get-go. The anchors asked the model and actress, who participated via satellite, whether she had read the book the film is based on. Delevingne sarcastically responded, "Uh, no. I never read the book or the script, actually. I kind of winged it" before explaining that of course she read it and that she suggests John Green's book to anyone. The interview became increasingly cringe-worthy after that. One anchor pointed out that Delevingne seemed more excited about the movie in previous interviews and asked her if she was exhausted. Another anchor chimed in, saying, "You seem a bit irritated, perhaps it’s just us?" Delevingne, now irritated, said, "No, I think it's just you." When an anchor condescendingly told her to take a nap and have a Red Bull, she signed off on them completely.

Though the interview is painfully awkward to watch, it is nice to see a celebrity who does not play along with strange questions just for the sake of going along with what a morning television show expects from her. Not that this is surprising, coming from the bold star.

This is not the first time Delevingne has been fearless in letting her real thoughts shine through when being interviewed. Earlier this month, she gave an awesome response after Vogue appeared to be raising the the question of whether her bisexuality is just a phase. Delevingne said to the New York Times, "My sexuality is not a phase. I am who I am." She also said that she found "nothing malicious" about the article, but in any case it is great to see her be unafraid to clarify anything that people may have questions about.

While talking about another one of her films, the super-villain movie Suicide Squad, Delevingne served up some real talk about the superhero film industry, blasting many of the movies as "sexist." She told Empire magaizne, "Female superheroes are normally naked or in bikinis. No one would be able to fight like that. Wonder Woman, how the hell does she fight? She would be dead in a minute." Aside from being brave enough to say what she thinks about these movies as a whole, she definitely makes a point with that one. Bravo.

It is too bad that sometimes great interview opportunities unravel with the wrong type of questions, because Delevingne is someone who actually has a story to tell rather than giving the same old answers to the same old people. Fingers crossed that her next interview goes a lot better than this, so she can go back to serving up her wisdom!