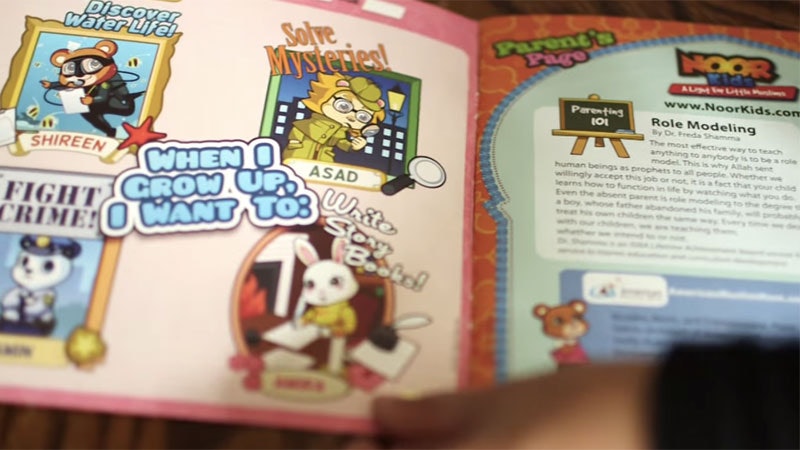 Growing up anywhere can be hard. But for brothers Amin and Mohammed Aaser, growing up as young Muslims in post-9/11 America was uniquely challenging. That's why the two have teamed up to create Noor Kids, a Muslim-themed children's book series that strives to help young Muslims build confidence in their religious and cultural identities. "Noor," translates to "the light," as in: lighting the way for young Muslims, through the struggles of growing up in the United States. I love this project so, so much.

The books, written with 3- to 8-year-olds in mind, feature four cartoon animals who are learning to deal with issues like bullying, spiritual identity, and having patience. The books aim to encourage critical thinking in children — the "why" behind beliefs and practices of Islam, as well as facilitating engagement between parents and their young readers, through the interactive activities offered in each book. The project began at Harvard Business School, where Mohammed Aaser won an entrepreneurship contest in 2011, which originally helped fund noorkids.com — now a subscription-based children's book service.

Growing up as the Muslim children of Pakistani parents living in Minnesota, it's not surprising the Aasers found a lack of children's literature that spoke to their own experiences. Then, when the brothers were teens, the 9/11 terrorist attacks occurred. According to an article published by MPR News, this is when understanding their Muslim identities became especially difficult:

Amin was just 13 when the planes struck the World Trade Center. A friend turned against him and started bullying him online. During Ramadan, he'd head to the library instead of the lunchroom so other kids wouldn't notice he was fasting. During Little League season, he begged his mom to wait to pick him up until the games were long over, so other kids wouldn't see her headscarf. Looking back, he realizes he was ashamed of his identity.

This shame is something the brothers hope their books will help today's American-Muslim children avoid.

But the Aaser brothers' books aren't just for children growing up Muslim either. According to their website, noorkids.com, the books' universal themes and valuable messages are great for any young person:

While Noor Kids is crafted specifically for little Muslims, the concepts addressed in our books are generally universal (i.e. gratitude, honesty, altruism, etc) which makes the books appropriate for just about anybody. Further, for those interested to learn about the faith of their Muslim neighbors, we’ve discovered that Noor Kids does an exceptional job of introducing Islam.

Noor Kids is going strong, with books being purchased by more than 25,000 households in 25 countries since the project's inception. "Kids must see themselves in the media that they consume, so that way they feel normal," says Amin Aaser, in a video, advertising the books. I definitely agree.