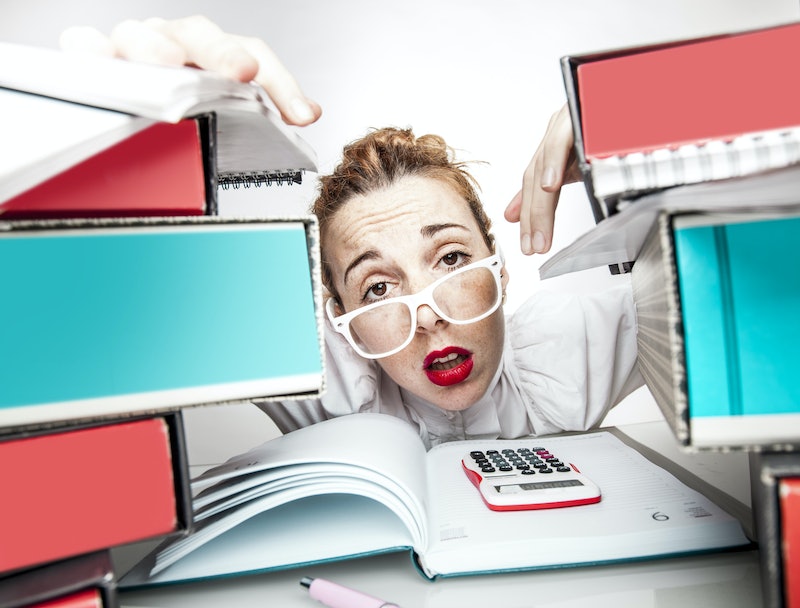 Don’t you just hate it when businesses try to accommodate women? I mean, really, trying to attract female employees? Gross. How dare you implement something like an office daycare center or crack down on sexual harassment in the workplace! It’s outrageous! Women don’t want to work, they just want babies.

At least that’s what writer Sabrina Schaeffer seems to think. In her Forbes piece entitled (I kid you not) “Businesses Must Stop Coddling Women in the Workplace,” she argues that companies shouldn’t be embarking on a “fool’s errand” to attract high-level female executives. She supports this assertion with the actual argument: “Bottom Line: women have children. They want to spend time with those children.” And therefore, trying to drag them kicking and screaming into the office is a bad idea. And I'm just like:

Even more bizarre, she claims that “Women today are not held back by a sense of male dominance. The false consciousness of decades past has fallen by the wayside.” It has? Wow, that's great! Especially since it’s such a well known fact it doesn’t even need to be supported by any evidence, not even anecdotal evidence. Unfortunately for Schaeffer, you can’t make something true just by saying it, any more than the GOP can end racism just by saying it’s over.

Throughout the piece, Schaeffer only cites one piece of data to truly back up her claim, unless you count her tangent about female graduation rates. She brings up a Pew Research Center study that found only 23% of married mothers would choose to work full time outside the home if given the choice. And clearly this means that women don’t like working. Because it’s inconceivable that some women don't have a choice and might need to work outside the home for financial reasons and should be rewarded for their work accordingly. Or that some women might not be married or be mothers. Or that more women might want to work if workplaces were different.

Overall, though, Schaeffer’s essay makes a mistaken assumption that all too many commentators fall into: that the current, male-centric workplace model is some sort of holy thing that shouldn’t be messed with. And why is that, exactly? Researchers estimate, after all, that a 30-hour work week may better for us than the standard 40. Americans work more hours and take fewer vacations than citizens of any other industrialized nation, and yet somehow we’ve all decided that this break-neck, unbalanced system is what is best for us as people.

So what exactly would change if we built more flexibility into the system? What would happen if employees got more vacation days or worked fewer hours? Would the sky come crumbling down? If we built a workplace environment that was suited to both halves of the population, would we be inviting chaos and anarchy or would we be growing as a society and an economy in ways that benefit everyone?

Because no matter how hard skeptics like Schaeffer try to fight it, women belong in the workplace. And our workplaces should reflect that.

More like this
An Open Letter To The Person Who Bought Steve Jobs’ Birkenstocks For $218,000
By Ginny Hogan
8 Money Saving Experts To Follow For Accessible Advice
By Maxine Harrison
Here’s Your Daily Horoscope For December 6, 2022
By Mecca Woods
TikTok Is Obsessed With Dolly Parton’s Houseware Line
By Alexis Morillo
Get Even More From Bustle — Sign Up For The Newsletter