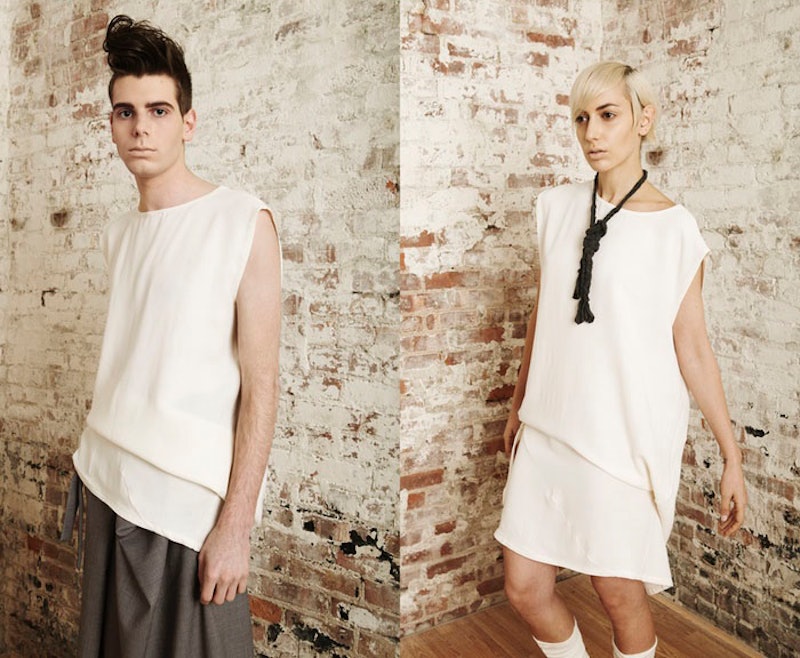 One thing that I find increasingly frustrating as a designer is that I am often forced to tick a menswear or womenswear box when advertising my products. Lamentably, there seem to be few options to identify as a designer of gender neutral clothing and accessories, but that doesn't mean those designers don't exist.

I've never personally designed anything with the intention of catering only to those who self-identify within a set gender binary. But as a handmade designer who still sells on Etsy, I've noticed there's no option for posting a skirt or dress or even a body chain that isn't gendered. Checking that box makes me feel as though I am imposing limits on my designs and those who want to wear them, which I definitely don't support. These limits are unfortunately still all too common in the fashion industry as a whole.

While the New York Times described NYFW as "the great gender blur" in Feb. 2015, gender neutral and gender non-conformist clothing options are not just a runway fashion trend. These options are necessary. So I wanted to celebrate a few of the brands that don't conform to the binary and that are unafraid of flying outside conventional fashion industry norms.

If the design aesthetic of the brand Not Equal looks familiar, it's because these genderless designs are the work of Project Runway and Project Runway All-Stars alum, Fabio Costa. While the judges on Project Runway may not have always agreed with his gender-bending choices, I am totally here for this line. All the items are handcrafted with expert construction, and they also defy size restrictions because each is made to order based on an individual's measurements.

Deemed the first "alternity" wear brand, Butchbaby & Co has already been featured in Elle, New York Magazine , Mic.com, and right here on Bustle back in Dec. 2014. Although the brand's first collection of alternative maternity wear isn't due out until this fall, people seem rightfully excited about this new line of gender neutral apparel designed specifically for pregnant masculine, transgender, and queer individuals.

69 is one of those brands that is filled with mystery in the best possible way as the designer behind it remains anonymous. The brand told Racked that this choice is intentional in order to remain a genderless, non-demographic brand. This line of denim wonders is manufactured right in Los Angeles and has been worn by Rihanna (one of my favorite gender non-conforming celebs) and Kylie Jenner.

Locally made in Toronto, Canada, Muttonhead is a brand that has been making gender neutral clothing since 2009. This line stands out not only because it is gender and age neutral, but because it's also created specifically as "slow design" that transcends trends unlike the trend-heavy alternative, fast fashion of the world. This past spring, it introduced mini versions of its best-selling comfy sweats with its gender neutral kids line, Lil' Mutts.

I was immediately struck by the beauty of the model wearing the garments of gender neutral clothing brand TILLYandWILLIAM. Not only are these pieces gender neutral, but the color palette is mostly nude and black, which adds to the minimalist aesthetic. The design duo of Jessica Lapidos (Tilly) and Tom Barranca (William) says that they also aim to blur the lines between formal and casual.

Flavnt Streetwear describes itself as a brand for men, women, and everybody in between. The gender neutral tees are designed to promote self love and being comfortable, confident, and proud of who you are. The streetwear label is not only size inclusive but also heavily entrenched in the LGBTQ community. As a way of giving back, it partners with non-binary individuals and donates 15 percent of sales to help finance gender confirming surgeries.

The clothing line Gender Flux was started as a campaign to bring awareness to the gender non-conforming community. The success of the original round of pre-order tees created by gender fluid fashion blogger Elliott Alexzander and sold through Kickstarter allowed the brand to launch five new designs this past January. It is currently hosting a back to school sale through Aug. 15 and all the products are 50 percent off to help fund the launch of its full merchandise and apparel brand in Jan. 2016.

Although I have my doubts that fashion will ever be genderless, it's brands such as these that make the idea seem just a little more tangible.