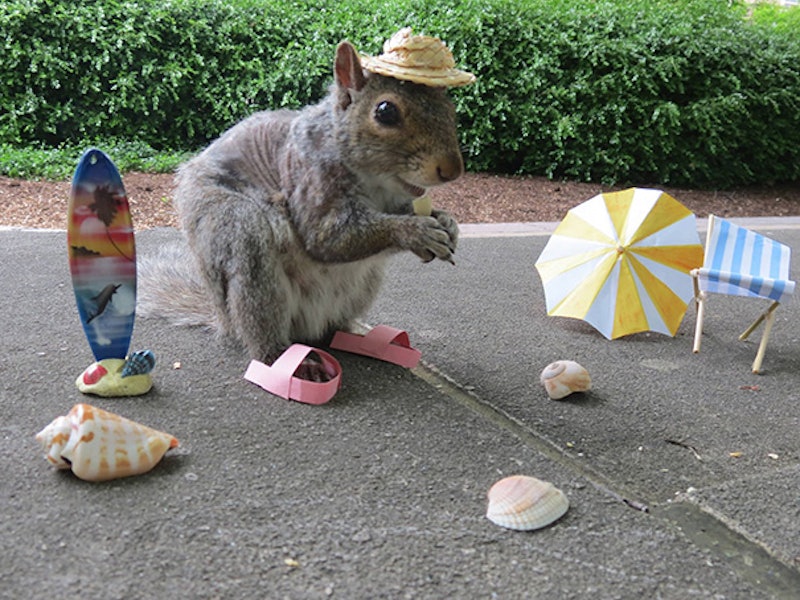 You know what, internet? This university student who dresses squirrels in costumes cannot have hit the internet fast enough. Bless Penn State University senior Mary Krupa and her photo series Sneezy The Penn State Squirrel, because I'm sick of folks throwing serious shade at these creatures. All this nonsense of relating them to "rats with fancy tails" and such. I gotta tell y'all a story. My friend, Julia, came to visit me in New York once from France. It was her first time in the country and as I wheeled her around Brooklyn, she stopped dead in her tracks in McGolrick Park. "Holy sh*t!" she said, pointing at two squirrels chasing each other up a tree. She'd never seen North American squirrels before. Imagine how she'd react to this adorable lil bubs!

Krupa has earned herself the campus-wide nickname "the squirrel whisperer" thanks to her mastery of chasing down, befriending, costuming, and photographing squirrels. She says the squirrels' approachability and friendliness inspired her to move forward in creative pursuits with them. Although I like to consider Julia and Krupa's points of view, I still find bold squirrels — ones unafraid of humans — majorly unsettling. On my college campus, a squirrel introduced itself to me my very first day...by literally leaping onto my shoulder and side-eyeing my sandwich. See? Upsetting. Perhaps I would have been less afraid if he were wearing a jaunty sombrero.

Krupa posts the collection of four squirrels she adorns and captures via phone camera on her Facebook page. Catch Sneezy in some classic positions below:

Such vision. Such...fluffy tail. Should the squirrel be holding scissors?

Sneezy is an obvious party pro and I refuse to hear otherwise.

You can tell Sneezy is concentrated by the closed eyes.

Can we all agree all Sneezy looks are great looks? Because it's the hard truth. Thank you, Sneezy.