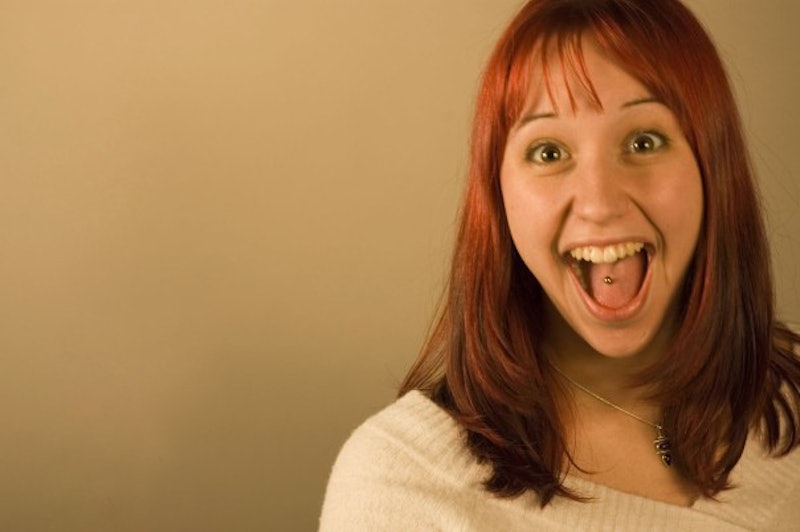 As a young woman in art school — at the exploratory age of 20 — there were two things I wanted above all else: To have a kitten and to get a tongue piercing. I wanted a kitten because I had been forced to leave my beloved indoor/outdoor cat behind in the process of leaving the state for school (and because kittens are, obviously, the best). The tongue piercing, however, I wanted because I found them to be wholly intriguing. In my mind, making the choice to pierce my tongue was a way for me to exercise my unalienable rights in regard to my body and to dive into the realm of body modifications (which represent absolute individualism in my opinion). So knowing my heart's utmost desires, my dear, sweet roommate opted to get me a tongue piercing as a gift.

Overjoyed and filled with youthful enthusiasm, my roommates and I called a reputable tattoo and piercing parlor, made an appointment, and piled into a car. The trip was short, the piercing was smooth, and despite a rather large wave of initial anxiety while I sat waiting for the piercer to grab my tongue in the little sterile pincer, everything went according to plan.

As time went on, I learned to love my tongue piercing. It became a genuine extension of my personality and despite the fact that many conservative family members didn't understand it, I knew that the choice was right for me at the time. The tongue ring signified to me a certain level of strength and perseverance. It's not an extremely difficult piercing to get or maintain, but it does take quite a bit of courage to stare a needle down as it goes through an organ you use actively every day.

Beyond the courage aspect, tongue rings come with a variety of perks. Here are just some of reasons I so loved my own, as well as why I eventually wouldn't.

First and foremost, your tongue is an amazing organ. Each day, it's bombarded by a myriad of helpful and harmful bacteria. It enables you to chew effectively, swallow properly, and even blow bubbles in your bubble gum. Of course, it's responsible for your ability to speak and it has an uncanny ability to heal quickly.

Sure, for the first few days tongue piercings are awkward. You definitely won't want to schedule your piercing right before a major presentation or speaking engagement. But within about a month, your piercing should be more or less healed. That is, of course, if you've practiced good oral hygiene and followed the specific directions for aftercare that your piercer provided you with.

2. And They Are Discreet

Unlike many other facial piercings, tongue rings are fairly difficult to detect by the common observer. Unless you're in the habit of sticking your tongue out regularly (which, let's be honest, does happen a bit more once you've gotten it pierced), your coworkers, more conservative and distant family members, and even some friends may not even realize you've gotten one.

3. The Expressive Jewelry Is A Must

Speaking of sticking out your tongue, just as the act of doing so can be all sorts of sassy and attitude filled, so too can tongue rings. As far as jewelry selection goes, barbells for your tongue piercing are some of the most colorful and eclectic choices. They come in a wide range of witty, obscene, and even pleasure-inducing combinations. As contrived as it may be, I absolutely adored my little "f-you" barbell. It made me smile whenever I was able to sneak it out at someone, with or without them noticing.

In fact, I think the variety of tongue jewelry I collected may have been my favorite aspect of the piercing. Each day I chose a different color, pattern, and style — always befitting of my mood — and it became an enjoyable way of gauging my mindset as I started the day.

As much as I don't want to give too much reason to reinforce any sexual connotations regarding tongue piercings (although really, there shouldn't be negative connotations around people who enjoy giving and receiving pleasure in their private sex lives), I'll admit there were upsides. Everyone's experience with having a piercing is subjective, of course, but having the tongue piercing elevated my playful, exploratory attitude. And you know what? I'm grateful.

Yep, we had a good run, my tongue piercing and I. But eventually things came to an end. While I initially intended to keep the piercing well into the unforeseeable future, it became clear that it was time to say goodbye after about two years. (Which, I might add, is yet another upside to tongue piercings. In most cases, they close remarkably well.) When the downsides of having a tongue piercing became more prevalent, I had to come to terms with the fact that for me, having a tongue piercing was not just a phase, but a limited endeavor. In the end, these were the reasons I chose to retire my tongue adornments.

What was first an exciting new extension of my tongue eventually felt kind of cumbersome. Sure, I could maneuver the barbel with ease by then, but for me it became more of a distraction than an enhancement. I longed for the feeling of being able to kiss my beloved without having something else to contend with. I wanted simplicity back.

This will not come as a surprise to the many dentists who speak out against tongue piercings. Despite wearing both metal jewelry and some very flexible, bioplast barbells, the gums behind my lower teeth hurt occasionally and I noticed aching at the top of my mouth. I suspected that I was rubbing the tongue piercing about my mouth while I slept, and although the complications were minimal I didn't want any long term or expensive damage to occur.

While most people seem unaware of the change, I was acutely bothered by the fact that the longer I had the tongue piercing in, the more slurred my speech felt. After speaking with friends and family, I had confirmation that this was mostly an internal sensation and it may not be something every individual with a tongue piercing experiences. But I became tired, feeling as though I had to overly enunciate in order to achieve the level of clear speech to which I had previously been accustomed. Personally, I struggle with speaking quietly anyway and the tongue piercing was only contributing to that trait.

Along the same lines, the mobility I had while the barbell was in place began to feel limited. For the majority of my life, I had been accustomed to a fairly high level of tongue dexterity and it frightened me a bit when I noticed it lagging. Again, I didn't want to incur any long term negative effects, so I opted to remove the barbell once and for all, curious as to how quickly it would heal full shut.

Within a few months, there was little evidence of what had been before. My tongue to this day has a tiny indent where the barbell used to rest, but in its place I have the full tongue dexterity and confidence that I had prior to my piercing. I certainly have no regrets, and although some days I fell like a wuss for taking my piercing out within just a few years, I know it was the right choice for me.

Body modifications can be a wonderful form of self expression and furthering a unique aesthetic. Ultimately, though, listening to your instincts and your body is more important than pushing the envelope or adhering to a mod that is harming you or no longer suits you personally. Besides, now I have a nostril piercing to dote upon.

More like this
2023 Piercing Trends That Will Upgrade Your Body Art Game
By Carolyn Steber
Plus-Size Vintage You Can Buy Online Or In Store
By Dominique Norman
Melissa Barrera On Anxiety, Aloe Vera & Finding Self-Love
By Brittany Leitner
3 Afro-Indigenous TikTokers Share Their Most Meaningful Beauty Rituals
By Jada Jackson
Get Even More From Bustle — Sign Up For The Newsletter