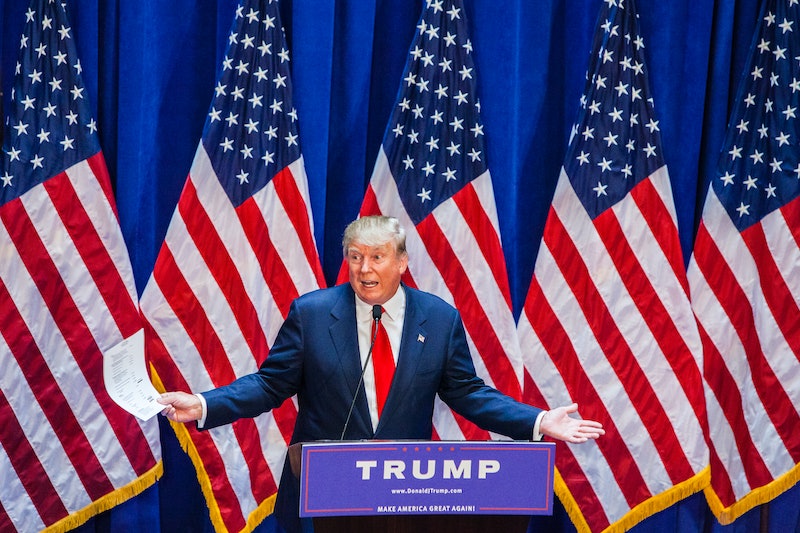 GOP presidential candidate and unlikely frontrunner Donald Trump gave significant campaign donations to Democrats until about five years ago. According to a Center for Responsive Politics analysis of Trump's campaign finance data from 1989 forward, he spread his money pretty evenly between Republicans and Democrats for years; it was only at the start of the 2010 campaign cycle that Trump made a huge rightward pivot, giving the bulk of his donations to GOP candidates and political committees. As Trump continues to enjoy early popularity among Republican primary voters — most of the national polls have him beating out the second-place contender, former Florida Gov. Jeb Bush, quite handily — he will likely face scrutiny for his years of financially supporting Democrats.

According to an NPR analysis, Trump has given around $1.4 million to political candidates, campaign committees, and the national parties since 1989. For the first decade of his donor activities, those contributions were split rather evenly between Republicans and Democrats with the Dems coming out a bit ahead. (Only 1989 and 1998 stand out as exceptions in which he donated the majority of his funds to Republicans.)

In fact, over the past few decades, Trump has given cash $$$ to a number of lambasted liberals, including Senate Minority Leader Harry Reid (D-Nev.), New York Gov. Andrew Cuomo (D), Sen. Chuck Schumer (D-N.Y.) and Secretary of State John Kerry.

But during the 2010 campaign cycle, something changed — drastically. For the past five years, Trump has funneled money almost exclusively into GOP coffers; NPR’s analysis puts the figure at 97 percent. And the amount of money that he is willing to give has leapt as well. More than 40 percent of his total contributions since 1989 have come since 2010.

His embrace of GOP candidates and the Republican Party at large could be traced to a profound change of heart on his political commitments, reasons NPR's Danielle Kurtzleben. But Trump’s policy attachments have been notably difficult to discern. In the aughts, he supported the health care exchanges introduced by the Affordable Care Act. But in the past couple of years, Trump has proven a fierce critic of Obamacare.

On tax policy, he once proposed a one-time wealth tax on millionaires to help decrease the national debt. While Trump hasn’t said whether he still stands behind such an idea, the tax proposals that he put forth in his 2011 book advocate for a flat tax or a simplified tax code that puts the highest income bracket under only a 15 percent rate — either reform would mean almost egregiously large tax cuts for the wealthy.

Instead of seeing Trump's shifting donation patterns as a map of his policy choices, Kurtzleben writes, perhaps we should instead ask whether he wanted to build up political capital and strengthen relationships with GOP politicians, particularly given that he donated to 34 separate Republicans in 2014 alone.

Trump, however, had another take on his political contributions. When speaking to the millionaire businessman, conservative radio talk show host Howie Carr asked about the money he has spent on Democrats over the years. Trump told him the dollars only represented wise business investments:

It's smart. It’s called being an intelligent person and a great businessperson.

Of course, these remarks about his involvement with Democrats being "good business" are also coming from a man who resigned from the Republican Party in 1999 because, as he put it, "the Republicans are just too crazy right."

For the moment, Trump is making a solid showing in the GOP presidential field by continuing to unleash a whirlwind of controversial statements that tie together key conservative flashpoints, from illegal immigration to veterans' rights to Islamic extremism. (Remember that time the Donald blamed the presence of ebola in New York on Obama and called for him to resign?)

"What he does is he takes page six tabloid tactics to presidential politics and not only do his opponents not know what to do with him; neither does the media," GOP strategist Ford O'Connell told NPR.

But some campaign analysts reckon that as voters settle in and begin to parse his record more closely, his lack of a consistent policy platform — and his past support for Democratic candidates and proposals like a wealth tax — may prove stumbling blocks for many.

As Politico's Timothy Noah notes, Trump has only been consistent in his inconstancy to policy commitments and political parties, a trait that has not served past presidential contenders well. After all, current Secretary of State John Kerry found that the Republican attempts to paint him as a "flip flopper" on crucial issues were largely successful in disrupting his public image and lost him support among Democratic voters and independents alike.