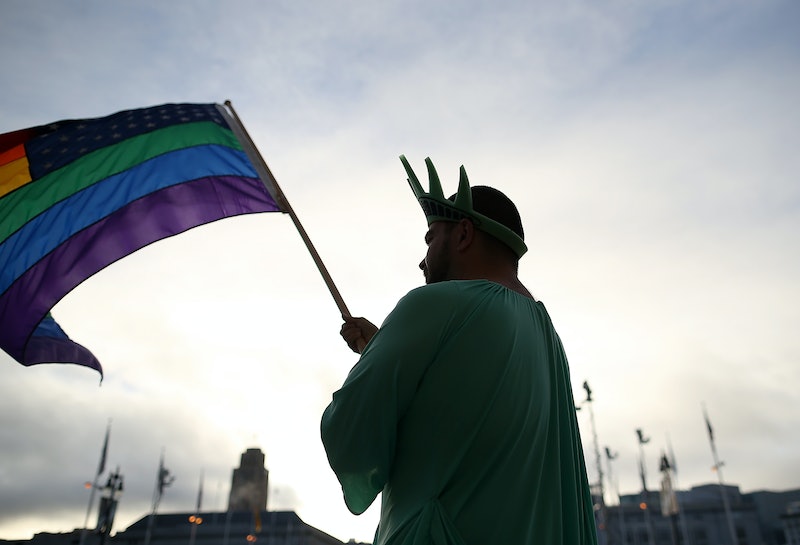 The Supreme Court's decision Wednesday to repeal the Defense of Marriage Act (DOMA) settles a major undecided issue in the immigration reform debate: whether or not to include protections for same-sex couples.

Now that DOMA has been overturned, gay individuals can sponsor foreign-born spouses for green cards. It's big deal, and a federal marriage benefit that DOMA previously blocked legally-married gay couples from exercising.

In response to the ruling, Homeland Security Secretary Janet Napolitano promised that "working with our federal partners, including the Department of Justice, [Homeland Security] will implement today's decision so that all married couples will be treated equally and fairly in the administration of our immigration laws."

Bustle spoke with Michelle Gonzalez, a 2013 Fellow at Immigration Equality, about what the end of DOMA means for immigration reform—and about the important advocacy work that's still ahead.

What were the challenges same-sex couples with a foreign-born partner faced because of DOMA?

There are two challenges that same-sex binational couples faced before DOMA was struck down.

First off, a heterosexual couple can normally petition for a green card for a foreign-born spouse. That’s one benefit that same-sex couples were denied by the existence DOMA. This means [foreign-born partners] needed to find other ways of staying here, including temporary visas that they would then need to constantly re-petition for. This meant the couple could be apart many months of the year, back and forth. You can imagine that they couldn’t really have a stable life together, whereas they would have been able to if they were a heterosexual couple.

The second challenge that same-sex couples faced under DOMA is that they were denied a remedy from deportation by applying for a green card through their U.S. citizen spouse. Let’s say I’m married to Sally, and I’m foreign-born, so I’m here on a visa. For whatever reason, I overstay my visa. If I were married to Sam, Sam could simply choose to petition for me for a green card and that would pretty much resolve the proceeding, and absent some other reason, I wouldn’t be deported. But same-sex couples didn’t have this defense. They didn’t have this option. That foreign-born spouse could be deported, completely tearing their family apart—and it has, many times. Many, many families have been torn apart by the legislation of DOMA.

What does DOMA’s demise mean for immigration reform and same-sex couples?

It means a couple things. The immediate benefit that same-sex couples are going to get depends on where they were married, and if their state recognizes those marriages. Let’s say I get married in New York, I solemnize the marriage in New York (meaning I have the ceremony here), and we live here. For federal purposes, I am now going to be able to petition for my green card, or if I am in deportation proceedings, I am going to have that form of relief discussed earlier.

This morning, my colleague Clement Lee was at 26 Federal Plaza (where immigration cases are heard in New York City) when literally in the middle of a case, [his] co-counsel requested to close this case. And the judge impatiently asked, “Care to explain why counselor?” She replied, “Gladly, as 50 minutes ago, my client is eligible, and will be applying for a green card through his same-sex spouse.”

This is a huge deal. This is a real-time benefit for married binational same-sex couples who were married in New York and residing here.

The tougher issue is going to be for people who have more complicated lives than that. Let’s say you get married in New York, and you have your ceremony in Maryland, and then you move with your wife or your husband to Virginia and you've live there for two years. How will the federal government decide to recognize your marriage—are they going to recognize it based on your place of residence? Are they going to look to see the state you got your license? All of these things are going to affect whether or not they’re going to confer federal benefits on you, including immigration benefits. So, that’s going to be something that immigrant advocates are going to have to work on.

What will advocates be doing to try to obtain those rights?

People in individual states are obviously going to have to push for a change; they’re going to have to push for same-sex marriages to be recognized. Advocates are going to say, don’t look to the state where [a same-sex couple] resides. If that state denies them that right and they go and get married elsewhere, you should still recognize that. I think it’s likely the federal government is going to be looking at the place of solemnization. Really, what they’re going to be saying is that you should broadly apply [the SCOTUS ruling], so that people who are legally married can apply for a green card for their spouse.

What are other immigration-related issues that are still left after DOMA’s end?

One big issue is that when it comes to detention facilities, LGBT people are over-represented. LGBT people of color are more often policed and placed into these detention centers. Also, there is a higher percentage of LGBT people seeking asylum, because they come from countries where being homosexual might be illegal. In seven countries, you can get the death penalty, for example.

Right now, there is not a good policy, and definitely not anything in terms of enforceable law, regarding how LGBT people are housed in detention centers. So, transgender people are more often than not housed based on their genitalia. They’re housed with a population that is not right for them at all, and they’re put into serious danger. This is something that would be up for discussion if we could get it in a provision in the conversation for comprehensive immigration reform (CIR), but we’re denied that access to the CIR bill.