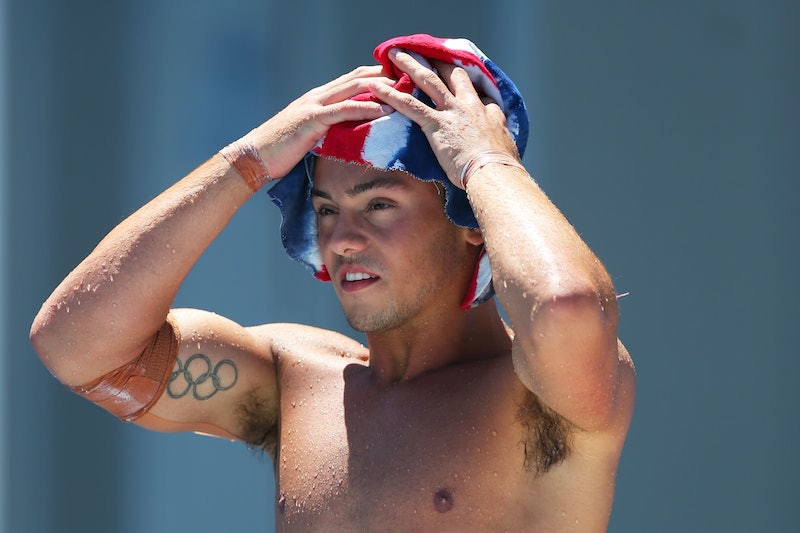 The cat's out of the bag: Olympic medalist Tom Daley likes girls and boys. In a touching five and a half minute YouTube video, Daley shares with fans something he's been keeping a secret since spring: He's dating a dude. And shortly after the video hit the interwebs, The Sun reported that Daley's mystery man is none other than screenplay writer Dustin Lance Black. And it appears the reports are true. So let's get to know the new couple, shall we? Here's six things you should know about Tom Daley's beau.

1. He's more than 20 years older than the Olympic medalist

The 19-year-old athlete sure picked an experienced man for his first boyfriend. Dustin Lance Black is 39-years-old, a whopping two decades older than his fish-out-of-water counterpart.

Daley may have nabbed a medal at the 2012 Olympics, but his screenwriting boyfriend won an Academy Award for Best Original Screenplay for his gay activism film, Milk.

3. He may have written Daley's coming out speech

"Come spring this year, my life changed massively when I met someone. And it made me feel so happy, so safe and everything just feels great. And, well, that someone is a guy," Daley said on a self-made video he posted to YouTube earlier this week. The video has been viewed more than seven million times.

4. He grew up in a Mormon household and faced doubts about his sexuality

"I had my first crushes on a boy neighbor when I was like six, seven. I knew what was going on, I knew I liked him, but what Texas did and what the culture of growing up Mormon, growing up military [reinforced], was, the very second thought I had, 'I really like that boy, and it's not just as a friend,' the very second thought was, 'I'm sick, I'm wrong, I'm going to hell. And if I ever admit it, I'll be hurt, and I'll be brought down,'" he told The Bay Area Reporter.

5. He was a writer on Big Love

Black was the only writer for the show who was raised in a Mormon household.

6. He's a founding board member for the American Foundation for Equal Rights

Founded in 2009, the foundation to support the plaintiffs in Hollingsworth v. Perry, a lawsuit challenging California's Prop 8.

More like this
UK Viewers Will Have To Wait To Watch The Handmaid’s Tale S5
By Maxine Harrison
15 Offensive AF Jokes In 'Friends' That Really Aren't OK
By Tolly Wright, Bustle Editors and Meguire Hennes
After The Bling Ring, Nick Prugo Was Embroiled In Another Scandal
By Arya Roshanian
Zac Efron Set The Record Straight On *Those* Plastic Surgery Rumours
By Sophie McEvoy
Get Even More From Bustle — Sign Up For The Newsletter