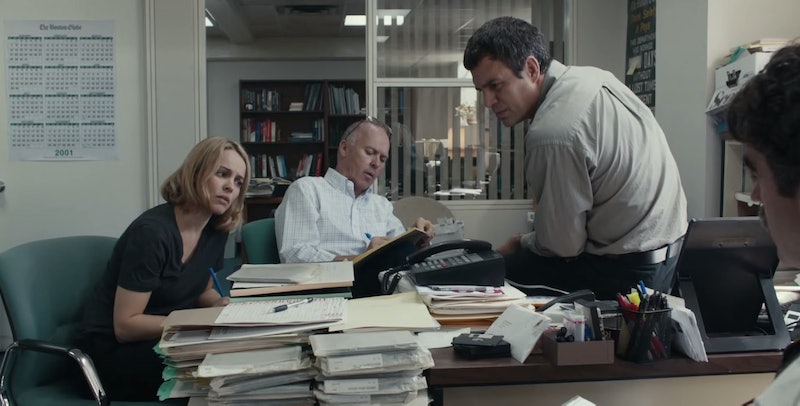 It's been awhile since we got a good movie about the process and importance of journalism. The trailer for Spotlight was released Wednesday, and it looks like our generation's answer to the last great journalism movie, 1976's All the President's Men. If you're not familiar with the classic, it was a thrilling drama about arguably the most important story of the 20th century — Bob Woodward and Carl Bernstein's exposé on President Nixon's spying in Watergate. Robert Redford and Dustin Hoffman starred as Woodward and Bernstein, and embodied journalists with a thirst for truth and justice.

Spotlight looks like it can be the new All The President's Men. A good-looking cast of reporters, including Rachel McAdams, Mark Ruffalo, and Michael Keaton, challenge the people in power— but rather than the president, it's the Catholic church. The film follows a team of journalists from the Boston Globe who investigate allegations of child abuse in the Catholic church. (The real Boston Globe cover story this film details rocked the world in 2002, and won the Pulitzer Prize for journalism.) These journalists were not just on the job, but on a moral mission to make sure those in power were held accountable for any wrongdoing.

Here's why this looks like the ultimate journalism movie:

When We See The Boston Globe In All Its Glory

A dramatic establishing shot. This is where the magic happens.

When We Meet The "Spotlight" Team

Regina George. The Hulk. Broadway's Brian Darcy James. This is the dream team.

When We Learn That It's True

When We See The Team Researching

The movie seems to emphasize how much work goes into cracking a story, which is refreshing.

When We See The Team In Their Natural Habitat

Hard at work in the Globe office.

When Rachel McAdams Is On The Job, Looking Surprised

I told you it gets intense.

Batman/Birdman tells Billy Crudup's lawyer character that they are going to print their story, whether he likes it or not.

When The Papers Are Printing

It's fun to watch the GIF on an infinite loop — it's so much more dramatic than someone pressing "publish" online.

When We See The Front Page Story

The stacked cast and important true story definitely makes this a movie to see in theaters — and maybe even on our Oscar ballots.