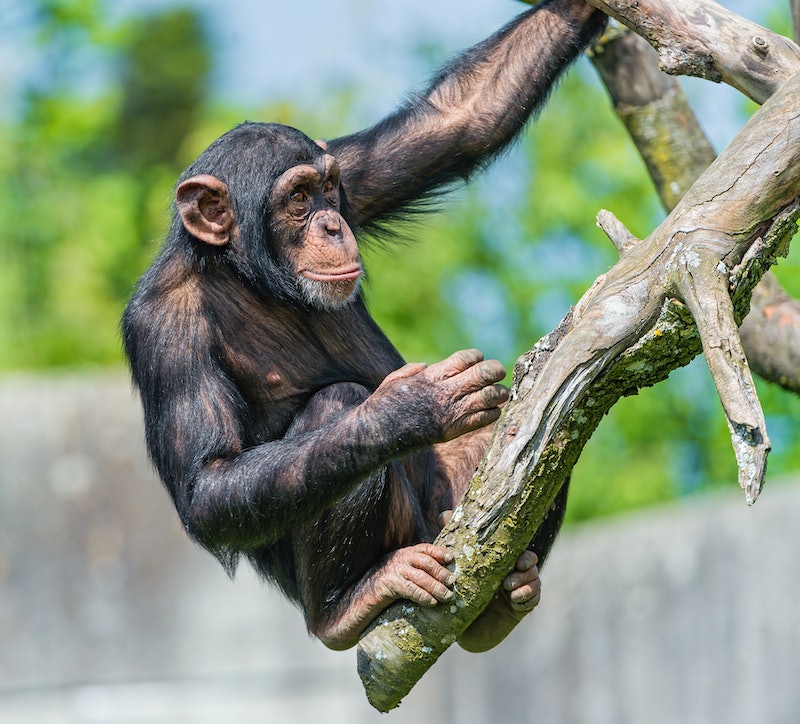 Animal rights activists seem to have found a new tactic: sue to have chimpanzees granted legal “personhood” status. In an unprecedented series of lawsuits taking place in New York state, a group called the Nonhuman Rights Project is claiming that the four chimpanzees being kept in facilities throughout the state are, in fact, unlawfully detained prisoners.

The chimpanzees, the group argues, are “cognitively complex, autonomous beings” who “have the basic legal right to not be imprisoned.” As such, they are filing writs of habeas corpus on the chimps' behalf, a legal measure which basically requires the government to produce its justification for detaining a prisoner. In other words, their argument is that chimpanzees cannot be held captive because they are, in fact, people.

Now, I am a big animal rights supporter, but this whole thing is going a bit far, in my opinion. And not just because I can picture the anti-abortion campaign that would follow: Chimpanzees are people, but not human babies! Just look at leftist priorities! No, the bigger issue here is that chimpanzees, though they are intelligent, emotionally complex creatures with their own personalities who very much do deserve to be treated well, they aren’t people. Nor should they have to be to deserve protection.

Let’s think about this. On the very slim chance that this writ of habeas corpus is granted, what are the implications of that? If chimpanzees can be wrongfully imprisoned, can they be rightfully imprisoned for committing crimes? If chimps are people, can they also be citizens? If not, are they illegal aliens? If they are citizens, can they vote? Do they pay taxes? Are they a protected class against which employers cannot discriminate? Are they eligible for Obamacare? Do they have the right to own firearms?

To be declared a person involves more than having a personality. It involves more than having complex emotions. Now, to be perfectly clear, I do think chimpanzees deserve more protection than they currently have. I would even go so far as to say that they have certain rights: the right to high-quality living conditions, the right to social interactions, the right not to be subjected to painful experiments, and so on. The right to be let out of their cages and run around willy-nilly probably shouldn't be on there, but still, if we want to stop removing them from the wild or destroying their habitats, that would be great, too.

But even if you believe that chimpanzees have rights, that doesn't put them on the same level as human beings. And unfortunately, you can’t just go around bestowing personhood on every animal who deserves protection, or else soon the term will lose all meaning.

Something shouldn’t have to be human for us to respect it and see the need to treat it properly. Chimpanzees deserve respect for what they are. That shouldn’t be a difficult idea to grasp. Things other than human beings can be inherently valuable. Shocking, I know. But seriously, how can anyone say these guys aren’t awesome?

Realistically, it's likely this move by the Nonhuman Rights Group is more about raising awareness and forcing people to think than it is about actually achieving legal personhood for chimpanzees. Although, who knows, maybe they think this is actually going to work?

Regardless, chimpanzees shouldn’t need to be classified as something they aren’t in order to be protected. So if the Nonhuman Rights Project wants to take legal action against the allegedly awful living conditions these four New York chimps faced, that is unquestionably a good thing. But when you start throwing around the term “personhood” you might have gone too far.

More like this
Buckingham Palace Aide Resigns Over “Unacceptable” Comments To A Black Guest
By Shahed Ezaydi
Footballer Jake Daniels Shared His Thoughts On A World Cup Boycott
By Sam Ramsden
Iran Has Issued A Death Sentence Over Mahsa Amini Protests
By Catharina Cheung, Darshita Goyal and Maxine Harrison
Here’s How To Find Your Spotify Wrapped
By Emma Lord and Emma Carey
Get Even More From Bustle — Sign Up For The Newsletter