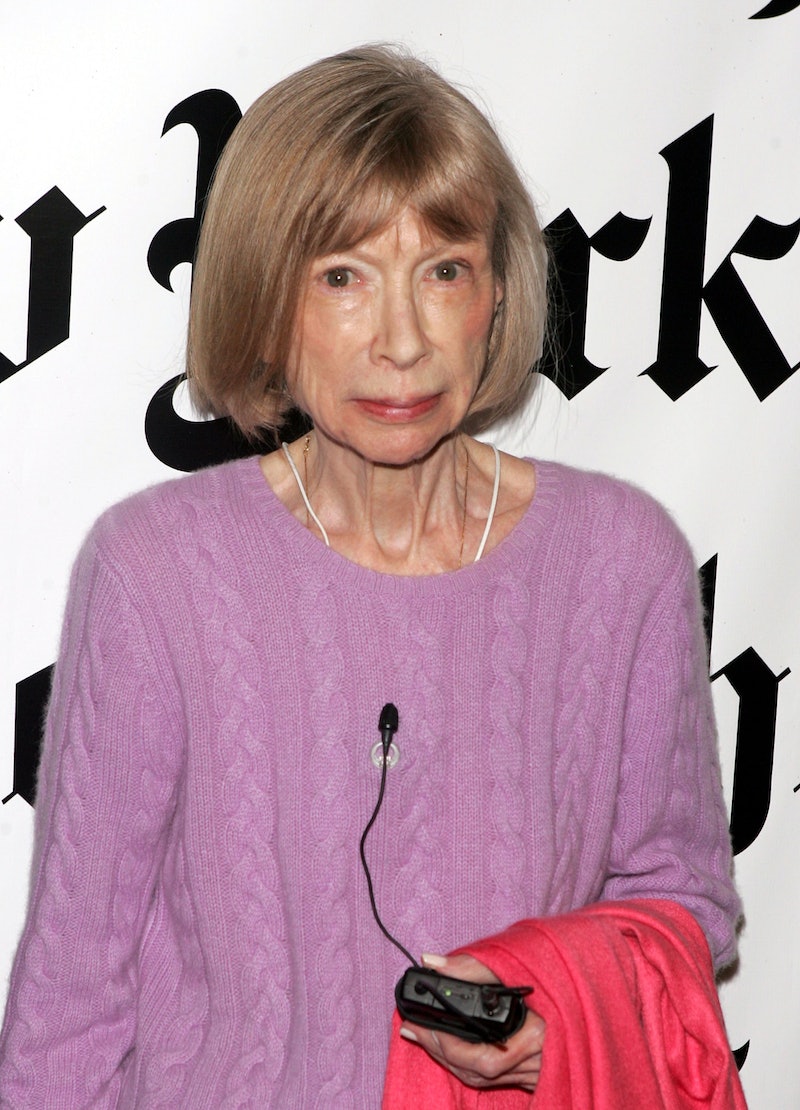 Happy 79th Birthday, Joan Didion! As any longtime female fan of the iconic essayist, journalist and novelist will tell you, Didion's writing is as essential to a woman's literary education as Beverly Cleary, Virginia Woolf, bell hooks and Sylvia Plath are (each in her unique way, of course). The Gospel According to Didion inspires special devotion in women under 40, as many of Didion's most beloved personal essays and journalistic work concern her time in New York and California in her late 20s and early 30s. Whether she's describing Joan Baez's quirks or her own neuroses, Didion's prose is always resonant and, for many, addictively vivid. The precise observation, the nervous energy, the intellectual heft, the sudden, nearly paralyzing insight: Didion changes you.

Here's a list of nine Joan Didion essays every woman should read, ideally while still in her formative years, and a peek into what makes them unforgettable:

There is a common superstition that “self-respect” is a kind of charm against snakes, something that keeps those who have it locked in some unblighted Eden, out of strange beds, ambivalent conversations, and trouble in general. It does not at all. It has nothing to do with the face of things, but concerns instead a separate peace, a private reconciliation.

Nothing was irrevocable; everything was within reach. Just around every corner lay something curious and interesting, something I had never before seen or done or known about ... I could make promises to myself and to other people and there would be all the time in the world to keep them. I could stay up all night and make mistakes, and none of them would count.

I think we are well advised to keep on nodding terms with the people we used to be, whether we find them attractive company or not. Otherwise they turn up unannounced and surprise us, come hammering on the mind’s door at 4 a.m. of a bad night and demand to know who deserted them, who betrayed them, who is going to make amends.

During the years when I was an undergraduate at Berkeley I tried, with a kind of hopeless late-adolescent energy, to buy some temporary visa into the world of ideas, to forge for myself a mind that could deal with the abstract.

In short I tried to think. I failed. My attention veered inexorably back to the specific, to the tangible, to what was generally considered, by everyone I knew then and for that matter have known since, the peripheral. I would try to contemplate the Hegelian dialectic and would find myself concentrating instead on a flowering pear tree outside my window and the particular way the petals fell on my floor.

That many women are victims of condescension and exploitation and sex-role stereotyping was scarcely news, but neither was it news that other women are not: nobody forces women to buy the package.

Life changes fast. Life changes in the instant. You sit down to dinner and life as you know it ends.

...What I remember about the apartment the night I came home alone from New York Hospital was its silence.

Not many people I know carry their end of the conversation when I want to talk about water deliveries, even when I stress that these deliveries affect their lives, indirectly, every day. "Indirectly" is not quite enough for most people I know. This morning, however, several people I know were affected not "indirectly" but "directly" by the way water moves.

9. "In Sable and Dark Glasses"

My own fantasies of what life would be like at 24 tended to the more spectacular. In these dramas of my own devise I was sometimes wearing a sable coat, although I had never seen one. I was wearing this sable coat in an urban setting that looks in retrospect not unlike Shubert Alley. I was at other times walking on a moor, although I had not yet read those English novels in which moors figured heavily. But here is how I most often preferred to visualize myself: not on a moor, not in Shubert Alley, but standing on the steps of a public building somewhere in South America (Argentina comes first to mind, although Argentina was like the sable coat, never actually seen, more concept than reality), wearing dark glasses and avoiding paparazzi. If you were to have asked me why I was standing on the steps of this public building in Argentina, I would have had a ready answer: I was standing on the steps of this public building in Argentina because I was getting a divorce. Hence the dark glasses, hence the paparazzi.

More like this
24 History-Making Black Women You Probably Didn't Learn About In School
By Ayana Lage and JR Thorpe
25 Inspiring Quotes From Black Women To Celebrate Black History Month
By Kyli Rodriguez-Cayro and JR Thorpe
Twitter Is Identifying With Sally Field & Jane Fonda’s Friendship In New Viral Video
By Jake Viswanath
Prince Harry Incorrectly Recites Christina Aguilera’s “Genie In A Bottle” Lyrics
By Jake Viswanath
Get Even More From Bustle — Sign Up For The Newsletter
From hair trends to relationship advice, our daily newsletter has everything you need to sound like a person who’s on TikTok, even if you aren’t.