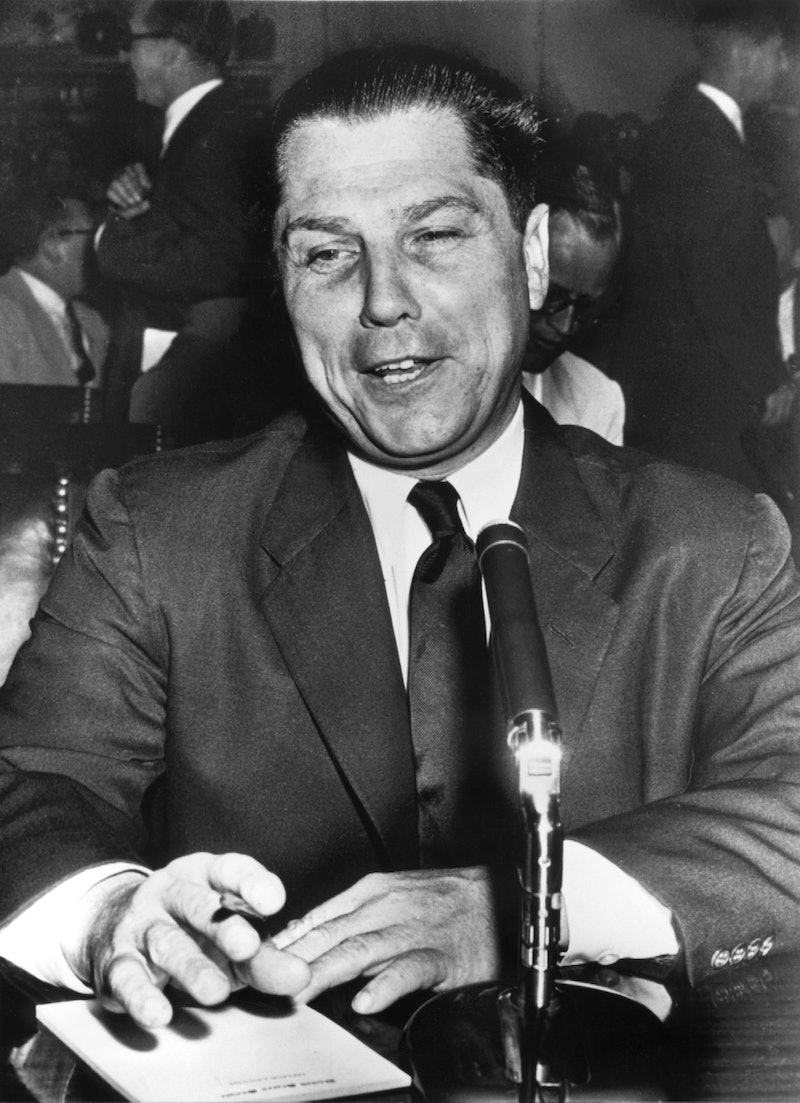 On July 30, 1975, notorious union leader Jimmy Hoffa arrived at a New Jersey restaurant for a scheduled meeting with two other union leaders. At 2 o'clock that afternoon, Hoffa called his wife, Josephine, from a payphone to say that he'd been stood up. He waited for another hour and called another contact, angry that his two associates, who were reportedly connected to the Mafia, had never showed. And then Jimmy Hoffa vanished. Over the years, what happened to Hoffa, and the conspiracy theories surrounding his disappearance, have been the subject of a federal investigation and dozens of books, movies, and websites. Forty years have passed, and his story remains one of America's greatest unsolved mysteries.

As the story goes, Hoffa had plenty of reasons to be concerned about meeting his contacts that afternoon. He was the bombastic former president of one of the country's most powerful labor unions, the International Brotherhood of the Teamsters. By the time of his disappearance, Hoffa had amassed a number of enemies both inside and outside the organization. Hoffa's legendary political influence was rumored to be the result of deep ties to organized crime — some even believed that he played a part in President Kennedy's assassination.

The federal investigation into Hoffa's death uncovered a number of theories, but little hard evidence. The Detroit Free Press recapped the investigation into Hoffa's disappearance, including the one piece of physical evidence captured from Hoffa's car: a single hair in the back seat. Since DNA testing wasn't available at the time, it was more than ten years before criminologists could even say that the hair belonged to Hoffa.

Over the years, at least four major theories have surfaced on what happened to Jimmy Hoffa.

This was the theory presented to the grand jury following Hoffa's disappearance. Investigators believed that he knew about money missing from the union pension fund that had been funneled to the mafia. Some believe that mafia bosses ordered a hit on Hoffa, rather than take a chance that he would leak the information to the FBI.

The Teamsters (Or The Mafia) Buried Hoffa At An Abandoned Site

According to some conspiracy theorists, Hoffa was killed by his associates and buried somewhere. One of the most repeated (and specific) proposed burial sites is section 107 of the New York Giants' stadium in New Jersey, according to The Week.

One of the more gruesome conspiracies surrounding Hoffa's disappearance say that the mob disposed of his body in a way that ensured no physical evidence would ever be found: at a meat-processing plant, a paper mill, or even at an alligator swamp in Florida.

Hoffa Lived Out His Days Under An Assumed Name

Finally, some even harbor hopes that Hoffa survived his standoff with the mafia, and lived out his days in South America under an assumed name. Hoffa was born in 1913, which would make him 102 years old today.

Hoffa was declared dead in 1982, but investigators are still willing to pursue clues into his whereabouts. As recently as 2013, the FBI acted on a tip into the former union leader's whereabouts, though no body has yet been found. And Barbara McQuade, current U.S. attorney for Detroit, told the Detroit Free Press that "the case is inactive, but not closed.”