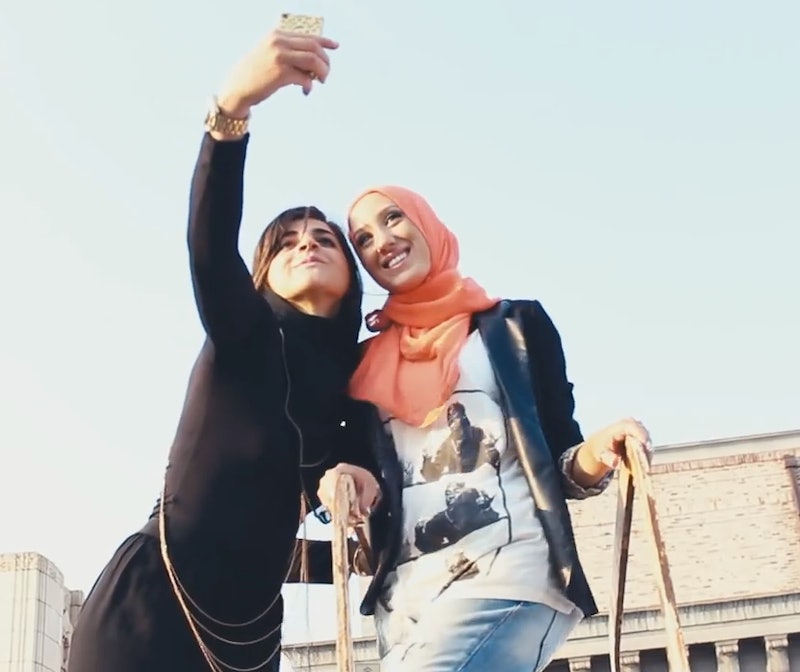 A new video called “Somewhere in America #MIPSTERZ” is sparking debate this week. ”Mipster” is slang for Muslim hipster and the video, set to a Jay-Z song, shows women wearing hijabs and hipster clothing while doing everything from skateboarding to taking photos to leaning against things in a distinctly hipster fashion. The women are racially diverse and wear their hijabs in a wide variety of styles, but the video is being called out by some commentators as one-dimensional, and they may have a point.

Most of the negative response to the video, however, seems to be a fairly nuanced response from American Muslims who feel that the version of assimilation shown in the video is a shallow one, and that the materialistic slant of the video is objectionable. It also doesn’t help that the video uses the explicit version of the song.

Over at The Islamic Monthly, Sana Saeed also takes issue with the fact that the video was produced and directed by Muslim men and that the women were nearly all professional models. “Instead of showing what makes each and every one of those women Herself,” she writes, “they’re made into this superfluous conformity of an image.” She goes on to lament:

We’re so incredibly obsessed with appearing “normal” or “American” or “Western” by way of what we do and what we wear that we undercut the actual abnormality of our comunities [sic] and push essentialist definitions of “normal”, “American” and “Western.” In that process of searching for the space of normalcy, we create ‘normal’ and through that a ‘good’ Muslim. And in all of this, we might just lose that which makes us unique: our substance.

Others object to the way in which the hijab seems to have been reduced to just another fashion statement, or the way in which the video glorifies a culture which is distinctly not Islamic. Others defend the video, however, pointing out that there is more than one way to be a Muslim. In response to a comment that the girls in the video were clearly only “part time Muslims,” another YouTube commenter asks, “how many votes do you have to get from other people to be considered a full time muslim? are the benefits better? what do you get for overtime [sic]?”

Still others assert that if the video featured male Muslim hipsters in full beards having fun it wouldn’t be questioned quite so much.

As the discussion continues, however, many are just happy that the video is sparking this much-needed conversation about what it means to be a Muslim woman in America. And it is rather remarkable how nuanced the debate seems to be, given that the Internet is not well known for handling delicate, complex subjects well.

We’ll let you judge the video for yourselves.

More like this
MOBO Awards Found Kanya King On The Woman Whose Grit & Determination Spur Her On
By Kanya King
Iran Has Issued A Death Sentence Over Mahsa Amini Protests
By Catharina Cheung, Darshita Goyal and Maxine Harrison
Here’s How To Find Your Spotify Wrapped
By Emma Lord and Emma Carey
Here’s How To Find Your Apple Music Replay For 2022
By Melanie Mignucci
Get Even More From Bustle — Sign Up For The Newsletter