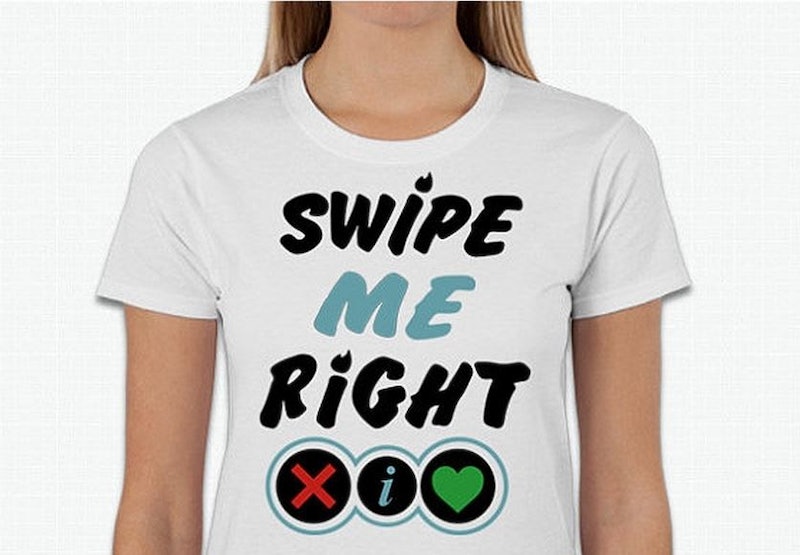 Confession: I've never used Tinder. I've been in a very happy relationship during the entire time it's been in operation, so I've had no reason to use it; also, it seems very high-pressure and that terrifies me. That said, though, it does seem to leave its users with some tales to tell — as evinced in this AskReddit thread about the worst and weirdest Tinder dates anyone has ever had. Because there's really nothing like a bad date story, is there?

I'll be honest: The thread as a whole isn't quite as interesting as I was hoping it would be. It's actually… kind of depressing. Why? A couple of reasons, but mostly because it's not full of the sort of comically bad dates you laugh about later; it's full of a lot of WTF dates you think, “Good gravy, I'm lucky to have gotten out of that one relatively unscathed” about. There's also a lot of judging, from pretty much everyone, and in ways that highlight some of the worst parts of our society: “She was hot: she wasn't hot; she was hot, but that actually has nothing to do with the rest of the story; she wasn't hot, and that has nothing to do with the rest of the story, but I just want to make sure you all know that not only was she a bad date, she was a not hot bad date; well, was she hot, at least?” and so on and so forth.

Like I said: Discouraging. And I say this as someone who found an awesome partner through online dating.

Some of the stories really are wild, though — and if anything, they're a reminder that first date etiquette is really very simple: Just treat people the way you'd like to be treated. Be courteous, and don't expect anything other than some (hopefully) nice conversation and some getting-to-know-you time (even if you swiped right on Tinder — you still have to get someone's consent before… well, doing anything at all). I know first dates can be nerve-wracking — but they don't have to be complicated.

So here. Have a gander at nine weird-ish Tinder dates. The good news is that a few of them are actually awesome stories, rather than nightmares. Head to AskReddit for more.

I'm going to overlook the “she was prettier than her pictures” comment for now, mostly because she behaved in an equally WTF manner. Of course, we'll never know her motivations for storming out — but if she really was just trying to get him to go after her? Long story short: Games are dumb, so I have to give him/her props for opting not to play.

Repeat after me: If someone tells you they aren't interested, just accept it and move on. None of this “But you 'left your socks here!'” nonsense. You cannot make someone date you when they don't want to.

I mean, really, I would argue that all pickup artists are awful, but this one sounds not only awful because he was a pickup artist, but also just awful at being a pickup artist. All bodies are awesome, so size, shape, and/or fitness aren't the issues here — what is the issue is the whole “commenting on another person's body” thing. No one gets to decide what to do with their body except the person the body belongs to, so knock it off, dude. Not cool.

Here's that text, by the way:

To which I can only say: Oh, hell no.

Well played on everyone's parts. She was up front; he did the aforementioned “accept it and move on” thing.

5. The Only Reasonable Reaction

...Was definitely to laugh in his face. You win, Healing_touch. You win.

6. The Most Beautiful Story in the Thread

OK, I know it doesn't sound super promising right now, but this is just the beginning. Read the whole thing at the permalink — it's so, so worth it. Love is such a beautiful thing, don't you think? Boners and all.

7. Tinder as a Life Philosophy

This one's another long one, so you'll have to click through to read the whole thing. Honestly? I'm nor sure I believe it's true… but I also kind of do believe it, because sometimes, things get so weird you can't make it up. In any event, though, this story is as close as I've ever seen to someone developing a Tinder experience into a life philosophy, and you know what? It's actually not a bad one.

I mean, I understand the impetus behind running a background check on a blind date; we live in a world where horrible people do horrible things, and sometimes those horrible people use online dates to do those horrible things. But if you're going to request a photo of a driver's license specifically so you can run a background check on someone? You might want to get their permission first. Just sayin'.

Story one is just kind of funny. Story two is… not. Click through to read it.