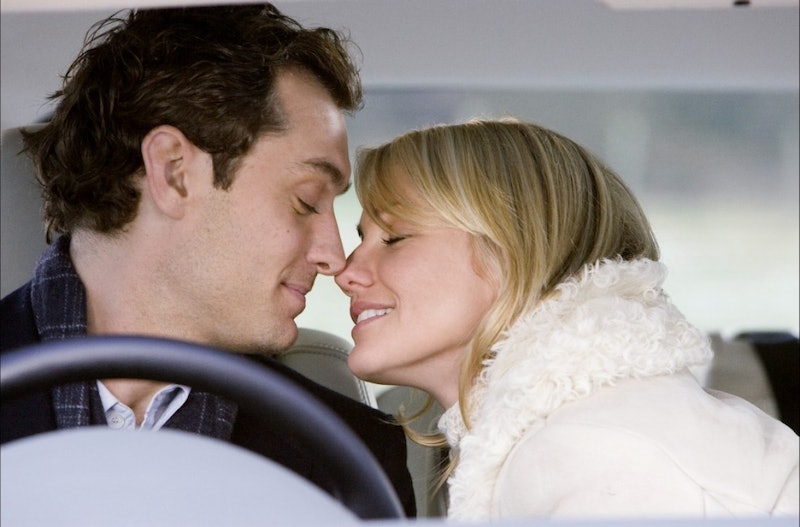 There are certain movies you watch every single Christmas without exception. The top movie on my list is always 2006's The Holiday, starring Cameron Diaz and Kate Winslet as the two female protagonists who have been screwed over by love. And while the film delivers beautiful shots of England and sun-soaked views of Los Angeles, the real treat is to watch these two women and their love stories evolve over the course of 138 minutes. To celebrate one of our favorite holiday flicks, here's nine lessons in love we learned from The Holiday.

1. A one night stand could evolve into the love of your life

While we don't recommend sleeping with any rando who knocks at your door, we don't exact blame Cameron Diaz's character for succumbing to the drunken pleas of Jude Law. Lucky for them, they both enjoyed themselves, were both safe about it (we think, we hope), and their would-be one night stand turned into a meaningful and long term love. Yay!

He's a little dorky, a little quirky, a little bizarre. He likes to narrate the movies in Blockbuster by humming their theme songs, but don't we all? One thing is for sure, he's less likely to break your heart than the pretty face, or the one who has you constantly on the back burner.

3. Men who can do impressions are probably good in bed

After figuring out that Sophie and Sophia, the two other women in Graham's life, are his daughters, Diaz's Amanda Woods witnesses her one-night-stand turned boyfriend in Dad mode. He makes hot chocolate, helps the girls build a fort, and most impressively, does a mean Mr. Napkinhead. That is, utilizing a napkin, a spoon, and his spectacles to create this:

4. If you can't shed a tear over a guy, he probably wasn't worth your time to begin with

Amanda Woods hasn't cried since her parents split up when she was a child. When she finds out her loser boyfriend was cheating on her, she kicks him out, and attempts to cry out her frustrations. But after a hilarious montage of weeping attempts, the tears just won't come. A sure sign that the d-bag wasn't worth her time in the first place.

5. If he won't answer your questions directly, he's probably avoiding telling you the truth

If he says things like, "Now isn't a good time," and "I wish you could just accept knowing how confused I am about all this," when asked if he's still engaged to his fiance, it's time to cut that cord. STAT.

Iris (Kate Winslet) has been in love with the same man for years. Unrequited love, she calls it. The man is her boss, and upon announcing his engagement to one of her colleagues, Iris still can't let go. Clearly, he's moved on, but she just can't, and we don't exactly blame her. The man has been stringing her along for years, offering up intimate memories of their time together and giving her vague but hopeful letters. Finally, Iris realizes she's been kept on the back burner, and takes charge of her life. "This twisted, toxic thing between us, is finally finished! I'm miraculously done being in love with you! Ha! I've got a life to start living," she tells him. Go Iris! Perhaps it's most important lesson, The Holiday reminded us that letting go is OK.

7. Sometimes the only person you need to love is you

While both of the leading ladies of The Holiday end up with a partner, the movie shows us that self-love is equally important, if not more so, than finding someone else to love. Certainly for Iris, the wallflower who has let a man who doesn't give a solitary shit about her define her existence. And in a memorable and moving scene, Iris finds her inner power, learns to love herself, and let go of her negative "relationship".

8. Funny guys can be sensitive too

Jack Black does not seem like the leading man. With his penchant for wacky impressions, air guitar, and Miley Cyrus-esque facial expressions, it's hard to picture Black waiting for you at the front of an altar. But as The Holiday proves, even the funny guys can be sensitive and sweet. Who makes your Christmas fettucini when you're feeling like shit? Who writes you a glorious piano theme song? Who travels all the way across the globe to take you out for New Years? The nice, funny guy.

9. Distance can't (or shouldn't) stop you from loving someone

When Jude Law's Graham professes his love for Diaz's character, she stupidly says, "I wasn't expecting 'I love you.'" The pair are inconveniently in love: He lives in the U.K. with his kids, and she lives in Hollywood working as a movie trailer producer. How could it ever work? But, maybe it's because it's a blockbuster movie, or maybe it's because love actually can transcend time and distance, but the couple (seemingly) lives happily ever after.

More like this
90 Songs To Blast During The Holiday Season To Feel All The Feels
By Brian Anthony Hernandez
Judi Dench Isn’t The Only Surprise Cameo You’ll See In Christmas Movie Spirited
By Sophie McEvoy
Fellow "Queens Of Christmas" Celebrated Mariah Carey's Failed Trademark Bid
By Stephanie Topacio Long
Kumail Nanjiani & Emily V. Gordon’s Relationship Timeline Is Literally A Movie
By Jake Viswanath
Get Even More From Bustle — Sign Up For The Newsletter