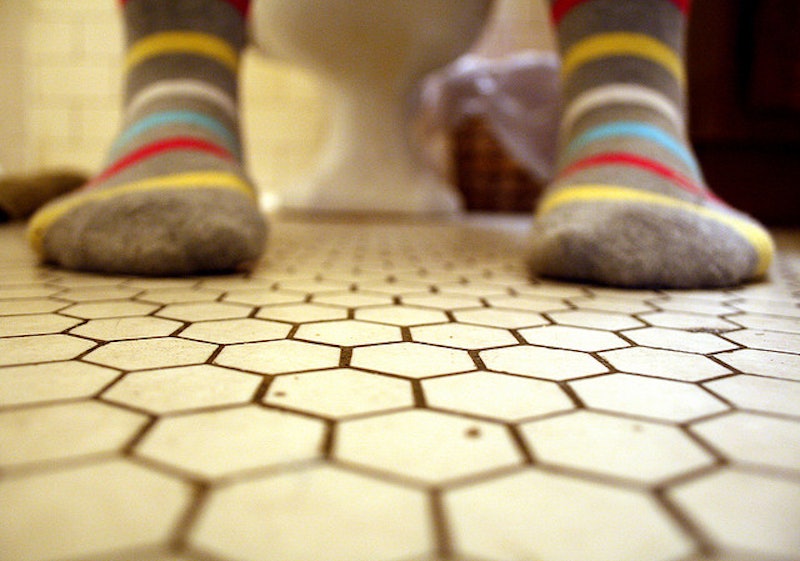 As a woman in her mid-twenties, I've handled my fair share of uncomfortable situations. Long car rides with families of significant others from the past. The chafing that happens without a doubt at mile 11 of any half-marathon. Long elevator rides with your boss to the top floor of the office. But none of those are as uncomfortable as talking about pooping. Whether you talk about it or not, the causes for constipation can be quite surprising. And it's important to know exactly what's going on with your body to make sure you're completely healthy.

Let's face it: Anything that has to do with your bowels is less than pleasant. Since regular bowel movements can vary from two to three times daily to two or three times weekly depending on a variety of things ranging from diet to stress levels, it's not always easy to pinpoint when you may have an issue. But when you do have one? Holy moly, it sucks. Sweating. Gas. That horribly awkward stomach cramping when you just don't know what your next move is. We've all been there. Luckily, board-certified gastroenterologist Dr. Murray Orbuch has heard it all before. I recently caught up with him to talk about why people get constipated.

Especially in the summer, when you're more prone to dehydration, you're also more likely to get constipated.

Because of this, your bowel habit declines and becomes hard. Hello, constipation.

The Fix: Drink up! While you may strive to get the recommended daily 64 ounces of water, in the summer your body could need even more than that. Make sipping simpler by using glasses that have built-in straws, and if you find yourself getting bored easily, add some flavor to your H20. Lemon water, anyone?

2. You're Not Eating Enough Fiber

We've all heard it before: Fiber is the thing that helps you poop. If you're not getting enough, Orbuch says that this could certainly be a cause for a tougher stool and lack of excretion. Even though it is a factor, says Orbuch, not everyone responds to fiber equally. While it may make a big difference for some, that may not hold true for others.

The Fix: Give it a shot. Load up on high-fiber foods and see how that interacts with your system. The Recommended Daily Allowance (RDA) for fiber should include roughly 40 grams of fiber daily. Good sources? Bananas, raspberries, pears, and almonds.

Sitting too much has been dubbed the "new smoking," and it's no surprise it's bad for your gut. The lack of mobility slows down your gut motility. Translation? Things aren't moving through you as fast.

The Fix: Get up, get active. The average person needs roughly 150 minutes of exercise each week, although recent studies have endorsed even more.

"The gastrointestinal tract has the second largest collection of neuralgic tissue outside of the central nervous system, so the neurons respond to emotional stimuli just like your brain does when you're panicked, stressed, or have anxiety," says Orbuch. "The gut will respond to it too. Just like people who are nervous or anxious will have diarrhea or more bowel movements, people that are depressed will have less."

The Fix: There are many ways to treat depression, but in the case that it's affecting your bowel movements, do yourself a solid (no pun intended) and get active. This way, you're double as likely to ease your problem right along.

"I have a whole army of women who I see that, when they go without coffee or cigarettes, won't have a bowel movement for days," says Orbuch.

The big question here, though: At what point should you see a doctor if you're feeling constipated?

"When it's mild and short-lived, relieved pretty quickly, and there are no other suspicious symptoms around it, you can handle these on your own for a short period of times," says Orbuch. "Once you start getting a little older, beyond 30 or 40, and you have a sudden change of bowel habit and these temporizing measures don't change anything, then it's wise to go seek out a professional opinion."