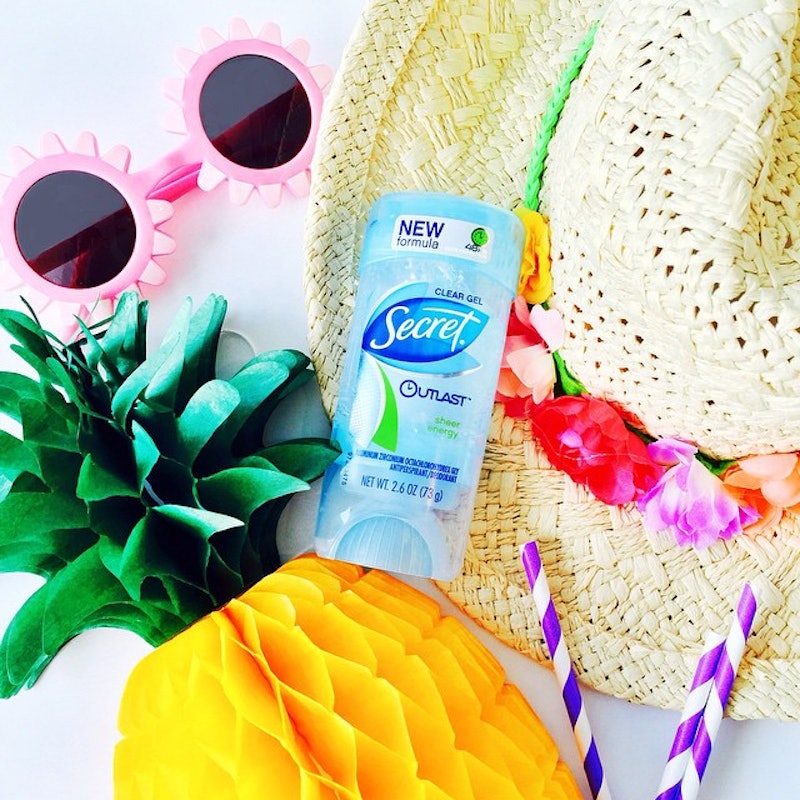 It's the middle of the summer, and the idea of going outside without deodorant absolutely terrifies me. Forgetting to put on deodorant can seriously ruin my day. But I started wondering if all the hype could be true. Is antiperspirant deodorant bad for you? And how can you tell which deodorants are safe?

The Cut recently posted an article that discusses the myths that deodorant can cause breast cancer or Alzheimer's disease. All you have to do is google this claim, and you'll be bombarded with articles about how your Dove or Secret deodorant is probably actually killing you. The article explains that there's two different kinds of deodorants: antiperspirant and deodorant. Regular deodorant covers smells by killing the bacteria in your armpits that cause them to smell, often covering any smells with perfumes. Antiperspirant has the same antibacterial products, but it also includes aluminum, which temporarily blocks your sweat glands and stops them from producing sweat.

The myth out there is that putting aluminum on your skin so close to your breasts could increase the risk of breast cancer, and that aluminum can also cause Alzheimer's. In reality, the aluminum actually doesn't enter your blood stream. Your skin acts as a barrier and keeps any chemicals from entering your body.

In reality, Alzheimer's and breast cancer are both confusing diseases, and doctors still don't know why people are affected by them. Although there is a genetic component to both diseases, they also seemingly affect people randomly. The aluminum myth most likely began because people wanted an explanation for these devastating diseases.

Long story short, it's perfectly safe to use antiperspirant deodorants with aluminum in them. However, if you want to look for more natural deodorant options, there's a ton out there. Some are antiperspirant and some aren't. Here are three of my favorites.

This product not only smells as good as its antipersperant counterparts, but it promises to last 24 hours!

This deodorant is a blend of sage, lemon, and lavender. Yum!

Not only does this deodorant smell good, but it also has chamomille to help soothe redness for your post-shaved armpits.