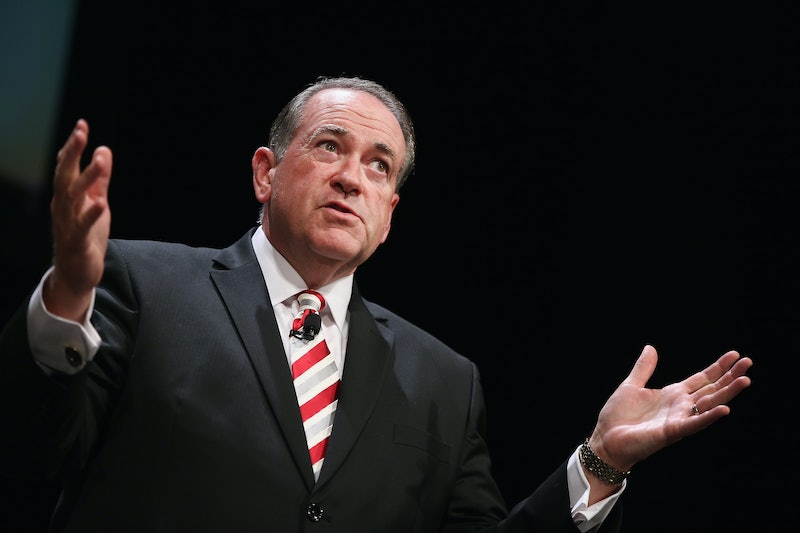 On Monday, Republican presidential hopeful Mike Huckabee compared the Iran deal's effects on Israel to the Holocaust, loudly proclaiming that President Obama was essentially "[taking] the Israelis and [marching] them to the door of the oven." Huckabee's bizarre and frankly offensive statement outraged Jewish communities, but he made the very Donald Trump-like decision to not apologize for his comment and even declared the Jewish response to his words had been "overwhelmingly positive." You know, kind of like how Trump sincerely believes he'll "win the Hispanic vote." There's a theory that GOP candidates lagging in the polls are trying to "out-Trump" the business mogul with ridiculously offensive or bizarre behavior to get attention, but frankly, Republicans have always been referencing the Holocaust, slavery, and other human tragedies to discuss standard political issues like abortion rights, national health care, and most recently, foreign policy.

It really should come as no surprise the Republican Party generally picks up minimal support from women, racial and ethnic minorities, the LGBT community, and low-income families. The GOP's sweepingly insensitive historical references typically involve their stances on basic rights or equality for minority groups. How they manage to compare abortion to the Holocaust so often will always astound me, but frankly, so will the rest of their disturbing allusions to history.

And just like that, former Alaska Gov. Sarah Palin killed two birds with one stone and managed both racism and misogyny in a single post. Sure, the Confederate flag itself didn't enslave, dehumanize, and brutally abuse black people, but its supporters and the attitudes it perpetuated certainly did. In that same vein, the flag didn't kill "90,000 black babies" last year, but neither did Planned Parenthood, so it's pretty hard to decipher what point Palin is trying to make with this post.

If her choice to compare the two shocked you, it really shouldn't have. Palin's on the record opposing abortion, even in cases of rape.

2. Rand Paul: "With regard to the idea of whether you have a right to health care, you have to realize ... it means you believe in slavery."

Kentucky Sen. Rand Paul's ability to perform such a complex routine of moral gymnastics is almost as impressive as Vermont Sen. Bernie Sanders's remarkable ability to keep his cool listening to him. Paul further elaborated:

3. Gordon Klingenschmitt: "[Pray] ... for an end to the holocaust which is abortion in america."

In March, a pregnant woman in Colorado was stabbed by a stranger, who removed her unborn child from her womb with a knife. Colorado Rep. Gordon Klingenschmitt chose to respond literally in the worst way possible. "This is the curse of God upon America for our sin of not protecting innocent children in the womb," he stated and proceeded to call on Americans to pray, not for the victimized Colorado woman, but for the end of the great "Holocaust" that is a woman's right to choose.

4. Mike Huckabee: "We have aborted more than a million people who would have been in our workforce had we not had the holocaust of liberalized abortion."

Of course, of course, Huckabee could steer a discussion on imported labor to a comparison between abortion rights and the Holocaust in November 2014. He then moved the discussion to marriage equality, because, well, of course he did: "I'm very tired of hearing people who are unwilling to change the constitution, but seem more than willing to change the holy word of God as it relates to the definition of marriage."

5. Dick Jones: "[Abortion rights supporters are committing] a holocaust against fetuses. ... Move back 70 years, we're talking about that child being Jewish and should it be aborted by being ripped out like that."

In March, at a hearing by the House Federal and State Affairs Committee concerning the "evacuation and dilation" abortion procedure, Kansas Rep. Dick Jones compared the process to the Holocaust. He stayed true to his name and used a jumble of word vomit that was almost as offensive as it was incoherent and irrelevant.

6. Sheryl Nuxoll: "Much like the Jews boarding the trains to concentration camps, private insurers are used by the feds to put the system in place."

Sheryl Nuxoll must have heard about Paul's comparison of health care and slavery and became determined to try her very best to beat it. She likened the effects of Obamacare on insurance providers to Hitler's final solution. Oh, right, and she's managed to compare President Obama to Adolf Hitler, too, in case you're interested.

7. Michele Bachmann: "There is no analogy to [the Holocaust] ... We are seeing eclipsed in front of our eyes a similar death and a similar taking away. It is this disenfranchisement that I think we have to answer to."

8. Ben Carson: "We have just gradually slid in terms of our morals to a point where we don’t ... care about the killing of human beings. ... The good news is ... we are changing. There was a time ... where there were people who thought it was OK to own other people."

Just in case you were getting sick of all the Holocaust references, go ahead and balk at this slavery reference. To Carson, women not having autonomy over their bodies should be compared with black slaves who were viewed as property. Carson has also labeled pro-life activists the modern equivalent of "abolitionists" and likened abortion rights to "human sacrifice."

Seriously, did you doubt for even a second that Ted Cruz wouldn't be on this list? This is Ted-freaking-Cruz we're talking about. Of course he managed to compare his heroic struggle against Obamacare to fighting the Nazis! Don't you dare doubt his craziness.

10. Ted Cruz: "There were fewer ... Republicans in the faculty when we were there than communists. ... [T]here were 12 who would say they were Marxists who believed in the communists overthrowing the United States government."

Of course, Cruz makes this list twice. We don't typically view the Red Scare in 20th-century America as a "human tragedy," but being identified as a communist in a time of extreme paranoia and racial tension led to everything from public harassment, lynching, losing your home and all job prospects, and government persecution. Identifying and then punishing and harassing "communists" (aka anyone known for having left-wing beliefs) was Republican Sen. Joseph McCarthy's big thing in the 1950s, hence "McCarthyism," and it would appear that Cruz himself has no qualms with throwing careless and destructive accusations, either.