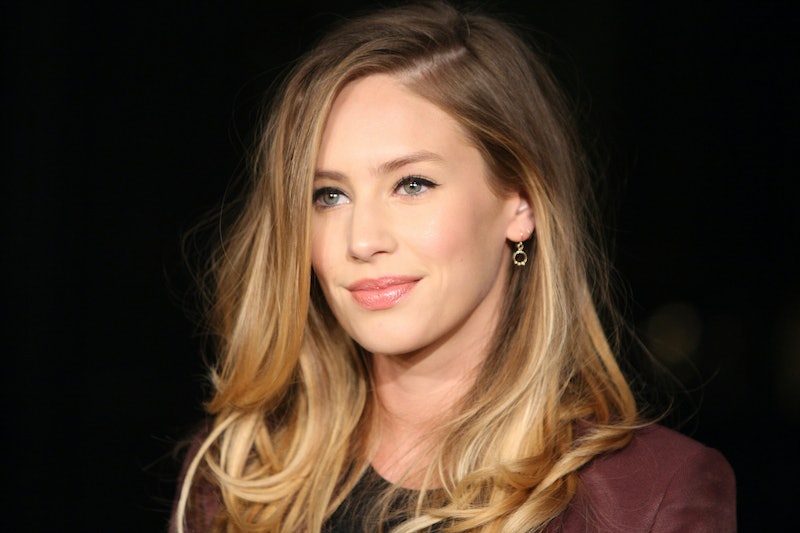 Having Forrest Gump flashbacks? No, you haven't been magically transported back in time to the wonderful world of the seventies-by-way-of-nineties-cinema, it's actually Robin Wright's daughter, Dylan Penn on the cover of ASOS magazine. And although the up-and-comer admits she's "painfully shy" and would prefer to direct, produce and write rather than star in films like her famous parents (her father is Sean Penn) the camera loves Penn too much to let her stay behind the scenes for long.

Born and raised in LA, Penn is a Cali-girl through-and-through — that flowing golden hair is proof positive. She appeared in Mario Testino's Brat-Pack themed spread in Vogue earlier this year, alongside her brother Hopper Penn, Kendall Jenner and Gigi Hadid, but she's by no means a limelight regular, although she has all the credentials.

On the ASOS cover, her latest in a solid half-dozen magazine covers in 2015 alone, she rocks a full-length suede and faux-fur coat over a crop-top, shorts and massive platforms (socks included, natch), and inside the mag, Penn gets candid with ASOS (while modeling pieces from the British brand's Fall collection) about overcoming her fears in front of the camera, and what's in store for her future.

The cover star tends to keep her private life private — she has a public and a private instagram account, although for the record her private account has more followers than I could ever hope for —but the interview is chock-full of gems ("Getting to wear Chanel is my version of a fairy tale") and truth-bombs (fashion week shows can be "kinda boring"). Check out some of the most interesting tidbits.

1.) Having two uber-famous parents didn't stop her from having a pretty normal upbringing — crummy jobs and all.

"When I was younger, babysitting or cleaning houses or delivering pizzas, I was very determined to move on and do other things. Delivering pizzas wasn’t fun, but it taught me a lot. It made me appreciate what I have now so much more," she told ASOS.

2.) Being a girl isn't always pretty.

"I think it’s important that we’re represented in a way that’s truthful. I love Lena Dunham and these ballsy women who show the ugly side [of being a girl]," Penn said in her interview with the mag.

3.) Chanel is great, but jeans and a tee are even better.

"Getting to wear Chanel is my version of a fairy tale. Not that I would wear it every day — my style is more jeans and T-shirts — but it’s kind of fun," she continued.

4.) Fashion Week needs to up its game.

"I feel like so many of the shows I’ve been to, everybody is very contained and quiet and it’s kind of… boring. The clothes are amazing, but the experience is just sit there and look pretty," Penn said of the experience of attending Fashion Week.

5.) Her writing — whenever she's ready to share it — is going to be juicy.

"Everything I’ve written is so personal and when it’s out there, that’s scary. It’s a dream, but it’s also kind of a nightmare for me. Everything that I’ve written so far has been based off of my life, or other people’s stories that I’ve heard, and most of them tend to be around families or relationships. Just stuff that I know," she shared.

6.) There's a positive side to negativity.

"I’m drawn towards drama and it’s usually late at night when I have an idea. After I have a fight with a boyfriend or something like that. Something has to spark an idea and it usually comes from a negative interaction," Penn said.

"I don’t understand the selfie thing. It’s such a part of our culture now."

Somehow, with all these gorgeous glossy covers already in the bag, I don't think Penn needs to worry about selfies.