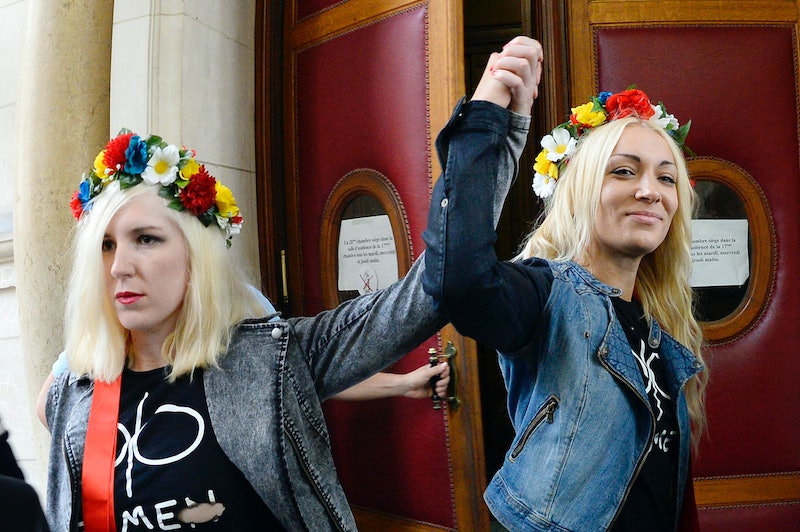 When asked to describe myself, I often lead with the word "feminist." Feminism is important to me on a personal level (my life improved tremendously after I had my "feminist awakening"), and I also feel strongly that it's an important social priority. All that said, I know that we feminists can deal with a lot of flack from those who don't share our enthusiasm for gender equality. It can be draining to constantly have people shooting us down and questioning the validity of our desire for equality. It isn't easy. Sometimes when someone wants to challenge our ideals, it can be hard to respond because we're so offended by their arguments. And often, our beliefs are so much a part of us that we can forget how to break them down and explain them to others. Even if we don't always want to engage in debate, it's still important to know how to shut down arguments against feminism.

I want to make it clear right off the bat that I'm coming to this discussion from my own positions of privilege. I'm cis, white, went to college, and now somewhere in the middle-class. I'm not a perfect feminist, but I try really hard to learn from others and to become a better ally to my sisters whose oppression goes beyond just being women. I'm very aware that I still have to work hard to become a better feminist, but I hope that the approaches I discuss below feel inclusive. Here are some of the most common (and maddening!) arguments against feminism we will confront, and how to shut them down.

This is one of the arguments I hear the most often. A discussion gets going about the status of women, and someone will chime in to declare that rights between men and women are already equal. The first thing I notice when I'm confronted with this argument is that the feminism-opposer almost always operates on the male/female gender binary, and that's already a problem. Discounting trans, gender nonconforming, and gender fluid folks is no way to have any conversation about gender equality, and we need to keep this in mind when we're having any discussion about feminism. It's certainly not true that women and other non-cis male genders have equal protections under the law. Trans individuals can't even necessarily use the bathroom for their gender, and women still do not have clearly stated constitutional rights that protect against gender discrimination at work.

When someone throws this one at you, remind them first that the Equal Rights Amendment (ERA) has not yet been passed. This amendment would make it unconstitutional to discriminate on the basis of sex at work. Men already have this right; women do not. Further point out that there is a difference between our rights and how we are treated in society. Constitutionally, people of all races have the same rights in the United States, but black people still consistently deal with race-based discrimination. Let's suppose women did have equal protection under the law (which we don't, yet) — that doesn't automatically ensure that women are treated as social equals.

"You're Too Angry And Aggressive"

Yes, I am angry. I'm angry that I get harassed on the street about half the time I leave my home. I'm angry that my male counterparts are compensated more for the same work I do. I'm angry that politicians are constantly trying to repeal our constitutional right to safe abortions. I'm angry that half of all transgender people will be sexually abused in their lifetime. These topics are painful and difficult, and sometimes you really just don't want to deal with them anymore. It can be exceptionally frustrating. So yes, feminists, like all people, will get angry sometimes. There's nothing wrong with being angry, and so long as our arguments are solid, our feelings don't make us wrong.

When people tell me I am too aggressive in my approach to feminism, I tell them that as part of a movement, I don't have time to hold anyone's hands. Hundreds of women die a year due to gender-based violence in Argentina. Mothers in the United States don't have a legal right to time paid off from work after they give birth. Ninety-eight percent of rapists will never be held in prison, or even in jail. Of course we are angry. And yes, we will be aggressive. People's lives are at stake; urgency is the only appropriate response.

Anyone can be a feminist. It's a common misconception that to be a feminist, one must be a cis woman, but this is far from the case. Feminism is a worldview and way of life that anyone can adopt. Personally, I define feminism as the belief that all genders ought to be treated as equals in every sense, and a desire to replace the harmful aspects of patriarchy with systems that empower, celebrate, and respect women, trans individuals, gender fluid and gender nonconforming people. Being a man in no way precludes a person from holding these beliefs and ideals to be true.

Yes, men have a different path to walk than women when it come to feminism. Men can be feminists and allies. A man's role in feminism is to 1) recognize and fully accept that they carry gender privilege, 2) listen to women and others who are oppressed by patriarchal systems and values, 3) use their privilege to benefit those who do not share that privilege, and 4) call out misogyny when they see it. You're a man and your guy friend tells a sexist joke? Tell them it isn't okay to say or think those things about women. Do you have the opportunity to use your male privilege to empower a trans individual? Go for it. Just remember that while you have an instrumental part to play in this movement, the movement does not belong to you.

"Feminism Is A Lost Cause"

I am not an optimist. I don't think that we will necessarily see gender equality in my lifetime. But the same way feminism doesn't belong to men, it doesn't belong solely to my generation, or to me. The struggle is for the benefit of all women; not just the ones I might meet while I'm alive. It's important that we push for equality, even if we won't necessarily see our hard work come fully to fruition. What I tell others (and even myself, because I get frustrated with slow progress, too) is that the end goal of feminism isn't always necessarily to turn the world into a feminist paradise. We have different goals at different times. Sometimes the goal is to pass the ERA, sometimes it's to get safe housing for LGBTQ kids, and sometimes it's to tell our little sisters not to let the boys at school pick on her because she's just as good as they are.

See? Progress doesn't seem so far-fetched now, does it?

"Feminism Is Sexist Against Men"

I hear this a lot. I bet you do, too. It's one of the first things someone who doesn't understand oppression will claim in an attempt to tear down arguments for gender equality. The only real way to address this assertion is to have a discussion about how oppression works. Basically, oppression flows in one direction only, from the privileged oppressor to the oppressed. It's a socially and culturally supported misuse of power that keeps one group at the top and others beneath them in many senses — financially, physically, etc. Can women be biased against men, say rude things to them, or treat them poorly? Yes, no doubt. But because women are not in a greater position of social power, these are incidents of discrimination, not oppression or sexism. Sexism is when a certain sex or gender (in the case of contemporary society, this gender is women and trans* people) is systematically discriminated against, to the point that they are treated as subordinate or otherwise less than the dominant group. As long as men are the dominant group, they can't be the victims of sexism.

I know that sounds kind of heady, but it's just not possible for men to be the victims of sexism. We are all hurt by misogyny and patriarchy (there are unfair expectations of men in our society as a result of patriarchy), but men are not culturally, socially, or legally oppressed by women.

"I'm A Woman, And I Don't Need Feminism"

Well, we all need feminism. A woman who says this might need to be reminded of her own privilege before she makes this kind of judgement. She might be in a position of greater privilege as a woman (white, upper-class, educated, straight, cis) and have not necessarily experienced some of the more brutal effects that a patriarchal society dishes out. But she has definitely experienced sexism, whether she realizes it or not. Ask her whether she knows how much the men at her workplace make, and if it's the same pay as hers. Do men dismiss her opinion and interrupt her on a regular basis? Does she get catcalled walking down the street? Has she ever been coerced into or forced to have sex?

Even if the answer to all of these questions is "no," again: Feminism isn't about the individual. It's not about you on your own — it's about all of us. Women need feminism not only because your life has been made more difficult due to your gender, but also because there isn't a person on the planet who would be better off without feminism. Feminism is the construction of gender equality, meaning that we would not live in a society that condones and perpetuates oppression. Put simply, all of our lives would be better. What about that sounds like it isn't necessary?

More like this
How To Fight For Reproductive Rights, Based On How Much Time You Have
By Courtney Young
The Music Industry Continues To Fail Black Women
By Precious Adesina
Sandra Bullock, Girlboss Extraordinaire
By Matt Harkins & Viviana Olen
Yomi Adegoke On The Offline Diaries & The Power Of Representation
By Jessica Morgan
Get Even More From Bustle — Sign Up For The Newsletter