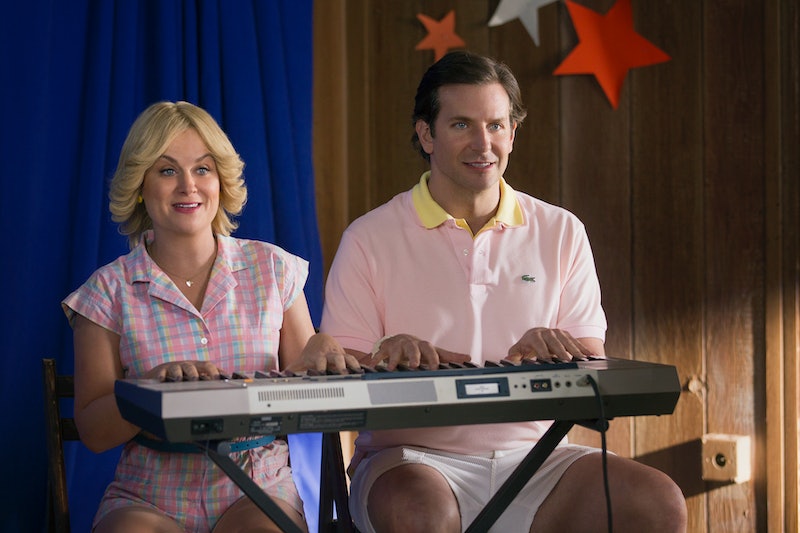 Summer camp is all about making memories, which is one of the best things about the cult comedy Wet Hot American Summer's return to Netflix. The film was made fifteen years ago, but the entire adult cast, including Amy Poehler, Bradley Cooper, and Paul Rudd, reunited for one last summer of friendship and crafting. Are there Easter Eggs in Wet Hot American Summer: First Day Of Camp? Absolutely. There are several important shout-outs for past and future fans of the 2001 film.

All character details, like all the counselors finding Beth hilarious and Gene's Vietnam past, are the same. Several aspects of the basic structure are the same. For example, the goings-on at camp are paired with dramatic conspiracies and the same font is used to keep us on track with the timeline. You won't see him, but listen carefully for an homage to the camper "Moose" and his rockin' announcements. While there are plenty of new faces at Camp Firewood, it's still the same camp. The new blood won't distract from all of the classic characters and gags.

How did they pay homage to the film that brought them together? Attention campers, if you read on there will be major spoilers for the series. Go watch all the episodes first and come back. It will take four hours. Seriously, I'll wait. If you're ready, here are all the Easter Eggs and references to the original.

The series opens with a party at a campfire, just like the movie and with the same music.

2. The 'Ships Are All Different

Andy has to "work" for Katie, who is in a relationship with a counselor at Camp Tigerclaw. Meanwhile, Ben and Susie are together romantically, Gene and Gail are engaged (though she meets Ron at the end of the day), and Coop is "dating" a new counselor named Donna.

He's an exaggeration of the "nice guy" trope in movies and on the show. However, he doesn't notice Katie until the very end of the series. This time, his love interest is Donna, who is very clearly into someone else. However, his naivety stays the same.

4. Samm Levine As The Voice Of The Beekeeper

While two different child actors play the Camp Radio host who never showers on screen, both are dubbed by the Freaks and Geeks star.

At the beginning of the series, everyone is excited about Alan Shemper, the stand-up comedian who MCs the talent show on the last day of camp.

When we first see Elizabeth Banks' character on the Netflix show, she has barbecue sauce all over her face, same as the movie.

7. Abby Bernstein is a Camper?!

Wait, what? She "matures" during the series, but I always assumed she was one of the counselors. Is she?

8. A They Came Together Reference

One of Coop's campers on the show has an unfortunate incident involving soiled bathing trunks that he has to explain quickly. The only one who buys his story immediately is Gene — which is funny because Christopher Meloni has a similar situation (okay it's almost exactly the same) in They Came Together, also from David Wain and Michael Showalter.

Not only is the above line referenced, but we learn that the inspirational can was the original Camp Director, Mitch. While the can was voiced by H. Jon Benjamin in the film, we actually see the actor first as Mitch.

In Wet Hot American Summer,Henry mentions some problems he's having in the world of Academia. In the Netflix series, we see them played out. Bonus: when Henry finally meets Beth, they flirt in the same shruggy way.

While Electro-City is not a real musical, Logan's audition song is the very well known showtune "Corner of the Sky" from Pippin. This is fitting, because Wet Hot American Summer ends with the number "Day by Day" from Godspell, another Stephen Schwartz musical.

The Arts & Crafts cabin is still a therapeutic place for Molly Shannon's character, no matter who she's romantically involved with at the time.

13. Eric Writes The Song From The Movie

Eric is a reclusive rock star on the camp grounds, played by Chris Pine. His uncovered masterpiece? The song that Gene and Coop have their dance/workout montage to in the film. The song is called "Higher & Higher" and even the eagle is included in the series. Perfect!

14. Victor Has A Sexual Time Crunch

Instead of racing to the woods to meet Abbi Bernstein, he has to run to the store for condoms. At the end of his journey, he gets into a a laughing fit with Joe Lo Truglio's character that also references their scenes in the movie.

The villainous fancy camp was referenced in the Wet Hot American Summer movie when they arrived for a baseball game that was cancelled at the last minute.

16. Gene Flirts With The Fridge

We see Gene lightly touch and notice a fridge. He will later hump this fridge. He mumbles a nonsense phrase about what he's doing to do later, like he does in the movie, but it takes until the very end of the series for his transformation to be complete.

The lawyer played by Michael Cera has the name Beth seemingly "makes up" in the original to get out of an awkward conversation.

That same scene starts the same way the movie does, with boy campers sneaking out of the girl's cabin in hoodies. In fact, those boys look like they're in their early 20s now — are they the same extras?

Every time anyone throws something in the show or the film, the sound effect is exaggerated to sound like something breaking.

She makes similar (and even more 80s) references in the series.

21. "By the end of August, everyone will feel like they're 15 years younger!"

Mitch (the Can) tells Beth that, as the new Director, she'll revitalize the camp. I get it!