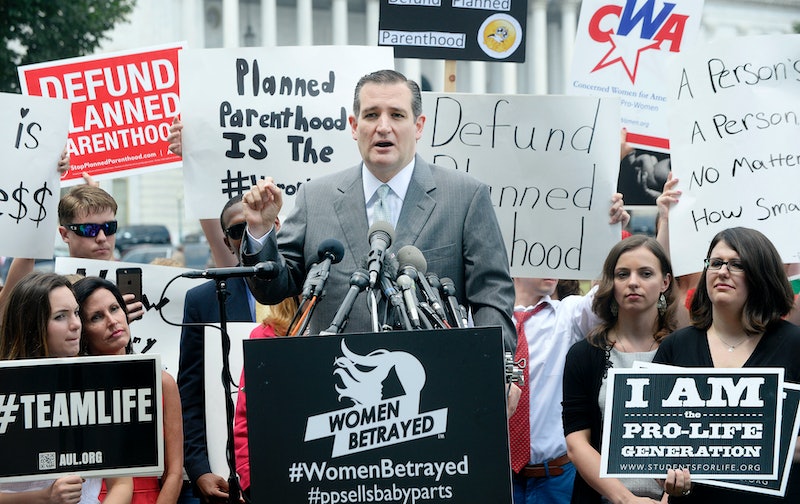 Following a slew of undercover videos, hacking, and bad press, Republican lawmakers are making a heavy push to strip women's health of its government backing, but there's no need to worry just yet — there are a few ways to tell Congress to not defund Planned Parenthood. Next week the Senate will vote on whether to revoke the $528 million in government funds that goes to supporting women's health, reproductive or otherwise. But even if this vote is defeated, the plan to defund has been written into a larger spending bill, which must be passed in order to keep the government open. Which means it will be a long fight.

The GOP push to defund the health organization has a lot of backing, from both staunch conservatives like Ted Cruz to moderates like John McCain. But Democrats like Nancy Pelosi have vowed to fight the bill and refuse to revoke funding, even if it means forcing the government to shut down again. It's become a familiar tactic for the GOP, and one that no one likes — which is why it's crucial that voters show their support.

One of the only silver linings to this effort is that even if the organization is defunded, low-income women who are eligible for Medicaid will still be able to receive medical aid and attention, except for abortions. But it will be drastically limiting the scope for the rest of the country.

Because the ensuing debates about Planned Parenthood funding are sure to be long and contentious, it's important that supporters apply continued pressure to Congress and their representatives to make their opinions known. Here are just a few ways you can do that.

There are a ton of great ways to show that you stand with Planned Parenthood, but right now you should definitely start with signing their petition. On their site (the part of it that hasn't been hacked) there's a petition that will be sent to lawmakers that makes it clear that Planned Parenthood supporters won't be scared off. "We've seen all this before," the petition says. "First, small groups of extremists launch fraudulent claims to shut down health centers that serve millions. Then, out-of-touch politicians seize on those lies to push abortion bans, defund Planned Parenthood, and deny women access to care." You can sign the petition here.

Show Them It's Not Just About Abortions

It's important to make sure that Congress knows they won't just be defunding abortions — they'll be defunding pap smears, breast exams, STI testing, and so much more. Those who seek defunding can't see past one aspect of the larger organization, or understand that they provide comprehensive, reliable, affordable health care for women who desperately need it. Check out the movement Unite For Reproductive & Gender Equity and the petition that they're sending to Congress.

Go Above Their Heads

Sometimes when people won't listen to reason, you have to go to the person who's in charge. If Republican leaders in Congress are successful with their push to defund Planned Parenthood, there's still a good chance that President Obama will not sign the bill. But that would be a big gamble for him, especially if it's tied to government funding. So be sure to let him know how important it is to maintain accessible women's health care, and that you'll support his veto. You can email, call, or write a letter to the White House, and try to get your voice heard.