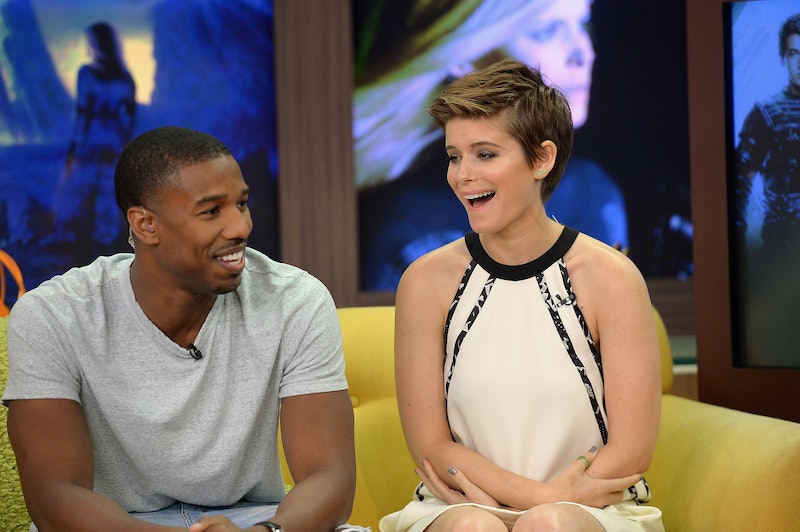 Get ready to cringe with secondhand embarrassment. On July 30, Fantastic Four stars Jamie Bell, Kate Mara, and Michael B. Jordan sat down for an interview with two DJs from Atlanta's Rock 100.5 Mornings, and what started out as a routine stop on the press tour promoting the upcoming movie turned into a total trainwreck: a sexist, racist, excruciatingly awkward trainwreck. One DJ didn't waste any time cutting right to the chase with an insanely insensitive and all-around stupid question when he asked, "From what I've seen, you're brother and sister [in Fantastic Four]... you're white and you're black. How does that happen?"

In a video of the interview, Jordan explains, "They could be raised as brother and sister. There's a whole bunch of family dynamics that could be without the obvious adoption." Yet the hosts seemed determined to press on with another round of terrible questions and what seems to me like flat-out sexual harassment, this time aimed at Mara and her short haircut.

"You're way, way hot," one of the radio station DJs said. "Why'd you cut the hair? Your hair was beautiful." Mara answered, "I cut my hair for a movie I just did... They asked me to! I'm an actress. I have to be a chameleon." Just when it looked like this interview couldn't get worse, the radio hosts continued piling on the invasive questions, asking Mara if she'd grow her hair out again, and seemed determined to make their guests feel as uncomfortable as possible with comments like, "I'm a toe guy, your toes are fine." Ew!

Thankfully, the interview didn't last long, as the actors' crew had the interviewers leave the room shortly after. One of the DJs conducting the interview, Jason Bailey, released a statement to Buzzfeed defending his questions about Mara's and Jordan's characters' sibling relationship and the creepy "compliments" his co-host made to Mara, but only managed to make himself and the other DJ sound even creepier and more awful overall.

"I think they were kind of just going back forth in a playful way," he said. "As for him complimenting her toes and why people are upset about that…sorry…no idea. Steve likes girl’s toes. People should be appreciative when they get complimented." Um, no thank you. That's not a compliment, that's sexual harassment, and it's gross.

These guys are The Worst™. Props for Mara and Jordan (along with Bell, who, despite not being the center of the horrible interrogation, stuck up for his co-stars) for handling the interview so well. Their grace shouldn't be a surprise, though — they are superheroes, after all. Check out the horrible interview below.