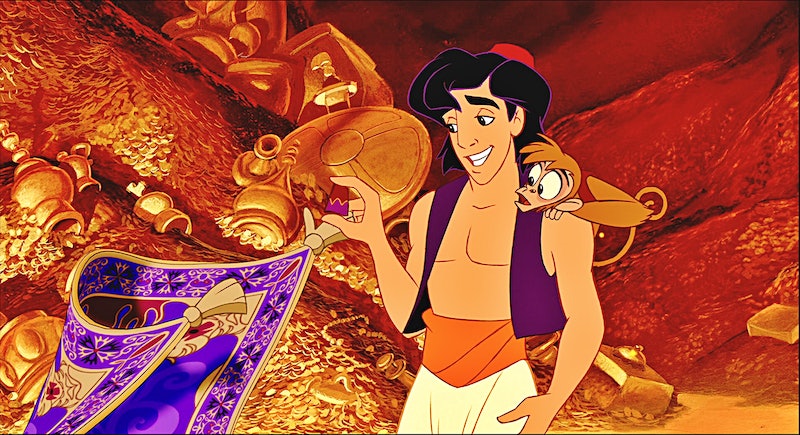 During my childhood, I used to wish I could go and actually live in the world of Disney cartoons. Fortunately, Disneyland and Disney World theme parks help us all come close to fulfilling that desire. But even that magical world has roots in reality, as many Disney characters are inspired by real-life people. That's right — The Little Mermaid's Ariel, Beauty and the Beast's Belle, Aladdin's Genie, Sleeping Beauty's Princess Aurora, and so many more beloved characters were actually modeled after famous and non-famous people who exist in the real world.

Animators often use real people as their source of inspiration, because art usually imitates life. For instance, the Rescue Rangers' Chip was based on Indian Jones, while Tom Selleck in Magnum P.I. was definitely the inspiration for Dale. Fry from Futurama wears the same threads as James Dean's character Stark in the classic flick Rebel Without a Cause. It's pretty awesome that someone's legacy can live on in a brand new character with features, hair, and clothing that echoes their own. But while some real-life inspirations for Disney characters might be obvious, some of them are not unless you look very closely.

Here are some of the real-life inspirations for Disney characters that may (or may not) surprise you.

Who knew, right? The animators based the appearance of the hero on the Mission Impossible: Rogue Nation actor.

2. Ariel Based On Alyssa Milano

The Mistresses star didn't know it at the time, but she was the model and inspiration for Ariel's look. The actress revealed how she found out about it when she appeared on the Wendy Williams Show in 2013 (above). "I didn't know that when it was going on," she said. "But they asked me to host The Making of 'The Little Mermaid' and it came out there that the drawing and likeness of the little mermaid was based on pictures of me from when I was younger."

Directors John Clements and Ron Musker wanted the late comedian to play Genie, so they had animator Eric Goldberg to draw Williams as a genie to convince both Disney and Williams, according to the Los Angeles Times. As we know, Williams got the part, and it's now one of his most memorable roles.

"Robin totally got what kind of potential animation had in utilizing his talents," Goldberg told the paper. "If you think back on a lot of animation voices over history, especially from 1930s and '40s, many were radio actors. They could express so much with their voices... What Robin had in common with them is a set of vocal chords that were 100% elastic."

4. Jungle Book Vultures Based On The Beatles

The mop haircuts of the vultures in the movie are definitely from the classic rock band, because it was intended for John, Paul, Ringo, and George to voice the characters. The band's manager was all for the appearance, but John Lennon allegedly vetoed any chance of it happening.

Writer Stoner served as both the live action model for Ariel in The Little Mermaid and the model for Belle. In the 90s, she wrote for classic toon shows like Animaniacs and Tiny Toon Adventures.

6. Tinkerbell Based On Margaret Kerry

It's been long rumored that Tink's model was Marilyn Monroe, but that's not true, according to many sources. The real inspiration for the pixie fairy is Kerry, who worked as the live action model for the character.

This actor famous for playing Dracula also served as the basis for the Fantasia villain. While the actor's appearance remains in the character, his live action movements weren't quite right, so animator Wilfred Jackson was brought in to help.

8. Snow White Based On Marge Champion

Champion modeled for many Disney films, but her first was Snow White. At one point, she was even asked to wear a football helmet in order for the animators to envision Snow White's head as larger than average.

This radio actress provided the basis and live action looks for two Disney villian-esses: Cinderella's Evil Stepmother and Maleficent in Sleeping Beauty. Disney had her wear the headgear and everything.

10. Pocahontas Based On Irene Bedard

The actress provided her voice, as well as her live action movements for the character. How much of her traits ended up in the movie? Well, it was enough for her child to notice. "My 2-year-old already recognizes 'Mommy' on the screen," Bedard told Ultimate Disney. "My brother came all the way from Alaska to the Central Park premiere and throughout the screening, he constantly nudged me because he recognized traits of mine."

More like this
Trevor Noah Hilariously Clapped Back At Racist Attacks On ‘The Little Mermaid’
By Brad Witter
12 ’90s Movie References You Missed In 'Do Revenge'
By Radhika Menon
Harry Potter's Viktor Krum Has Undergone A Huge Transformation Since Hogwarts
By Sam Ramsden and Meguire Hennes
What Does Nancy Jo Sales Think Of 'The Real Bling Ring'?
By Arya Roshanian
Get Even More From Bustle — Sign Up For The Newsletter