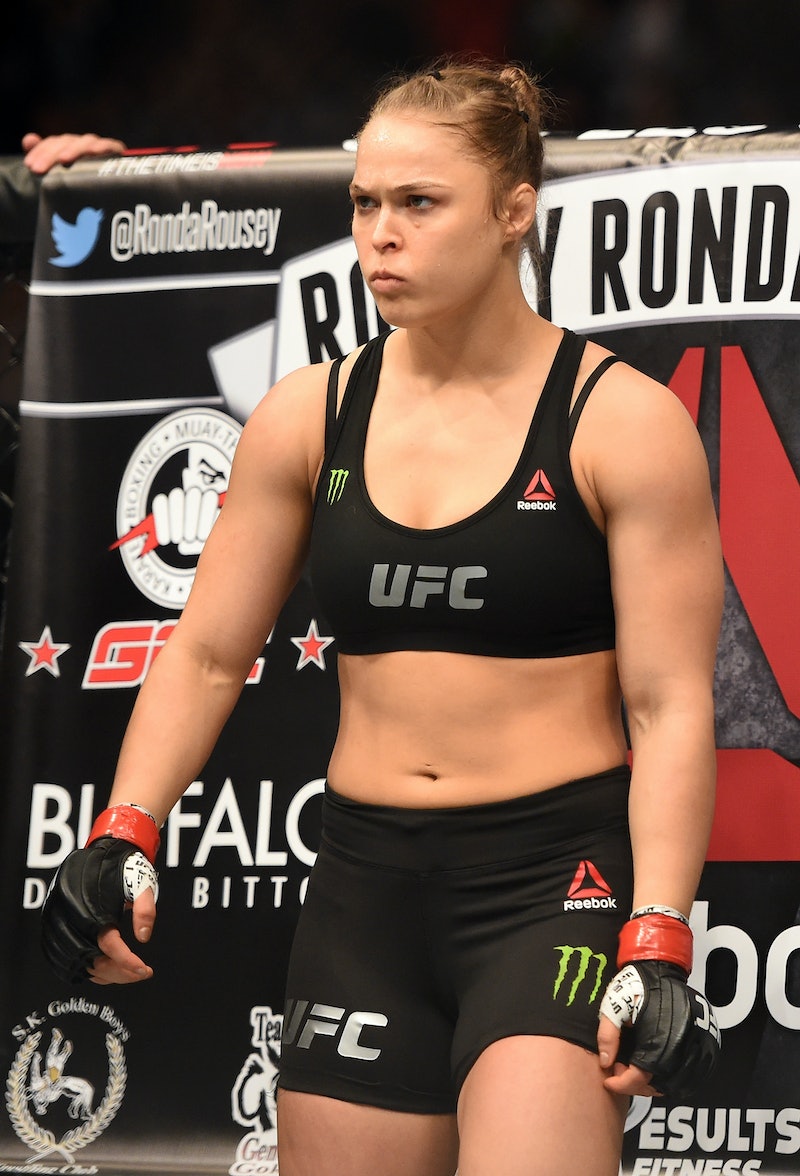 This post is dedicated to Ronda Rousey, with whom I have just recently fallen in love, and who now tops my list of "Feminists I Want To Meet Immediately." The mixed martial arts (MMA) fighter was the first U.S. woman to earn an Olympic medal in Judo at the 2008 Beijing Summer Olympics. And at the Ultimate Fighting Championship (UFC) 190 on Saturday, Rousey beat her opponent Bethe Correia in just 34 seconds. She's an undefeated MMA fighter and has undoubtedly made a name for herself in the sport. But it's not just what she does in the ring that makes this champion shine; it's what she says. Just by existing in the world of MMA fighting, Rousey is a symbol of power and empowerment, and she's got the quotes that prove it. Let's take a look at some of the most feminist quotes Ronda Rousey has ever said.

Rousey is known for calling the shots and saying what's on her mind, which makes her the perfect person for any young girl to name as her No. 1 role model. In a July Esquire profile, the magazine said that "Rousey speaks like she fights: quick, pointed, and direct." And perhaps that's the best way to speak when you're saying badass things about body image and self-esteem and staving off unworthy haters.

Yes, Rousey deals with trash-talkers in the ring, and she's dished back her share of fighting words as well, but she's the woman to watch and to listen to both in her sport and her life. Here are six examples of all the times Rousey opened her mouth and won feminists' hearts:

She Reminds Her Haters That Her Confidence Is Valid

Some people like to call me cocky or arrogant, but I just think, "How dare you assume I should think less of myself? The problem isn't me thinking I can achieve any goal I set for myself, the problem is you projecting your own self doubt onto me."

Rousey's unstoppable because she's got the drive to keep her going. And she just doesn't have time for the people who try to stand in her way.

My mom has a lot of lines. She also says "no one has the right to beat you, regardless of who they are."

Rousey fights hard, and she never forgets that she's the one in charge. According to an interview with UFC's website, the above is a quote Rousey keeps at hand and takes with her into the ring. It seems to be serving her well.

People say to me all the time, "You have no fear." I tell them, "No, that's not true. I'm scared all the time. You have to have fear in order to have courage. I'm a courageous person because I'm a scared person."

In a December 2012 Esquire interview, Rousey sums up what many women face every day: It's OK to admit you're scared. Emotions are good, and no one should make you feel bad for them. Fear is courage. Oh, Ronda "Rowdy" Rousey, you're so profound.

She Calls Men Out On Their B.S.

I either get men coming up to me like, "Oh, my God, baby, I love you!" or else they're too shy to approach me. Can I get just a little in between?

Rousey knows she's a lot to handle, and that's why she's excellent. But some dudes just don't seem to know how to approach her, and she wishes men didn't react in such a polarizing way when they see a powerful woman. With you calling the shots, Ronda, the patriarchy will surely change for the better.

She Knows Her Body Is Beautiful And Rejects Society's Expectations

I think it's hilarious if someone says my body looks masculine or something, I'm like; "Listen, just because my body was developed for something other than f*cking millionaires, doesn’t mean it's masculine. I think it's femininely badass as f*ck because there’s not a single muscle on body that isn’t for a purpose because I’m not a do nothin' bitch.

That's right. Rousey earned every single muscle on that literally kickass bod of hers, and she knows no one can tell her that kind of strength isn't feminine. She's also not afraid to say a few curse words, which just tops off the bad-ass equation.

She Owns Her Self-Worth

When I was in school, martial arts made you a dork, and I became self-conscious that I was too masculine. I was a 16-year-old girl with ringworm and cauliflower ears. People made fun of my arms and called me "Miss Man." It wasn't until I got older that I realized: These people are idiots. I'm fabulous.

Yes, yes, you are fabulous, Ronda Rousey. Thank you for reminding the feminist nation that beauty is whatever you want it to be, cauliflower ears and all.

Editor's note: This article does not acknowledge that Ronda Rousey has made transphobic statements in the past. In an interview two years ago, Rousey told the New York Post that Fallon Fox, a transgender MMA fighter, has an unfair advantage. "She can try hormones, chop her pecker off, but it’s still the same bone structure a man has. It’s an advantage. I don’t think it’s fair." In the 24 months since that interview, Rousey has yet to correct that statement.