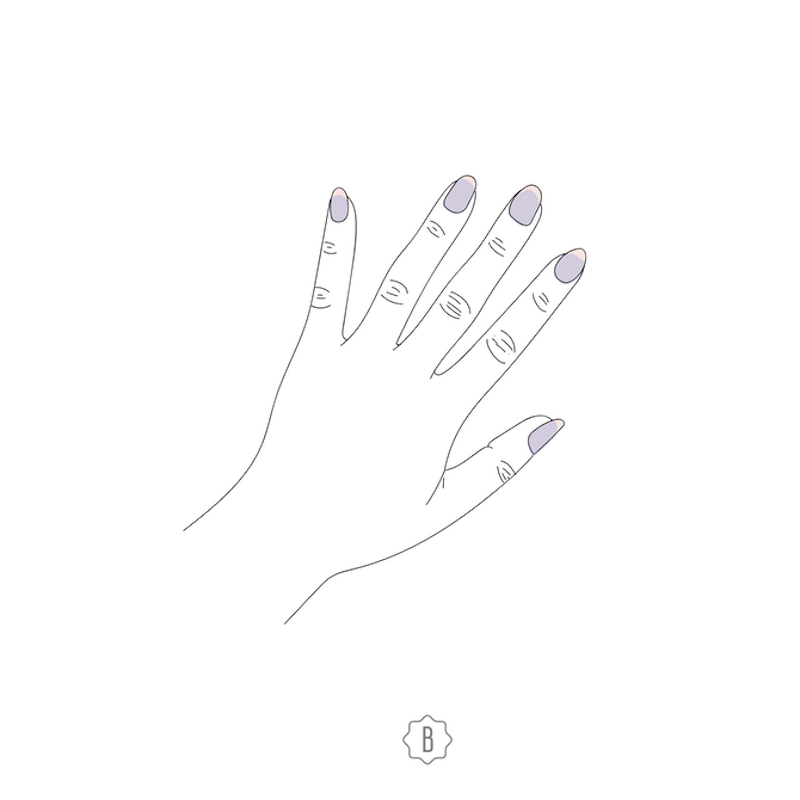 I generally think of my nails as having two states: polished and unpolished. But as it turns out, there are plenty of things your nails can say about your health. Dehydrated? Your nails can tell you that. Developing psoriasis? Yep, the warning signs are on your finger nails. I guess those dry nail beds might be more than just the result of washing dishes and harsh soaps.

Sure, you can usually tell if you feel sick or rundown, but there are other health problems that don't necessarily present troublesome symptoms. You can be dehydrated without even knowing it, for example. That's why looking to our bodies for cues is important, so we can catch all those warning signs for potential problems that we might not be able to feel. It's true — our nails deserve a lot more credit than we give them, apparently.

By now, you're probably pretty good at recognizing red flags in your hair (brittle strands=striping your hair of natural oils), and on your skin (dry skin=omega-3 deficiency), but you might be less familiar with what the state of your nails means. So next time your polishing them up, look our for these warning signs.

Nails that are yellowing or thickened could indicate a fungal infection. It's difficult to treat with topical medications, so you might need to visit a doctor for an oral medication.

Dark lines on your nail bed could indicate melanoma, and that is not something that should ever go unnoticed.

Seriously pale nail beds could be a sign of anemia, diabetes, or even liver disease.

Small cracks or grooves on nails are associated with psoriasis.

Nails break, that we know — but if your nails crack fairly easily, this could reflect thyroid problems.

Just like your face turns blue when you aren't breathing, blue nails indicate a lack of oxygen. This could be caused by a respiratory disease or vascular problem.

Horizontal white lines are a common indicator of kidney disease, lack of nutrients like protein, and liver abnormalities.

Nails that curve inwards could mean an iron deficiency, while spoon-shaped nails can be a sign of lupus.

This one is a little more obvious, but since it's probably the most common, it deserves a definite mention. If your cuticles are dry or peeling, there's a good chance you're dehydrated. Drink up, and moisturize!

More like this
This Psychological Effect Might Be Keeping You From Hitting Your Goals
By Lexi Inks
12 Absolutely Angelic Cherub Tattoo Designs
By Paris Giles
This Week’s New Makeup Releases & More Beauty Headlines
By Audrey Noble and Erin Stovall
Your Guide To Treating Hyperpigmentation, Straight From The Pros
By Shani Hillian
Get Even More From Bustle — Sign Up For The Newsletter