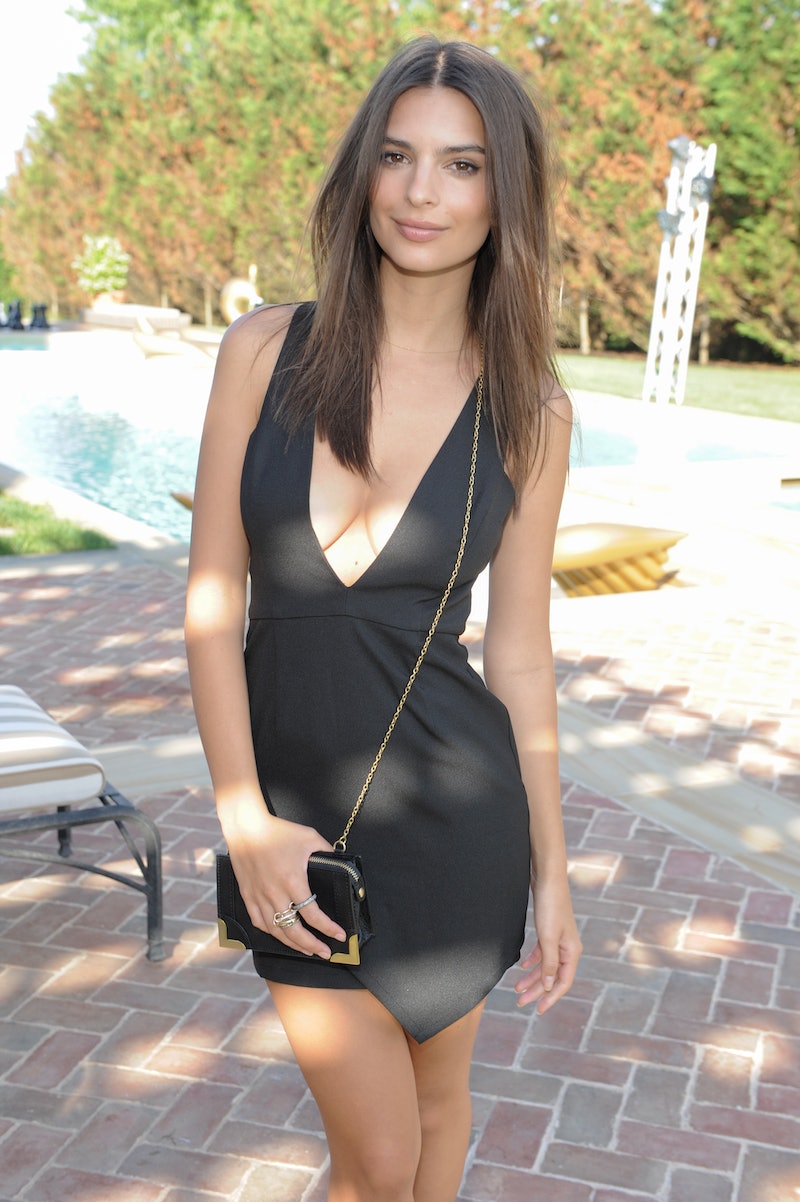 Once again, the model, actress, and "Blurred Lines" babe has fully blown me away with her beauty. Emily Ratajkowski covers the British GQ as a dominatrix of sorts for the magazine's September 2015 issue. The 24-year-old covers the mag not once but twice, actually, for double the fun. Each cover is totally unique. For one cover, Ratajkowski is biting on a silver chain and wearing fingerless leather gloves, with her tomato red nails exposed and her long mane of chocolate locks tightly swept back off her face. And on the second cover, Ratajkowski displays her bold brows while biting on a bright red tube of lipstick. It's all pretty fierce.

On both covers, the model/actress sports minimal eye makeup, a strong brow, cheek contouring, with a matte lip on one cover and a bold red lip on the other. In both covers, the focus is squarely on her features, especially her cheeks. But you know what? In my opinion, Ratajkowski totally looks like Natalie Portman's doppelganger on this cover. Well, maybe if Portman took some posing tips from Kim Kardashian. That seems about right.

Even so, I cannot deny that Ratajkowski and Portman have similar delicate facial features, namely their eyes and their cheekbones. They could be sisters. I totally admit that I did a double take upon seeing one of the covers, thinking it was indeed the Oscar-winning and classically beautiful Portman going for a totally different and edgy look. In any case, both covers are beautiful.

See for yourself what I mean about the resemblance, especially in cover number one.

And now for the real Natalie Portman.

Portman has equally feminine, swan-like features. No pun, since she won her Oscar for Black Swan.

Both ladies are beautiful with their hair totally off their faces. Or with a shaved head, as Portman was after filming V for Vendetta.

Now, about that second/alternate GQ cover, since one Ratajkowski cover isn't enough: She looks slightly less like N. Portman on the lipstick cover, but she remains majorly gorgeous with her shimmery gold shadow and that slick of crimson paint on her pout, with the lipstick case in her mouth. The bullet is jutting outward and it projects such feminine strength. Although GQ hasn't released images of the cover on their site yet, photographer Mario Testino gladly shared the photo on his Twitter account. And why wouldn't he? It's stunning.

Ratajkowski's British GQ covers not only serves as a reminder of her attributes. I'm also left wondering when she and Portman are going to play sisters in a film. That has to happen, right?

Make it happen, Hollywood. But for now, I can marvel at Emily x GQ.