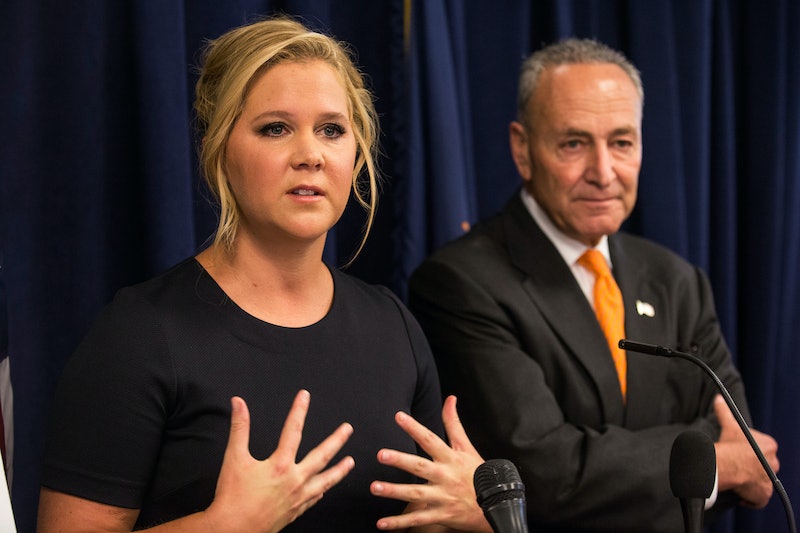 Amy Schumer is more than just a funny feminist actress and comedian — she's proving herself to be a gun control activist, too. After two people were killed and nine injured in a shooting at a Louisiana showing of her film Trainwreck on July 23, she's taking a stand. Amy and her second cousin, Sen. Chuck Schumer, unveiled a new gun control initiative at a press conference in New York City on Monday, detailing a plan to combat gun violence.

Amy Schumer declared that the shooter should never have been able to get a gun in the first place, and continued, "Critics scoff and say there's no way to stop crazy people from doing crazy things, but they're wrong." So what did the Schumer duo propose at the conference? Here are the details of their three-part plan.

First, according to Politico, they want a system of rewards and penalties to encourage states to submit certain records, such as those about felons, spousal abusers, and the adjudicated mentally ill, into a national system of background checks. Second, they plan to pressure Congress to provide full funding for mental health and substance abuse programs. Lastly, they want states to better handle involuntary mental health commitment — when someone is court ordered to get mental health treatment. The two want the Department of Justice to investigate the states' different standards of involuntary commitment for mental health treatment, as well.

"We're here to say enough is enough," Sen. Schumer said. "We can't just sit back and allow mass shootings to become commonplace ... How many breaking news flashes will it take for Congress to act?" Quotes like that filled the emotional press conference, as Sen. Schumer also said, "There are so many killings, so many needless killings, that every day the movement grows." Amy Schumer called his proposals "sensible" and said that, though she anticipates a backlash for standing up for gun control, she wants to be proud of the way she's living, and she thinks about the victims every day.

The Schumers' press conference came after the request of an Amy Schumer fan who has seen suffering because of gun violence. According to Mashable, on the day after the Trainwreck shooting, Sarah Clements, the daughter of a Sandy Hook survivor, urged the actress to speak out against gun violence in an open letter on Medium. Clements wrote:

I know deep down that the tweet you sent after the shooting was not all that you’ve got. And we need your voice in this movement. We need your help ... Join our movement. Write an op-ed. Support an organization. Demand change. Be a voice for our generation and for women — two groups who make up most of the victims of the gun violence in our country. As you said and as I’ve learned, what truly matters in life is how you decide to write your own story. And in doing so, don’t apologize to the frightened millions who resent that they never had it in them to do it. Instead, show them it can be done.

The heartfelt letter did not go unnoticed, Schumer tweeted a week later in response, "Don't worry I'm on it. You'll see."

True to her word, Schumer held the conference on Monday. She capped it off with an inspiring example of how she and other feminists will work to create change:

Women are always under great threat of violence, just statistically, When these sort of things happen we mourn, and then we get angry, and it'll just make us fight harder.