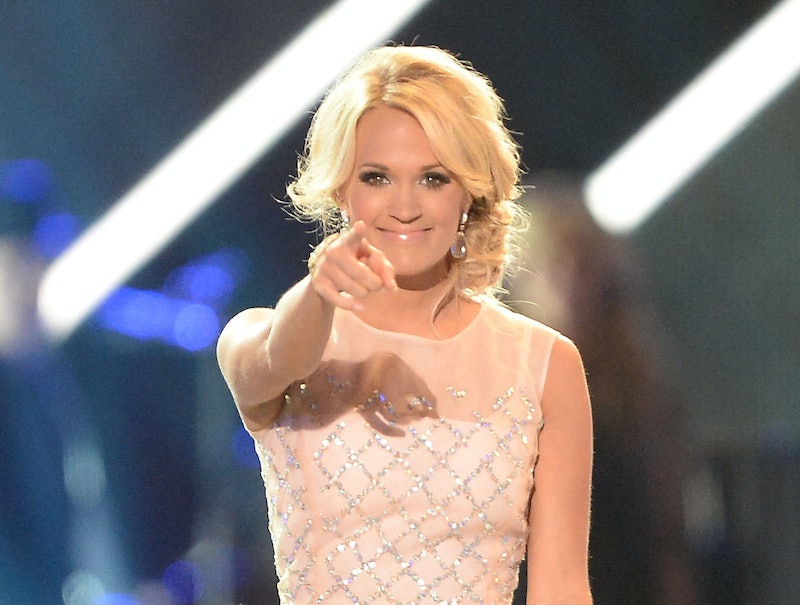 It's one of the most beloved musicals of all time, and Thursday night 1965's The Sound of Music is being reinvented for television. Julie Andrews will be swapped with American Idol alum Carrie Underwood, Captain von Trapp will be played by True Blood's Stephen Moyer (sink your teeth into that one), and the singing band of von Trapp kiddies will be crooning for three hours (albeit including commericals) on NBC. While the classic flick was due for a reboot, Underwood and her singing counterparts have some pretty giant shoes to fill. Will the made-for-TV special live up to the original? Here's 10 things we hope to see in Thursday's special.

Oh, how they judge Maria so. If Maria were a problem, how would the nuns solve her? How would they catch a wave upon the sand? With their worrisome chants and bobbing heads, we love these nuns just as much as the free-spirited Maria. And it is them of course, who save the von Trapp family from nazis in the end. (And no, I didn't think a "spoiler alert" was necessary, because if you haven't seen The Sound of Music by now, there's really nothing I can do for you).

2. Maria Running Through the Hills

It's the most iconic image from Roger and Hammerstein's 1960's film, an image encompassing the "Can't Be Tamed" essence of Maria, and the pure joy of imagination, daydreaming, and being in the great outdoors. How they will capture this during a live performance is unknown, but we hope they try. A wind machine, perhaps?

3. Sexual Tension Between Leisl and Rolf

He might be a Nazi, but we can play naive while Leisl and Rolf sing "16 Going on 17" together in the pouring rain. It's hard to deny the chemistry between these teenage love birds, and we only hope the live version will offer just as much chemistry (and perhaps some of those impressive bench leaps mid-song).

"I'm Kurt and I'm incorrigible!" is to this day one of my favorite non-sequitur shout outs. It's a scene which depicts the first time Maria will meet her soon-to-be children. It's the first time she proves that she is not like the other governesses. She treats the children like people instead of animals to be kept in cages, and she shows the children that she needs them just as much as they need her. D'aww.

While we are one-thousand percent against the use of real, live animals for stage performances or any performances, we really do love the scene where Maria finds a frog in her pocket. But considering it's not the only trick the children use to scare off Maria, perhaps the live version should stick with her sitting on a pinecone and blaming her surprised outcry on "rheumatism."

6. Matching Outfits Made of Curtains

The original queen of crafts, Maria used her old drapes to create "play clothes" (cue Capt. von T saying "What the f*ck are play clothes?") for the children. They look very much like drapes, with an odd greenish-yellow pattern, but the whole gang looks absolutely delightful running through the market throwing fruit, picnicing, and boating on the lake.

7. The intimate dance scene between Capt. and Maria

The attraction is building, but there's obstacles: She's the governess, and he's engaged. During a ball, Maria steps out of her house clothes and into a lady-like dress, and when the Capt. takes notice and asks her to dance, the longing is spoken through unblinking eye contact and dance. Here's hoping Underwood and Moyer have half that amount of chemistry on live television.

The children's choreographed numbers are half the fun of The Sound of Music, especially ones involving a makeshift clock and cuckoo-ing owls. We can't wait to see how this scene will be interpreted in the live version, and who will carry little Gretl up the stairs.

9. Hiding in the Church

While the majority of the musical is fun and games, things take a serious turn when the von Trapps are hunted down by Nazis. Maria leads them to her old home, the church, where they attempt to hide among the tombs and sculptures in the dark, only to be confronted by Rolf. It's a scene that elicits a sense of fear for the family, the moment we think their newly perfect lives might come crashing down. How this will be adopted to a live version with a set is questionable, but we hope the TV version can provoke the same primal feelings.

So we know from the promos that Carrie Underwood doesn't chop off her hair for this role, but I have to admit, it's sort of disappointing. From Charlize Theron to Jennifer Lawrence, this year has been abundant with women chopping their locks for the sake of a role or for the sake of fashion, and it would have been fun to see Underwood take the plunge for Maria. (But I suppose those Swedish looking crossed braids are pretty cute, too.)