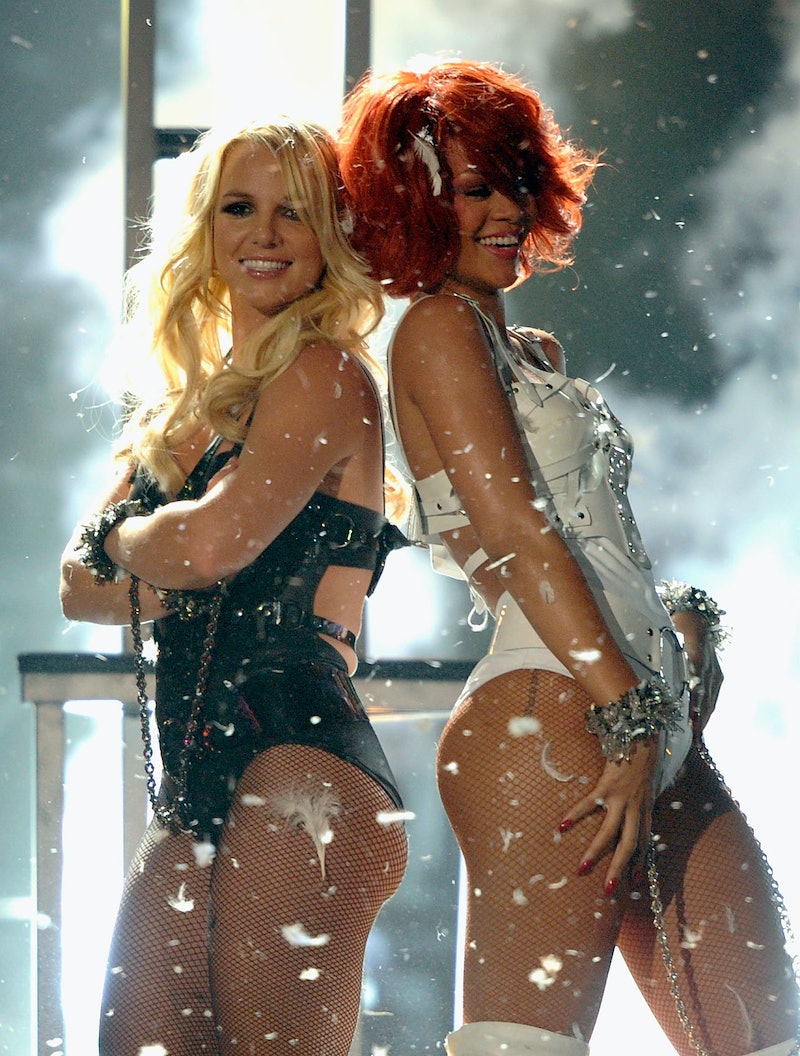 On April 11, 2011, pop superstars Rihanna and Britney Spears premiered their "S&M" remix, and the world changed forever. This is how I'm pretty sure the memorable collaboration came to be: "S&M" was released as the fourth single from Rihanna's wildly successful Loud album at the beginning of 2011. Radio stations embraced the raunchy tune — but Rih wasn't satisfied. I think she wanted to create an unforgettable pop music event so "S&M" could become her 10th No. 1 hit. So, on April 1, 2011, she asked her millions of Twitter followers: "Who do you guys MOST wanna see me collaborate with on a song?" The overwhelming response? Spears.

At this point, I assume Rihanna's people got in touch with Spears' people, and a few days later, the "S&M" "rih-mix" was born. The addition of Spears' vocals led to a significant sales boost, which helped the track to finally reach the summit of the Billboard Hot 100 chart. Mission accomplished.

I've been obsessed with Rihanna and Spears' "S&M" remix since it debuted over four years ago — but not because it’s a great pop song or anything like that. No, I love it because it's a beautiful disaster (and I say that as a huge fan of both artists). Allow me to explain why...

As I mentioned, it's thought that the "S&M" remix came together in just a few short days. The tragic single cover — which may or may not have been created with Microsoft Paint — seems to support this theory. Apparently, there wasn't enough time to do a new photoshoot, so the designers just decided to poorly splice together two stinky leftover shots and call it a day! This was the best thing they could come up with for two of the world's biggest pop stars? Amazing.

I have a lot of questions about Spears' hilariously over-the-top "S&M" verse. For example, was it recorded with a Talkboy? Was Spears snorkeling at the time? (Is that why it sounds like her nose is plugged?) And why are the lyrics so explicit?? The lyrics to the original version of "S&M" are mostly just suggestive — but Spears really ups the ante:

Just one night full of sin

Feel the pain on your skin

It's your turn to hurt me, yeah

If I'm bad, tear me down

'Cause the pain is my pleasure

Where to begin? It's packed with iconic moments.

And when Spears slowly rises from beneath the stage dressed as the bunny from Donnie Darko:

And when the pair nails this seriously intense bit of choreography:

And when a pillow fight breaks out for some reason:

And when Rih and Spears are clearly having the best time ever:

That's what it's all about, I suppose.

Now do you understand why I called Rihanna and Spears' "S&M" remix a beautiful disaster? Get out there and spread the beauty, my friends!

More like this
Britney Has Been Granted A Restraining Order Against Her Ex-Husband
By Bustle Staff
What Is Ariana Grande's Net Worth? When It Comes To Money, She Has No “Problem”
By Hugh McIntyre
Zooey Deschanel Can't Be Anyone But Herself
By Samantha Leach
Sadie Sink Would Escape Vecna From 'Stranger Things' With This Taylor Swift Song
By Grace Wehniainen
Get Even More From Bustle — Sign Up For The Newsletter